Yaacov Agam and the Mystical Number “9”

I am often asked about the significance of the number “9” in Yaacov Agam’s art.

Yaacov Agam, as the son of an Orthodox Rabbi, possesses a deep interest in Hebrew mysticism. The study of the most mystical aspect of Hebrew beliefs is called “Kabbala.” Kabbala is millennia old and extremely esoteric, secretive and illusive to grasp. Students of Kabbala spend their entire lifetimes attempting to penetrate the hidden meanings and interpretations of the subject.

In the language of Hebrew (one of the world’s most ancient still in use) every letter of the alphabet has a hidden meaning found in each letter, vowel and accent. Each letter in Hebrew also represents a number. Hebrew, unlike many other languages, never developed separate numerical symbols. The ancient Hebrews also believed that God’s “language” could be perceived in mathematics. When contemplating the perfection of mathematics, formulae, its infiniteness (microcosm/macrocosm) and man’s need for mathematics to create our physical existence, it is easy to see a “metaphysical” aspect to numbers as well. This is the basis for the pursuit and penetration into the mysticism of numbers and mathematics in Kabbala.

As Agam considers his works of art to be “visual prayers” or creations which each reflect upon the metaphysical, he chooses to incorporate factors of 9 into each work to “resonate” this purpose. Therefore, in an Agam “prismograph” for example, there are 9 prisms used. The edition size (180) is a factor of 9. The number of colors used in the print is divisible by 9 (I don’t know how many there are, but trust me). If you measure the distance between the prisms, the length, width and depth of the prisms, the sizes of each rectangular space used, the distance from the edge of the frame (white acrylic) to the image, the thickness of the frame, etc. these dimensions will all be divisible by 9 in centimeters. Agam incorporates his Kabbalistic beliefs directly into the physicality (form) of the art he creates.

This is only a single aspect of the layers of meaning in Agams’s work. In particular, I find the things he says about his own work most illuminating. Remember, he created his concept, his “credo,” more than 60 years ago and it has never changed. It has continued to sustain his limitless creativity and to be a template for the creation of his art which has filled the world. There is not (nor has there ever been) anyone like him as an artist in the world history. This is one of many reasons why I personally believe he can arguably be considered the most important artist alive in our time. We are indeed honored to have his art and his enduring relationship to Park West Gallery with us each day. 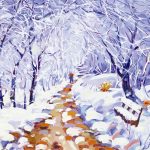 The Weather Outside is Frightful, But Art is so DelightfulArtists & Special Collections 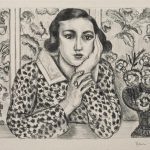 Focusing on Matisse as a Printmaker at the Tampa Museum of ArtArt & Gallery News, Artists & Special Collections, Exhibits, Henri Matisse