Happy Halloween! Whether it’s the thrill of a good scare or the love of a fantasy world, everyone has a different reason to celebrate Halloween.

Ranging from creepy to comical, here are some of our favorite works of art that remind us of the Halloween spirit: While many enjoy Halloween as a night to embrace fright, others delight in the imagination of dressing up as someone else. Absurdist artist Michael Cheval is a perfect example of this imagination: embracing the peculiar while re-imagining the world. Perhaps most well-known for his horrifying etchings, Francisco Goya‘s works of art are haunting and eerie. Often portraying death and darkness, the Old Master’s artwork embodies the fright many associate with Halloween night. Aside from the creepy costumes and scary startles, Halloween is a night for children to go trick-or-treating. Park West Gallery represents animation art from studios like Columbia Pictures Television, where artwork from “Ghostbusters” portrays the childlike side of spookiness. Michael Godard‘s “naughty” olives are often up to no good, so it would make sense to find them in a Halloween-esque painting. In “Hell on Earth,” Godard takes a humorous twist on a dark place, complete with his signature dirty martini.

To view a wide assortment of artwork, stop by our gallery in Southfield, Michigan or check out our Fall Sale. 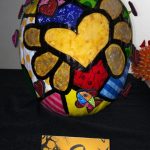 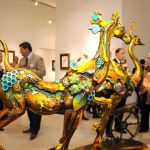