Autumn de Forest answers questions about the painting she just completed for a group of museum guests and the press at the opening of her exhibition at the Butler Institute of American Art. (Photo credit: Doug de Forest)

Autumn de Forest, who is collected around the world and represented by Park West Gallery, has promoted art education in U.S. schools and received an international award from the Vatican.

As of this month, the 14-year-old art prodigy can add yet another accomplishment to her growing list: Opening her first art exhibition at a museum.

The Park West Foundation and the Butler Institute of American Art present “Autumn de Forest: The Tradition Continues,” featuring original works of art by Autumn until June 26 at the museum, located at 524 Wick Ave. in Youngstown, Ohio.

UPDATE: Due to popular demand, the exhibition has been extended to Oct. 16.

“It is almost unbelievable to me to be appreciated and recognized by such a major American fine art institution,” Autumn says. “It’s truly an honor and perhaps one of the greatest compliments I have ever received.” This is the second exhibition in 2016 to be underwritten by the Park West Foundation, the non-profit arm of Park West Gallery. The first was an exhibition at the Museum of Geometric and MADI Art featuring Yaacov Agam. Foundation Director Diane Pandolfi states that the goal of the exhibitions is to promote art awareness.

“Park West Foundation was proud to sponsor Autumn de Forest as an American artist in her first museum exhibition held at the Butler Institute,” Pandolfi said.

Not only is this the first museum exhibition for Autumn, but she is also the youngest artist to hold an exhibition at the Butler museum. Butler Executive Director Louis Zona said the quality of work created by this young artist is marvelous, adding that “Autumn de Forest is by any measure, a child prodigy.”

Autumn spoke with a crowd of 50 museum patrons during an artist presentation on April 9, providing insight into her creativity by demonstrating her “pull painting” technique. Pandolfi recalls the astonishment of the crowd as they witnessed Autumn in action.

“The viewing public, including eager children, watched in amazement as this young artist shaped an image on canvas during her live demonstration,” she says. “Word about Autumn traveled quickly, resulting in an enthusiastic crowd gathering to see Autumn and her impressive exhibition.” Autumn also met with the public at an opening reception held April 10, giving patrons the chance to meet the teenager behind the art.

“Autumn responded with poise and confidence to the numerous questions asked during her two days at the Butler, revealing herself as a lovely and very talented young artist,” Pandolfi says.

According to the Vindicator, the museum was also fascinated by her artwork. Says Zona:

“Before we agreed to the show, we wanted to see her work, and we were immediately won over by how sophisticated they are for a young person.”

Autumn started painting when she was 5 years old. Since then, she has created representational and abstract art, all while experimenting with different techniques and mediums. She is self-taught, studying books about artists such as Salvador Dali and Pablo Picasso. She is influenced by other notable artists throughout history and pays tribute to them in her art, including Andy Warhol, Grant Wood and Georgia O’Keeffe.

Autumn has been featured in numerous TV appearances, has sold more than $1 million in artwork and contributes to numerous charitable causes. In 2015, the Vatican awarded her the International Giuseppe Sciacca Award for Painting and Art. As the exhibition’s name suggests, Autumn comes from a long lineage of art world figures. These include Lockwood de Forest (1850-1932), Autumn’s great-great uncle who was a painter with the Hudson River School; George de Forest Brush (1855-1941), an American painter with the Western School of Art; and Roy de Forest (1930-2007), a pioneer of the California Abstract Expressionist movement.

Her family tree also includes Robert Weeks de Forest (1848-1931), a great-great uncle who served as the president of The Metropolitan Museum of Art.

A full-color catalogue of the artwork accompanies the exhibition, and a national tour is being planned. The museum is open Tuesdays to Saturdays 11 a.m. to 4 p.m. and Sundays from noon to 4 p.m. 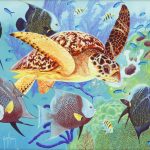 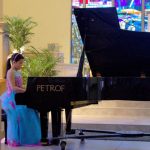