If you were in Seattle at the end of July 2019, you might have seen something BIG happening on the waterfront. Wyland, one of the most successful marine wildlife artists in the world, spent four days painting his 101st mural on the side of Seattle’s Edgewater Hotel.

Park West Gallery was there to capture this massive undertaking on video and, as you can see, Wyland packed an amazing amount of work into just a few short days. 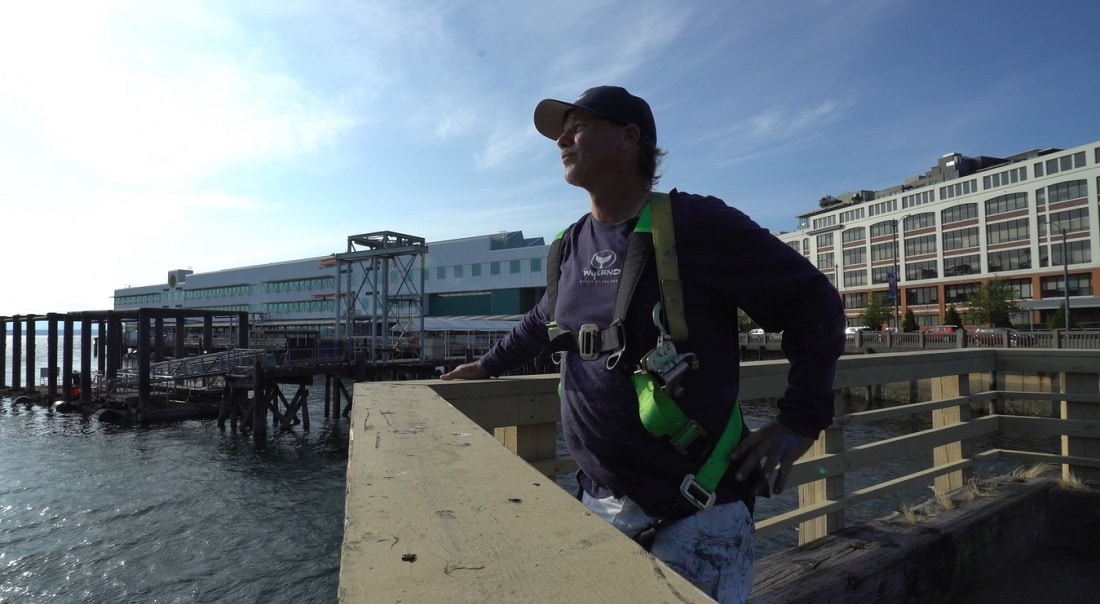 Wyland takes a step back and looks at his new Seattle mural.

Wyland has become internationally famous for his “Whaling Wall” murals—an over 30-year project where he creates full-sized portraits of whales on the sides of buildings from Detroit to Beijing.

Wyland actually painted his 100th mural in China as part of the celebration for the 2008 Summer Olympics and, at the time, assumed that the project was over. He told Park West, “I never thought I would paint more than a hundred but apparently I am. I’m right in the middle of it right now.” 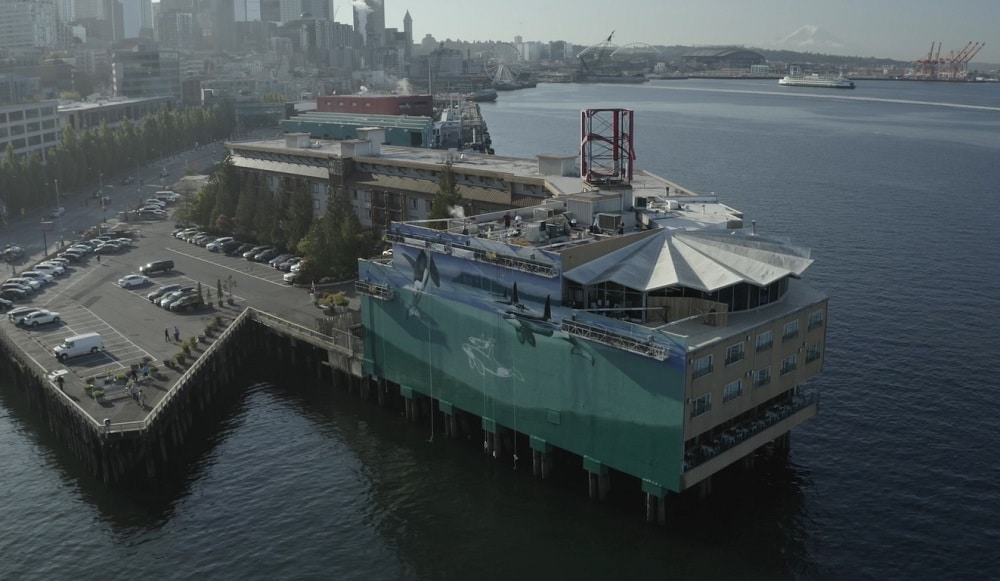 Bird’s-eye view of the in-progress mural on the side of Seattle’s Edgewater Hotel.

There was a special reason, however, why Wyland felt compelled to bring his 101st mural to Seattle. The city had been the home to his fifth “Whaling Wall” mural on the side of the Edgewater Hotel on Elliott Bay, which he had painted in 1985. Unfortunately, that mural was painted over by the property owner in 1995.

This year, the new management of the hotel invited Wyland back to Seattle to create a new mural in the place where his original mural had been. The updated mural shows a family of orca whales from the “J-Pod” of orcas that make Elliott Bay their home.

It was an intense four-day painting schedule for Wyland, but he was blessed with fantastic weather and even a few surprise helpers. Most notably, Eddie Vedder, lead singer of the band Pearl Jam, came down to lend his support and even got onto the scaffolding with Wyland to do some painting. 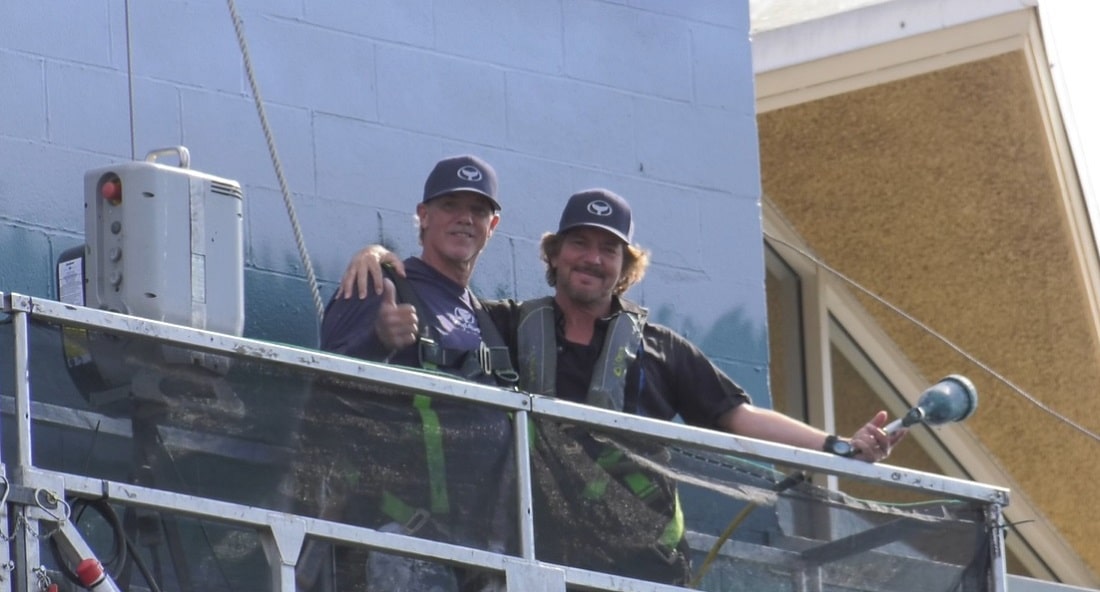 Wyland and Eddie Vedder at work on the mural.

At the mural’s dedication ceremony, Wyland told the crowd about why he continues to create murals around the world.

“The whole project started in 1981 when I did my first Whaling Wall in Laguna Beach,” he said. “And it’s always been about art and conservation equally. When I was a kid growing up, I was inspired by Jacques Cousteau, I was inspired by Greenpeace and the first Earth Day. I thought to myself, ‘Man, we’re damaging the very source of life on the planet, not only for these beautiful whales that depend on clean water and healthy oceans but for all of us.

Wyland at work on his very first Whaling Wall in Laguna Beach, California in 1981.

“So I thought, early on, that art could really play an important role in bringing the message of conservation. I decided after I painted that first one in 1981 that I would do a hundred of these ocean murals.”

Taking a look at his new creation, Wyland said, “I’m really proud of this mural. It’s a number 101 and I think it’s my best one. We need an environmental renaissance period and I think we’re in it. Art could play a very important role. I knew that from the beginning. When you do art on a grand scale, it really captures the imagination of people.” 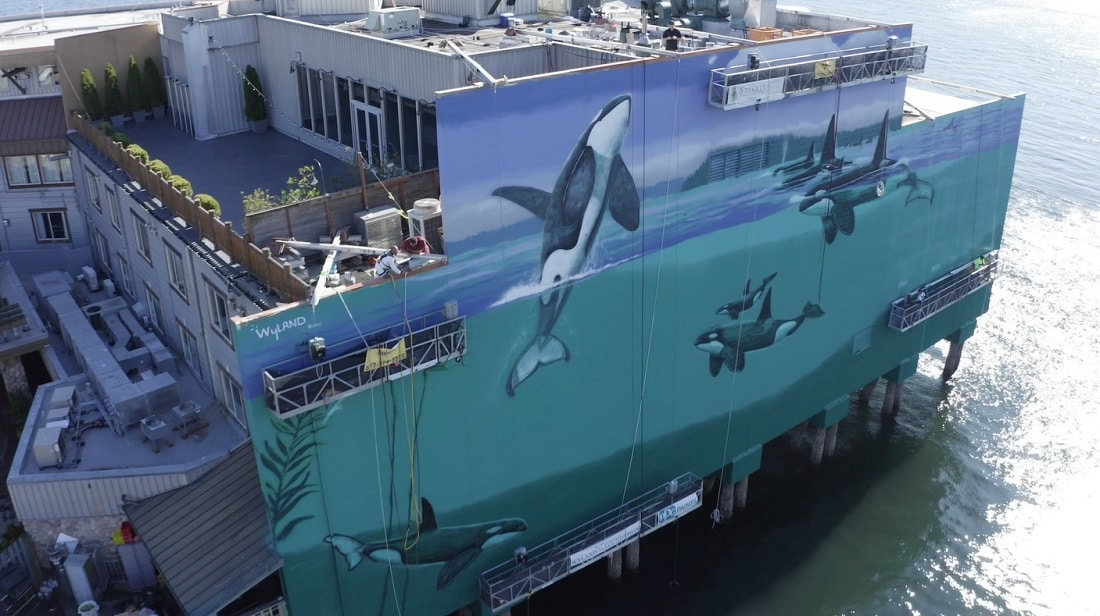 A look at the finished Seattle mural.

If you’re interested in collecting the art of Wyland, contact our gallery consultants at (800) 521-9654 ext. 4 during business hours or sales@parkwestgallery.com. 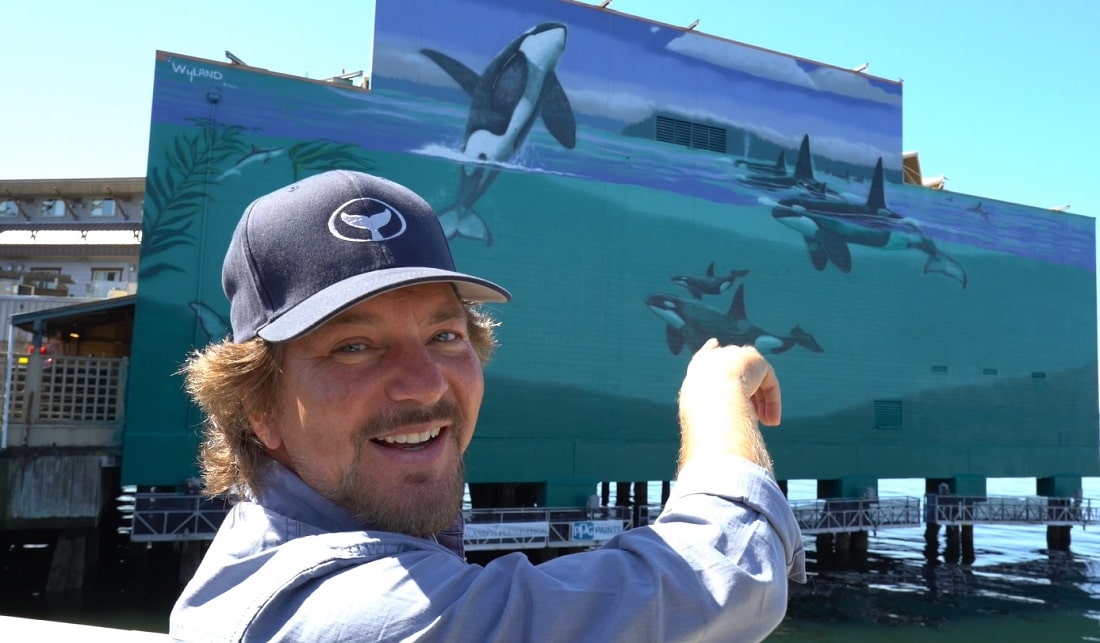 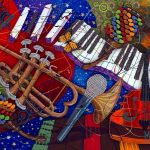 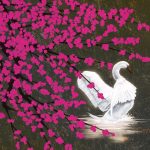