Renowned marine life artist Wyland helped change the way people think about the environment when he started painting his evocative, life-sized murals of whales on the sides of buildings in the 1980s.

Today, Wyland’s artwork can be found in museums, corporate collections, and private homes in more than 100 countries. He resides in Laguna Beach, Islamorada, and the north shore of Hawaii.

In 1971, Wyland’s life would change forever. At the age of 14, he witnessed migrating grey whales while on vacation with his family. The event inspired him to use his artistic talents to advocate for the future of clean water, healthy oceans, and the majestic animals within.

“As the environmental movement grew in the early ‘70s, I was an artist that was right there and heard the call for conservation,” Wyland says. 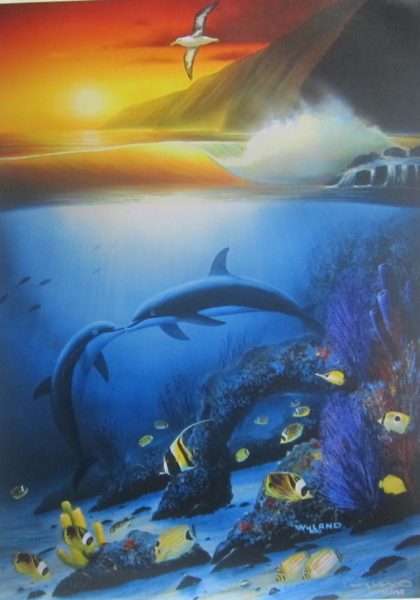 Wyland attended the College for Creative Studies in Detroit from 1975 to 1979. He later moved to Laguna Beach where he lived as a self-described “starving artist.” In 1981, he spray-painted what would become the first of his “Whaling Walls”—life-size images of whales—on a wall facing a Laguna Beach parking lot.

Thanks to the popularity of his murals, Wyland garnered the attention of collectors and wildlife advocates alike. By 1997, Wyland’s artwork—including smaller paintings, sculptures—had become a huge success. Merchandise featuring his imagery was available at zoos and other outlets.

In wake of the impact that first life-size mural in Laguna Beach had, he vowed to donate his time and effort to paint 100 whale-themed murals in cities around the world. He finished this massive project in 2008, with the creation of a mile-long series of internationally themed canvases as part of the cultural festivities for the Olympic Games in Beijing.

Today, the name Wyland has become synonymous with environmental conservation. He continues to use his marine life paintings, sculptures, and photography to inspire others about the importance of marine life conservation, and has expanded his outreach with his award-winning non-profit foundation. 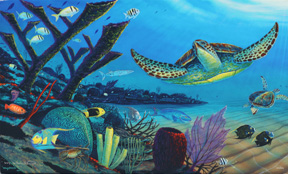 His life, like his art, takes him everywhere, from the Antarctic ice shelf on a photo expedition to document climate change to a grassroots journey down the Mississippi River.

“I think being an artist is one of the coolest gigs on the planet,” Wyland says. “It is the greatest job you can have.”

For his compositions, in particular his murals, Wyland believes in the wisdom of “less is more.” He seeks to make an impact by depicting the simplicity of nature, which in turn highlights its complexity.

Wyland credits famed oceanographer Jacques Cousteau as a major influence on his art and career. He recalls watching Cousteau’s television specials in the ‘60s and ‘70s, and credits the French explorer for instilling “an entire generation of people like myself” with a love for the ocean. 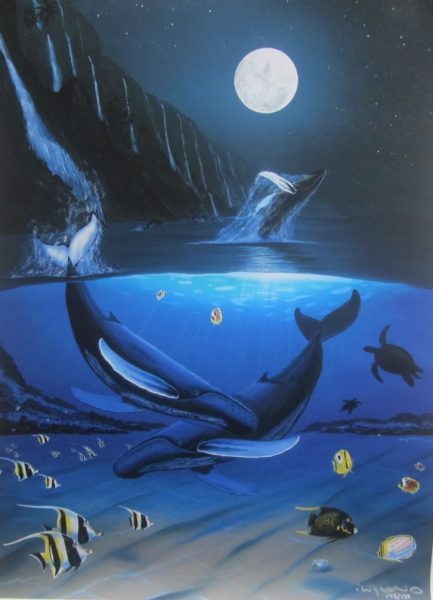 Much of Wyland’s art is inspired by diving with and photographing whales, dolphins, and other marine wildlife. His up-close studies of these animals in their natural habitats provide Wyland with reference materials to draw upon when creating his compositions.

Wyland typically begins by sketching onto the canvas in pencil, then paints basic details based on these sketches before painting in his background. From there he brings his subjects to life utilizing a wide array of vivid colors.

If you were in Seattle at the end of July 2019, you might have seen something BIG happening on the waterfront. Wyland, one of the most successful marine wildlife artists in the world, spent four [...]

Watch the Aquatic Art of Wyland Come to Life

Wyland remembers the first time he saw the ocean. He was fourteen years old, visiting Southern California when he first encountered the Pacific Ocean. The experience changed the course of his [...]