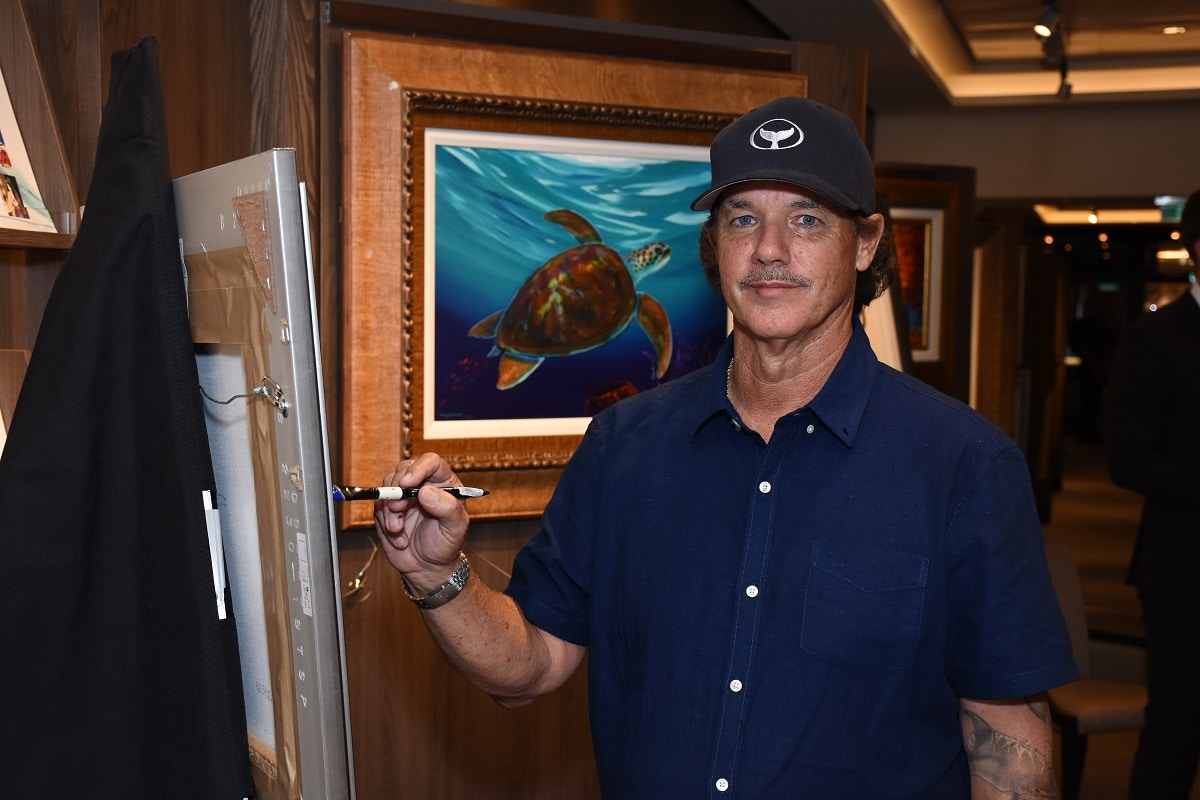 Wyland painting on board Norwegian Bliss, 2018.

As an artist, Wyland is used to working on big canvases.

He first rose to fame in the 1980s painting life-size murals of whales—that’s right, life-size whales—on the sides of buildings all over the world. Known as the “Whaling Walls,” the colossal murals reflect the artist’s outsized passion for marine wildlife and his commitment to raising awareness about environmental conservation.

“As the environmental movement grew in the early ‘70s, I was an artist that was right there and heard the call for conservation,” Wyland says.

In 1981, he painted his first whale mural, “Gray Whale and Calf,” in Laguna Beach, California. It inspired Wyland to make a bold declaration—he was going to paint 100 whale murals in public spaces to help people better appreciate and value the diversity of life in our world’s aquatic habitats. 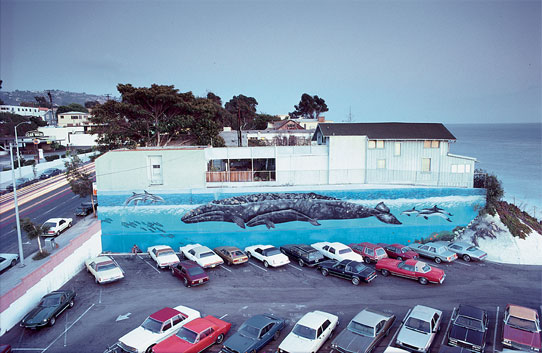 Wyland’s first “Whaling Wall” mural, “Gray Whale and Calf.” It was originally finished in 1981, but was repainted in 1986. (Image courtesy of the Wyland Foundation)

Twenty-seven years later, after embarking on one of the most ambitious public art projects in history, he accomplished that goal. His 100th Whaling Wall, “Hands Across the Oceans,” debuted at the 2008 Beijing Summer Olympics. Wyland worked with teams of students from around the globe to create the artwork’s 24,000-square-foot, half-mile-long series of canvas murals. 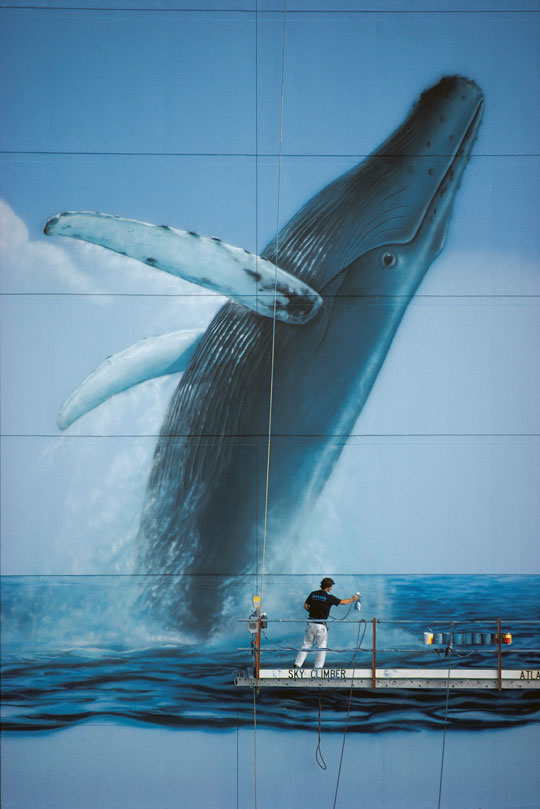 Wyland working on his sixth “Whaling Wall” mural, “Hawaiian Humpbacks.” It was originally dedicated in Honolulu, Hawaii in 1985. (Image courtesy of the Wyland Foundation)

But the completion of the Whaling Walls project didn’t dampen the artist’s interest in creating art on a massive scale.

2018 witnessed the launch of Norwegian Bliss, one of the 10 largest cruise ships of all time. When Norwegian Cruise Line went looking for an artist to paint the ship’s 1,082-foot-long hull, Wyland was a perfect fit for the job.

“Breach in the Starry Sea,” Wyland

Adorned with the artist’s trademark whales, Bliss’ hull almost functions as Wyland’s 101st Whaling Wall. The artist playfully refers to Bliss as “my ship”—“I mean, my name’s up there, right?”

Among the ship’s many amenities is a world-class art gallery from Park West Gallery, which hosts regular auctions, seminars, and exhibitions. If guests on Bliss fall in love with Wyland’s aquatic hull art, Park West carries artwork by Wyland in a variety of mediums—ranging from watercolors to giclées to one-of-a-kind works made exclusively for Norwegian Bliss. 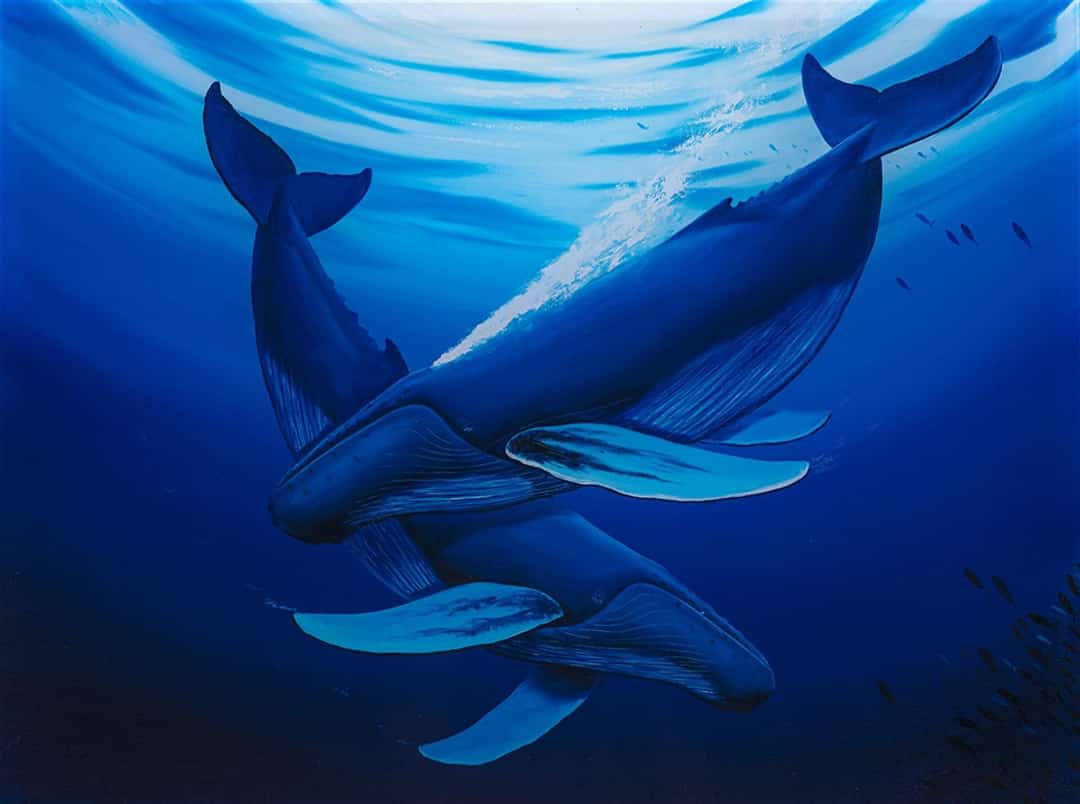 “I can’t think of a better place to present my art to all the collectors that are on the ocean,” says Wyland. “It’s a natural to have marine life art on a beautiful ship like this. This is kind of a floating canvas.”Chris Vounnou from Park West’s onboard Art Team concurs, noting that it’s fun to watch guests react as they get close to Wyland’s hull mural for the first time.

“People react in different ways,” Vounnou says. “The mural is simple yet complex, expansive yet minimalistic. More than anything, it really seems to inspire awe.” 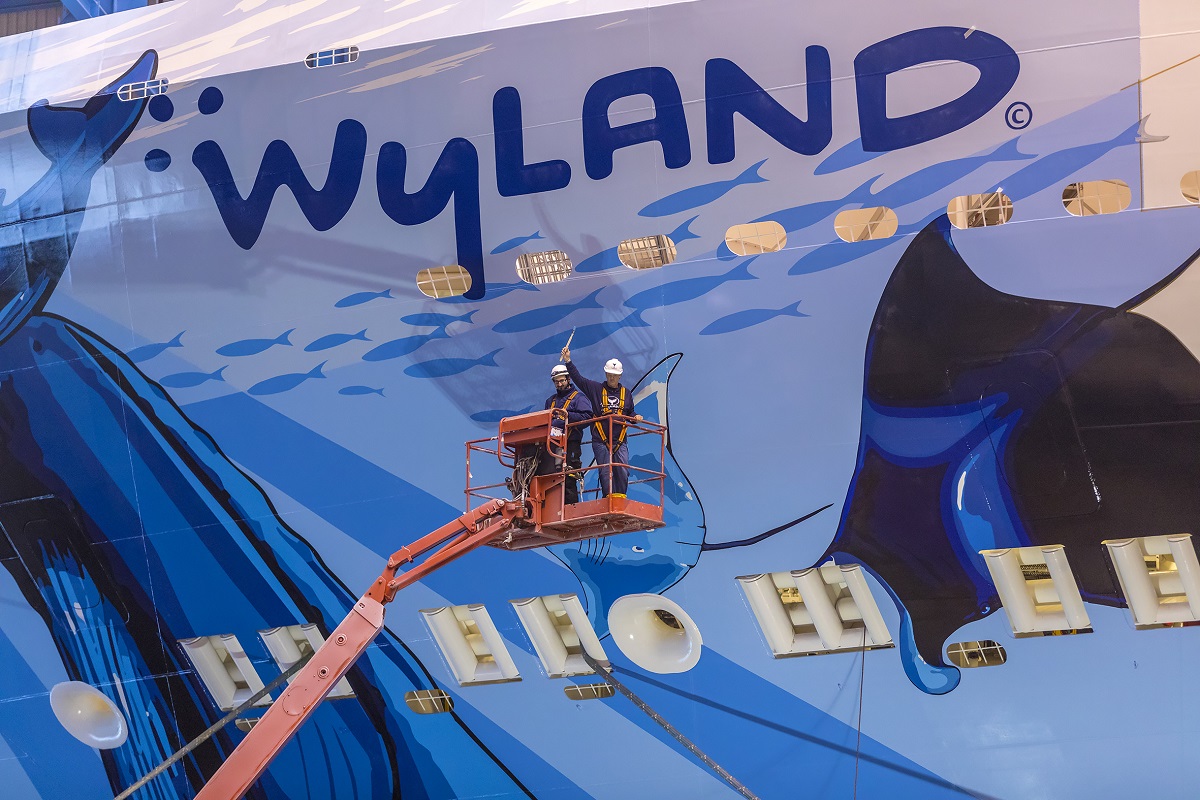 “Awe” is an appropriate word when talking about Wyland’s art. Over 30 years ago, he began painting his extraordinary whales, a giant-sized project that helped people remember how humbled and wonderstruck they should be by the majesty of our planet’s aquatic life.

That sense of awe has fueled every aspect of his career—from his art to his conservation work with the Wyland Foundation. Thanks to his undying enthusiasm for working on the biggest canvases possible, Wyland has transformed himself into one of the most influential artists of the 21st century.

You can learn more about Norwegian Bliss here. If you’re interested in collecting the art of Wyland, register for our exciting live online auctions or contact our gallery consultants at (800) 521-9654 ext. 4 during business hours or sales@parkwestgallery.com. 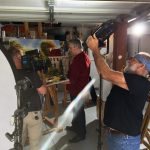 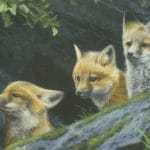