Thank you for inspiring me, Dad

Being a father has its challenges, but it also has its rewards. One of those priceless gifts is having a positive influence when raising a child, whether it’s inviting them to enjoy what you love, supporting their dreams or simply being there in good and bad times.

On this Father’s Day, we take a look at how fathers have played a role in inspiring the lives of Park West Gallery artists. Detroit artist Marcus Glenn is known for his “Flat Life” artwork that is heavily infused with music, especially jazz. Thanks to this unique style, Glenn had the honor of creating the official artwork for the 56th Annual Grammy Awards.

Glenn says his love of music was initially inspired by his father, who was an avid collector of jazz music.

“Being exposed and listening to his albums, it came naturally to me,” he says “My mom put a sketchpad in my hands and I was sketching his musical instruments and characters.” Nano Lopez creates bronze sculptures that combine his love of nature, science and creativity. He recalls going on trips with his family in Colombia that exposed him to textures and colors that inspire his works today.

Lopez’s father, Mauricio, was a chemical engineer working at a U.S. factory that produced copper sheeting. Lopez remembers the beautiful patterns created by the manufacturing of the sheets. His father also transformed the family bathroom into a chemical laboratory, which Lopez found fascinating with its beakers and flames.

“It was very colorful and beautiful and I remember loving it,” Lopez says. Park West Gallery is proud to represent a father as well as his son – Charles Bragg and Chick Bragg.

Charles is the son of Vaudeville performing parents, an influence seen in his satirical and humorous paintings. Charles has won numerous awards for his artwork, such as the Gold Medal for the National Society of Illustrators. He says he likes to buffer what he says with humor.

Chick is the son of two artists, and grew up painting and drawing. He has since become an accomplished draftsman, painter and printmaker. He was commissioned to design stamps for the U.S. Postal Service and has designed images for the Greater Los Angeles Zoo, The World Wildlife Fund and The Nature Conservancy, to name a few. “Garden of Eden” by Charles Bragg; “Life in the City” by Chick Bragg.

Yaacov Agam is often considered the “father of kinetic art.” His art has sold for record breaking prices, including the highest price ever paid for an Israeli painting, and has captivated the world since his first show in 1953. His artwork transcends the visible, actively engaging its viewers with movement and what he calls the “fourth dimension” of time.

Agam’s artwork is influenced by his strong Judaic upbringing, visually depicting the beliefs imparted to him by his father, Yehoshua Gibstein, who was a devout Rabbi and Kabbalist.

“The driving force and the source from which I draw my inspiration stem from my desire to give plastic and artistic expression to the ancient Hebrew concept of reality, which differs in its essence from that of all other civilizations, and which, to my mind, has never found its true artistic expression,” he says.

When it comes to a father encouraging his children, artists Charles Lee and his daughter, Jana, is a perfect example. Charles, a successful artist known for his bright paintings that utilize gold foil and rich textures, taught university art classes in Korea and owned an art school.

Jana grew up watching her father paint, and she excelled in art during high school. When it came time to study art after graduating, Charles suggested she learn from him. They both agree that these lessons advanced her career and skills more than any university classes.

This father-daughter duo not only have their own oeuvres, but they will combine forces and create paintings together. Marko Mavrovich has a broad range of subjects for his impressionistic paintings, including landscapes full of poppies, European scenes and figurative works.

Mavrovich cites his father, a watercolorist, as one of his influences for capturing the world around him on canvas. Mavrovich remembers sneaking into his father’s studio to watch him in action, and helping him smuggle oil paints over the Italian border as a teenager.

“For my father, everything around was a painting,” he says. “So I realized that he was painting a true feeling, and he didn’t have to invent anything. I began to emulate him. And it’s something I still carry to this day.”

At an exhibition held in March 2015, Park West Gallery celebrated the life and artwork of Pino, an Italian-American artist who revolutionized illustration and achieved further success with his fine art. Pino passed away in 2010, but his son, Max Dangelico, gave collectors a glimpse into his family life.

“I’m blessed to have him as a father,” Dangelico said. “He loved my mom, he loved my sister, he loved me, he was a great family man, and that’s all that matters in this world today is the family unit, and people forget about that.”

Of course, Park West Gallery wouldn’t be what it is without its “father,” Founder and CEO Albert Scaglione. Scaglione left a career as a mechanical engineering professor to pursue his passion for art, founding the gallery in 1969. Since then, Park West has brought the experience of collecting art to more than 1.8 million people around the world.

Albert’s son, Marc, is president of Park West Gallery. He says his father has inspired an excellent work ethic, and he admires his father’s ability to focus on the task at hand and his dedication to his business.

“His work ethic is just amazing, he got it from his father,” Marc says. “He started something so new with very little, and it’s the appreciation of that – starting something from virtually nothing into what it is today. These are all testaments to what he has done and who he is.” 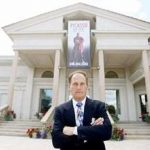 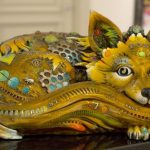