Michael Godard: Bringing Out the Fun in “Olive” Us Like a skilled mixologist, Park West Gallery artist Michael Godard is able to combine all the right ingredients in such a way that the end result is a delectable treat.

With their black backgrounds, shimmering drinks and lively olives, it is easy to pick out a work of art created by the “rockstar of the art world.”

“When people ask me to describe my artwork, I say I’m more of a storyteller, I tell the things that are about us and my experiences,” he says. “It’s about us, it’s about the things we enjoy, and I think people can relate to that.”

Godard’s paintings often feature animated olives and strawberries portraying anything from olives jumping into a martini glass pool to a fireman olive saving a strawberry damsel in distress. He also likes putting his spin on characters such as James Bond and Batman.

His experiences with family and friends are the ingredients behind the signature olives, grapes, strawberries and cocktails that populate his oeuvre. Godard says a friend of his once asked him to create a painting for him for his birthday. When Godard asked what he could paint for him, he suggested that Godard depict his favorite drink, a martini with olives.

Godard’s creativity flourished with the idea, adding arms and legs to the olives. To differentiate their genders, he decided the males would have their pimentos on the top while the female olive pimentos would be “strategically placed elsewhere.” Since his characters don’t have faces, he uses body language to convey emotions.

The theme expanded to grapes when one of Godard’s aunts saw his olive paintings and suggested he create similar art for wine lovers. He painted a work that depicted grapes taking field sobriety tests while receiving tickets.

He realized he could paint anything he wanted when using alcohol as a theme. Godard says despite not being a big drinker, alcohol became the vehicle he uses to communicate themes and narratives in his paintings.

“Like food, alcohol is a very social thing, it is what we do to celebrate a birthday, a graduation, we toast at a wedding, we have a couple of beers when we’re watching football with our friends,” he says. “I think people can relate to the alcohol part of it because it is celebrating life.”

The Devil’s in the Details Like a splash of vermouth enhancing a martini, those who are extra sharp can catch subtle, hidden aspects in Godard’s works. These include names, numbers, initials or dates.

“You really need to look close because a lot of those things will tell the actual story,” he said. “As you put the elements together, you’ll understand what the story is all about.”

Take, for example, his “He Devil, She Devil – Devil’s Tail” painting. In it, a male olive courts a female olive by a martini glass, their innocence hinted at by halos. However, their shadows tell a different story, with horns replacing the halos and the olives going crazy. If one looks closely, they can even see a lemon peel curled in the martini’s shadow, transforming it into a twisted martini.

“It’s sort of showing the two sides in ‘olive’ us,” Godard says of the artwork.

If you’re interested in adopting one of Michael Godard’s olives and bringing his artwork into your home, you can contact our gallery consultants at (800) 521-9654 ext. 4 or sales@parkwestgallery.com. 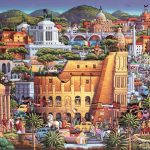 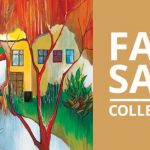