David “Lebo” Le Batard calls his innovative art style “Postmodern Cartoon Expressionism,” and who better to explain that concept than the artist himself?

Postmodernism is a recent movement that contradicts aspects of modernism, involving movements like installation art and conceptual art. Postmodern art combines high and low culture, using pop culture imagery alongside aspects from past periods like the Renaissance and Baroque.

Ever since he was a child, Lebo studied comic strips and cartoons, finding inspiration from cartoonists like George Herriman. To him, cartoons encompass a variety of facets, including everything from Egyptian hieroglyphics to Saturday morning cartoons. He says he likes cartoons for their direct approach to telling a story.

“To me, a cartoonist is somebody who expresses themselves visually and in a very direct manner and a very approachable manner,” he says. 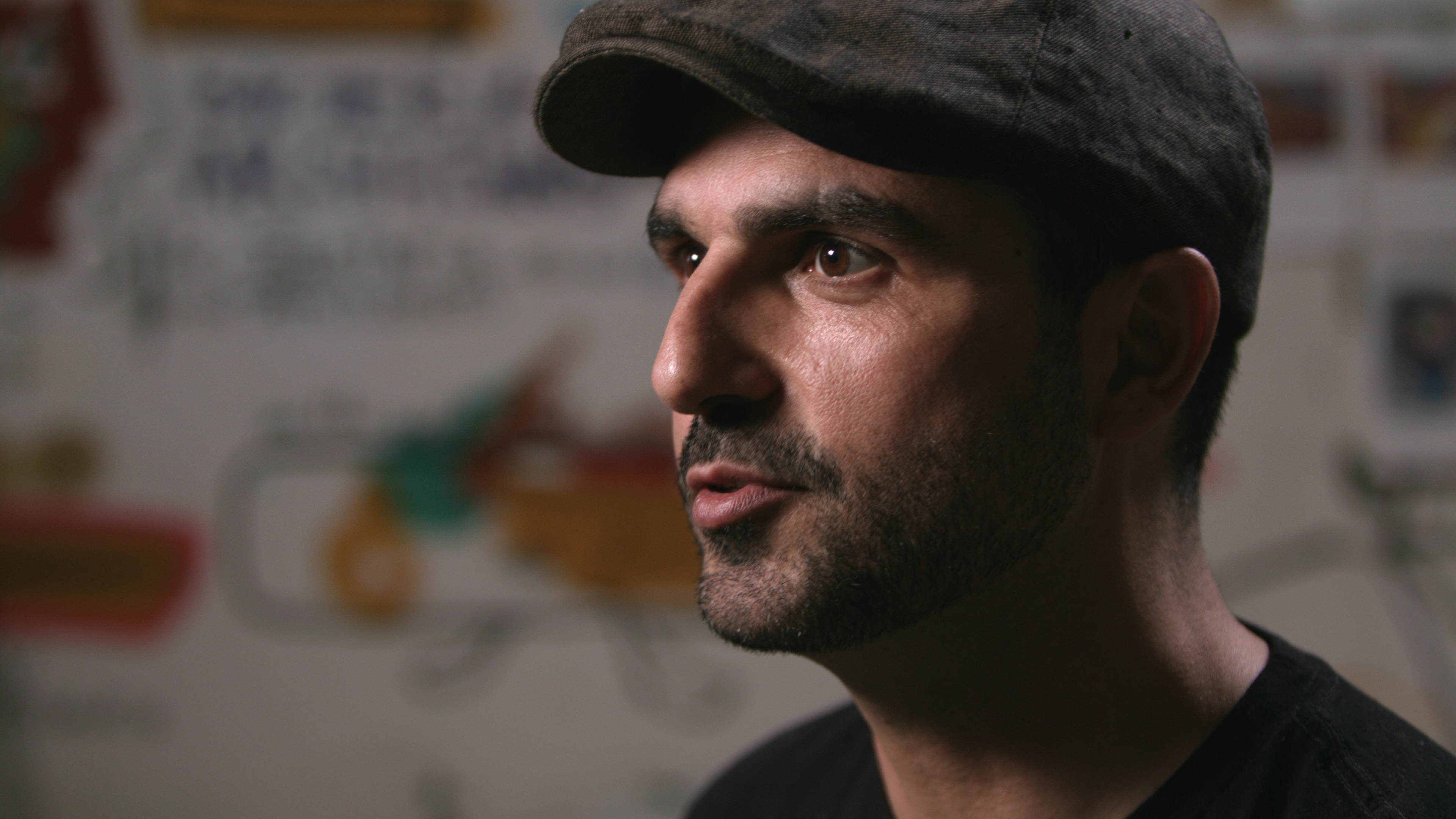 Over the years, he continued to expand his horizons and study all types of visual records, such as ancient iconography and indigenous art from civilizations like the Aztecs, the Sumerians and Inca.

Lebo says the expressionism aspect of his style comes from “pouring his heart and soul” into his art and developing his own vocabulary and storytelling methods. By expressing arts and sciences through cartoons, he gives the ideas and his interpretations a vibrant voice accessible to anyone. 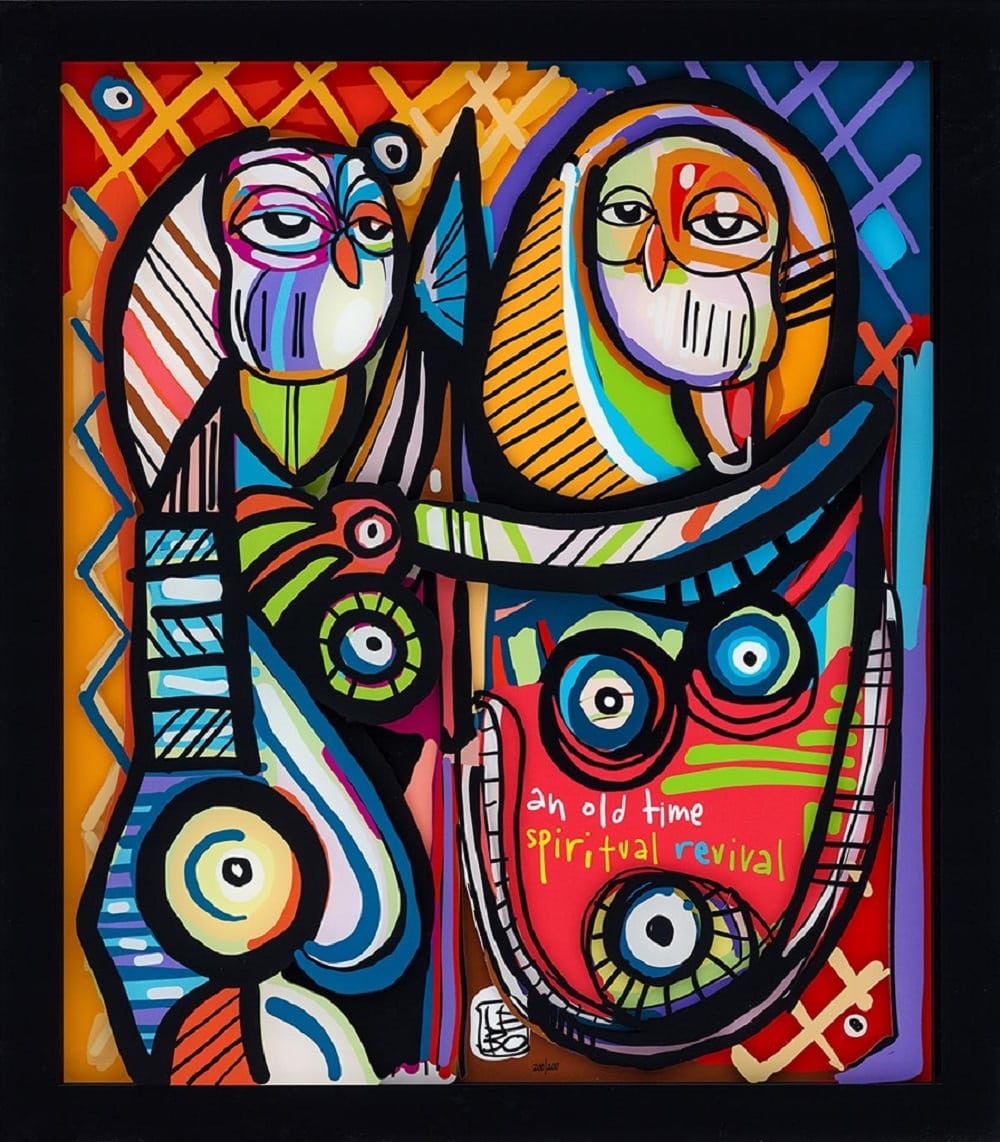 Lebo’s art process begins by researching a subject, whether it’s science, history, music or metaphysics, and taking notes or sketching out ideas. From there he explores the ideas and expands on them in his art.

“Within the storytelling part and narrative aspect of what I do, the research that goes into it is the cornerstone of it,” he says.

By combining esoteric subjects with imagery that draws in the eye (like his cats and owls), Lebo says he is not only able to challenge himself, but challenge the viewer and encourage them to research the meaning behind the symbols. 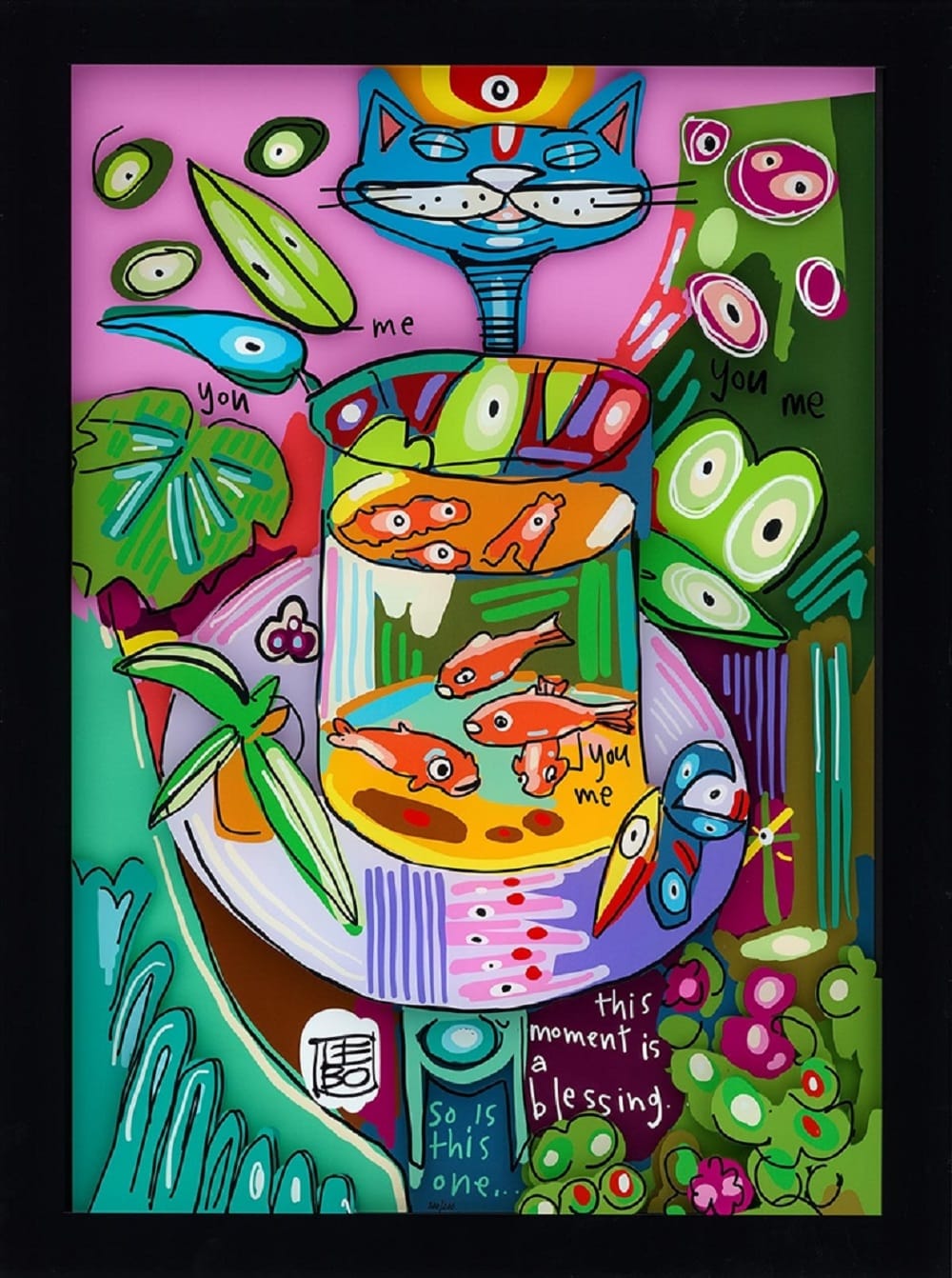 “You can take the most obscure, weird stuff in the world and combine it all together, but if you put a cat in the middle of it, people will get engaged by it, and that’s really cool, and I don’t think there is anything wrong with that,” he says. “You have to make it identifiable to who we are today.”

As much as he loves his imagery, Lebo is just as fond of using phrases and words in his works. He says he will write down phrases he hears or reads, which he then incorporates into his paintings as subtexts that complement the art.

“By playing with lettering and handmade fonts you can actually play with the composition, so it’s just another way to tell that story and engage the viewer even more,” he says. 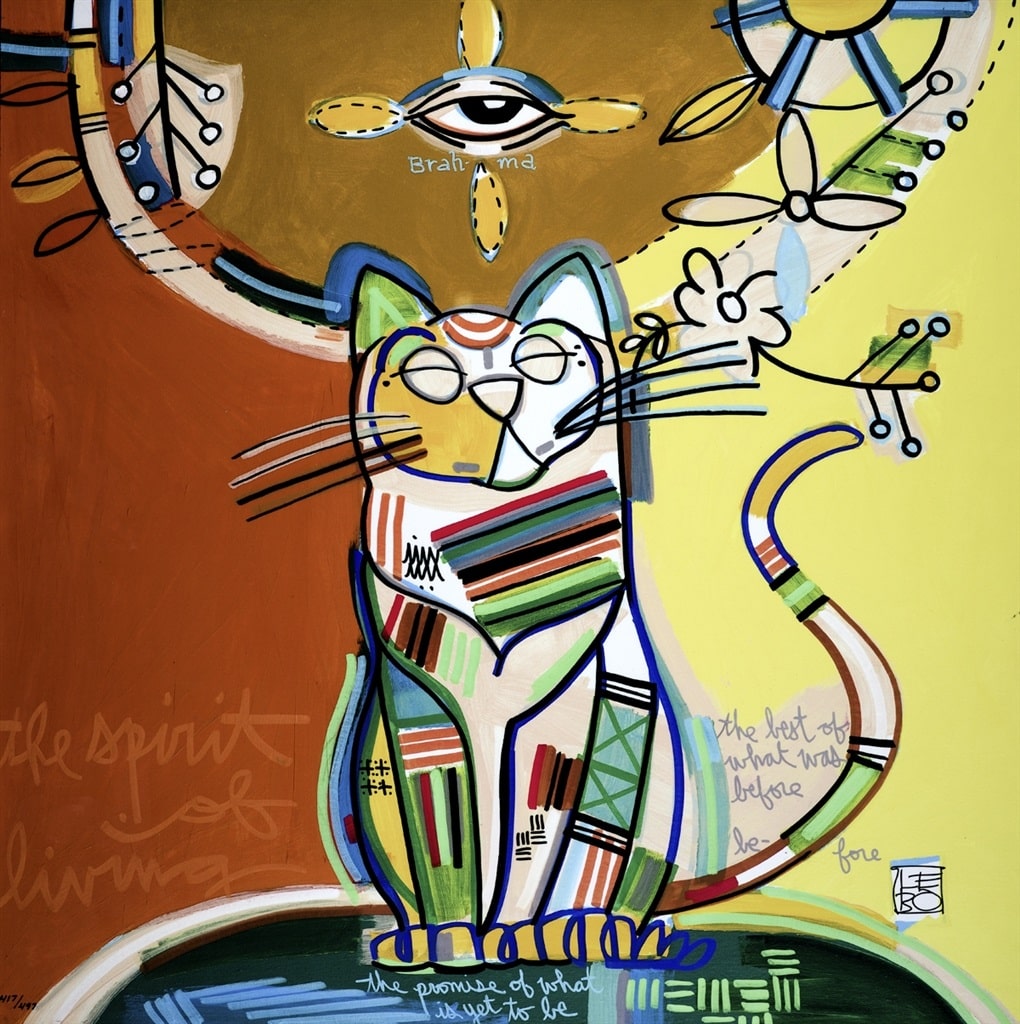 Lebo gravitates toward stories and narratives that lean toward hope or hopefulness, an expansion of his own pursuit for more harmony and consciousness in his life. However, he prefers to let the viewer interpret their own narratives.

Similarly, he says there are overtones in his artwork that are drawn from spirituality across the ages, whether it’s Buddhism or Nordic myths. For instance, by studying the way goddesses of love are portrayed throughout mythology, he observes similarities amidst different cultures.

“It’s discovering similarities, researching them, and the themes that I want to fill my life with, so that is love, spirituality – things that I think speaks to something much higher,” he says. 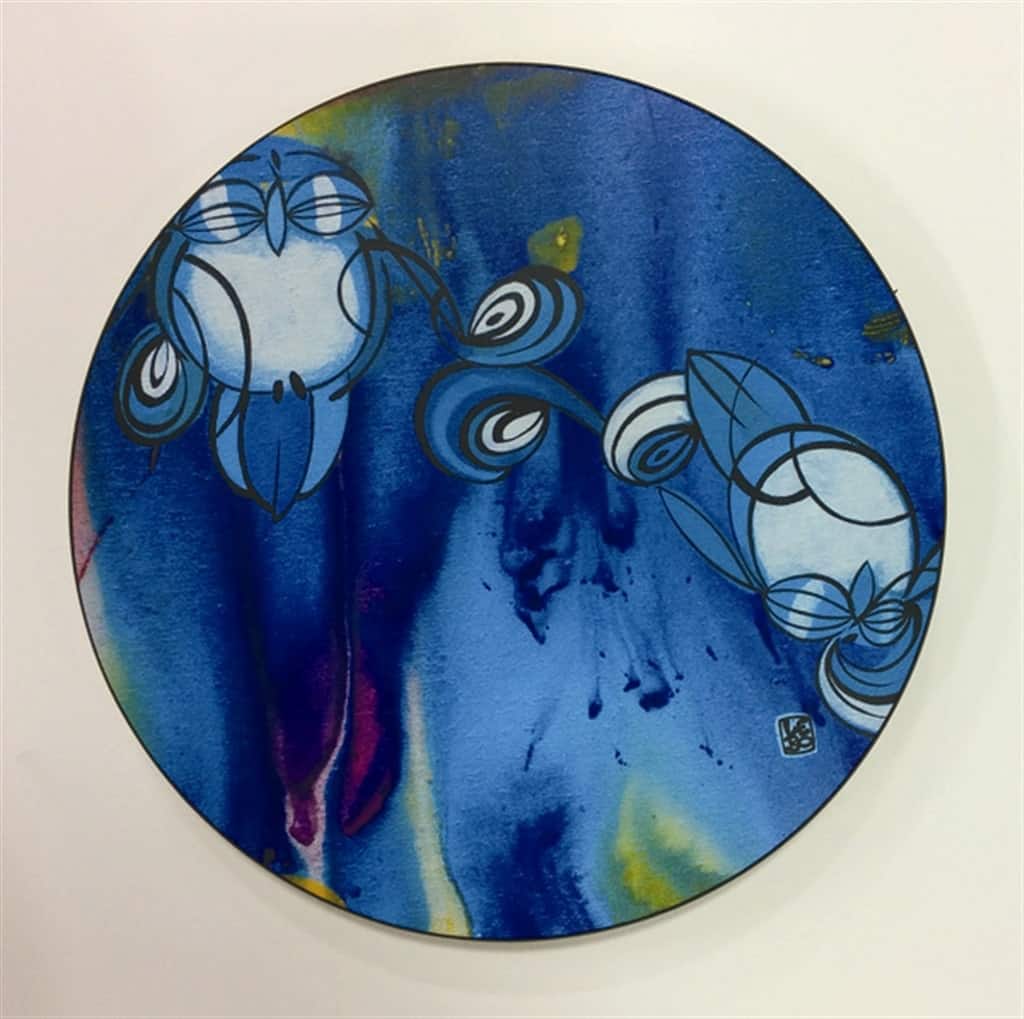 Iconography plays a big role in Lebo’s artwork. After studying prehistoric art in school, he realized how “profoundly elegant” ancient art is, and it inspired him to research further into symbolism. Since cartoons are themselves symbols with humanistic qualities, Lebo loves to infuse his art with symbolism.

“It’s not anything I’m making up, these are things that I’m discovering, and they’re available to all of us,” he says. “Then you meet people that are also into those things and you learn more about it and you share it. There is a communion in that.”

If you’re interested in collecting the art of Lebo, register for our exciting live online auctions or contact our gallery consultants at (800) 521-9654 ext. 4 or at sales@parkwestgallery.com. 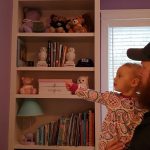 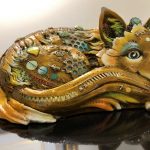