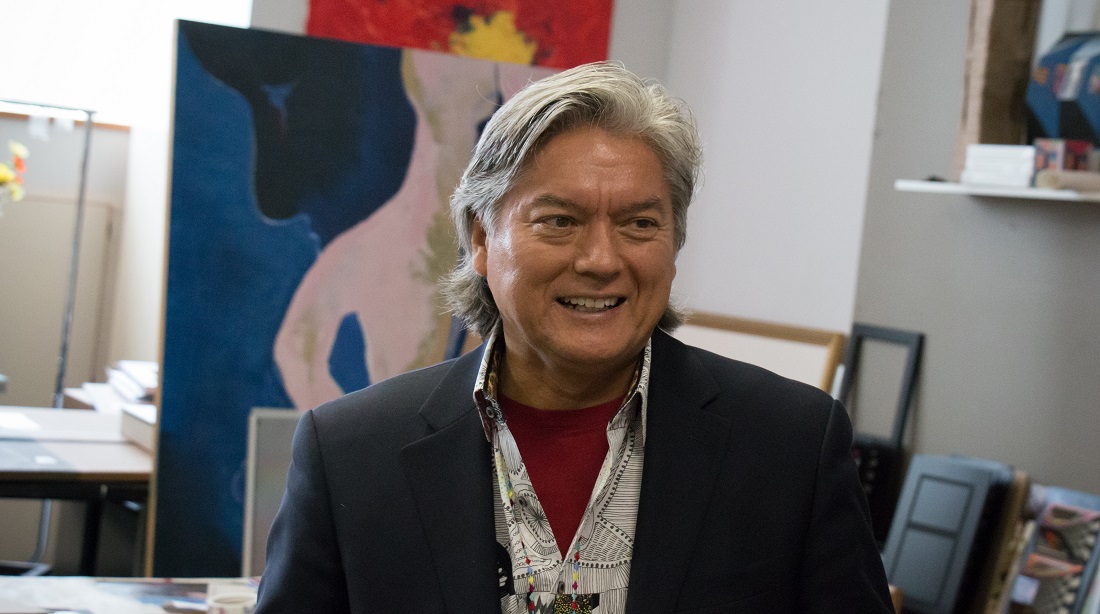 “Behind the Artist” host Morris Shapiro describes artist Dominic Pangborn as “one of the most creative people” he’s ever met.

Pangborn’s artwork is often noted for its “evolutionary” tendencies because the artist firmly rejects adhering to just one static artistic format. In Pangborn’s words, “I like to create things, invent things, and make things, so I can never be pigeonholed into just doing a painting.”

He studied graphic design at the prestigious Chicago Academy for the Arts and later apprenticed with the Ed Jaster Studio before eventually moving to Detroit to open his own design firm—Pangborn Design. After opening new Pangborn Design branches in Chicago, New York, and Tokyo, Pangborn decided to return to his early passion for fine art and, today, he has legions of collectors around the world.

Park West’s Morris Shapiro recently interviewed Pangborn for the “Behind the Artist” podcast and their conversation was so wide-ranging that we split it into two episodes. You can find both episodes now on the Park West Podcast page or download the episodes on iTunes or Stitcher.

During the interview, Pangborn talks about his childhood in Korea, coming to America, his adventures in art school, developing his design company, and embracing fine art.

Enjoy these excerpts from their conversation: 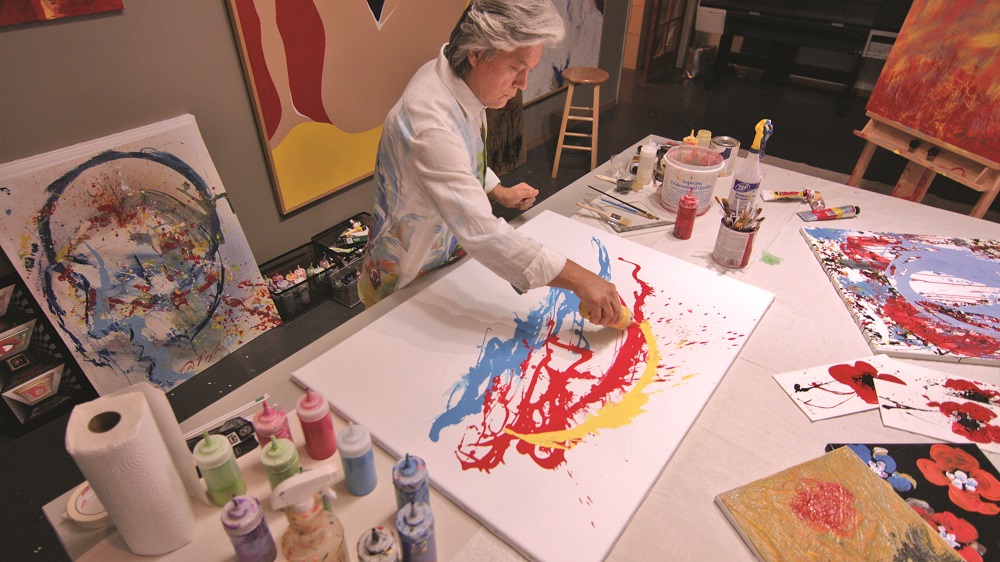 Pangborn at work in his studio

Dominic Pangborn on how he first discovered his love of art:

It’s one of those things that it was pure accident, to be honest. I went to a dime store for one thing. I wanted to buy a small transistor radio. When I went to get that radio, I saw their display of acrylic paint. There was a little set of maybe a dozen tubes of paint and brushes. And there was a pamphlet on how to paint portrait and another one how to paint landscape.

I bought this set and I basically snuck it home because I didn’t want anybody to know that I wanted to do this.

Dominic Pangborn on deciding to go to art school:

I went to Sister Rose Gilbert, the head of the art department at my high school, and I said, “Sister, I want to go to art school.” She got so excited. She said, “Oh my God, I’m so glad.” I said, “What do you mean?” She says, “You are an incredible artist.” So I said, “Well, then, why didn’t you tell me that?” She replied, “I wanted you to make that decision.” 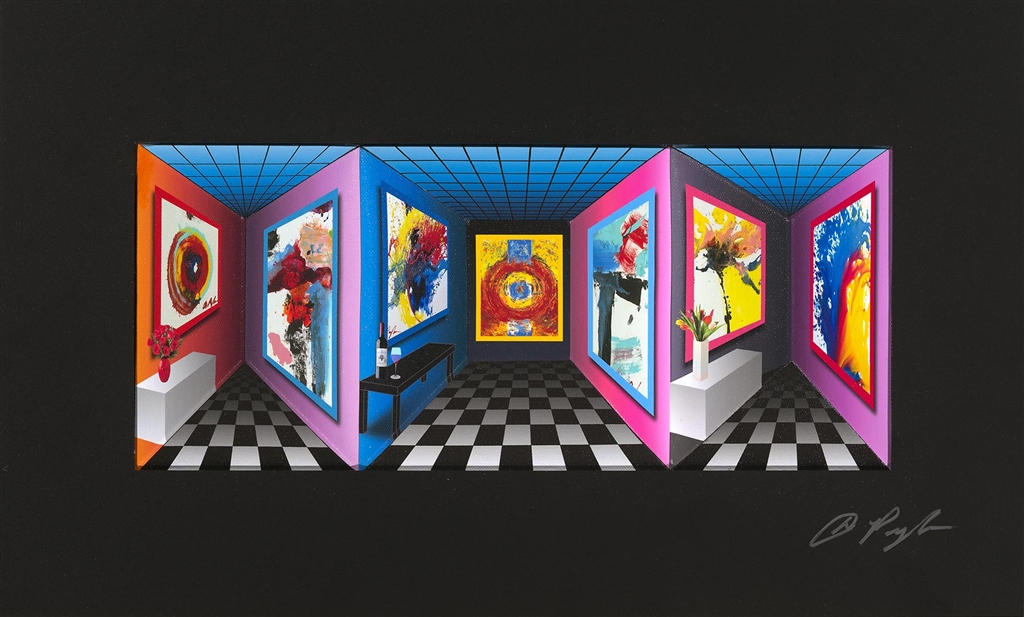 Dominic Pangborn on what he likes about fine art:

Fine art has always been a pleasure for me. What was so beautiful in my situation was that, unlike many other artists, financially, I was very successful. So I didn’t have to paint for the sake of making money. So I got to be creative. Create things the way I want to create. I didn’t have to be at the mercy of an art gallery telling me what to paint.

I think that’s the major difference between Park West and any other art gallery is that Park West doesn’t ever tell their artists, “Well, you’re known for poppies so I don’t want to see anything but poppies.” 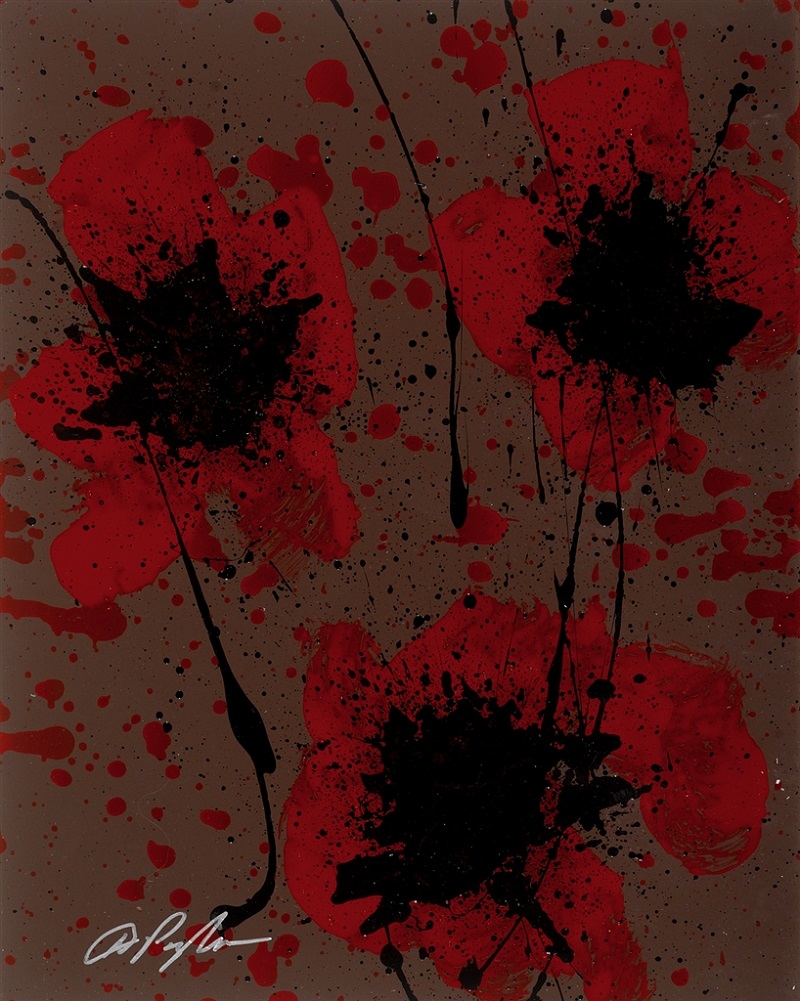 Dominic Pangborn on the difference between fine art and commercial art:

Fine art is really about your personal expression. It is what I want. As you start to do work for commercial, it’s really outside of you. So, by having that commercial training, it really helps in the world of fine art. I do think of what I want to create but, at the same time, I also think about what the people want. I have an understanding from both sides. 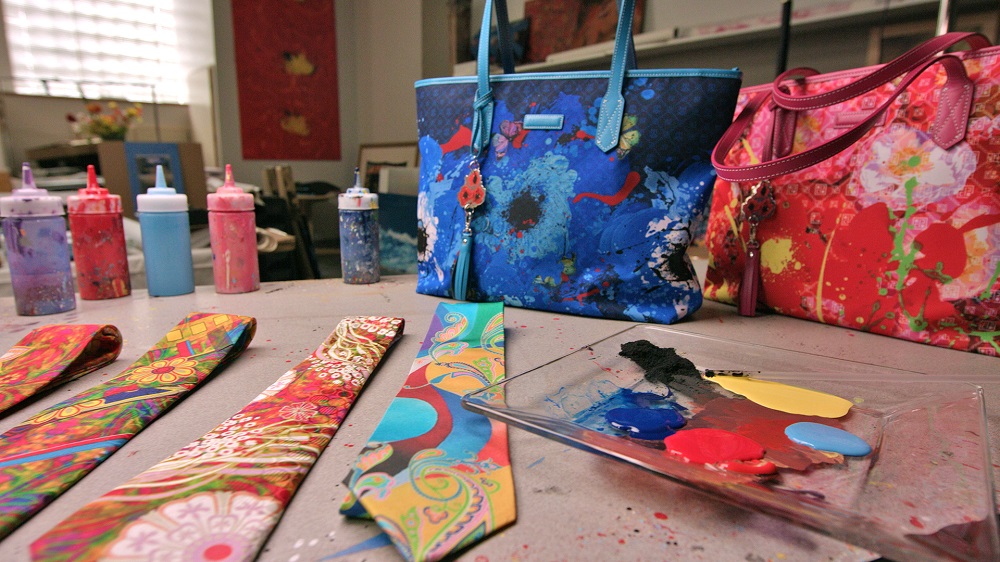 Some of the custom ties and purses from Pangborn’s design career.

Dominic Pangborn on his creative process:

One of the things I try not to do is have a preconceived idea. Sometimes, I have zero thought. I might pull out 10 canvases and I just start throwing some paint on them. Or I’ll take a charcoal pencil and I’ll do a little quick swish and, all of a sudden, that action drives me to the next level. The best way I can describe it is like playing a game of chess. You move your pawn, now you’ve got to counter-move, then you make your next move. It’s the same thing with the art. 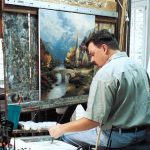 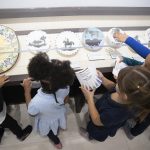