French artist Henri de Toulouse-Lautrec is considered one of the great masters of Post-Impressionism. Although exhibitions of Toulouse-Lautrec’s work were not well received in his lifetime, he is now one of the world’s most popular artists, represented in most major museums of France and the United States. Learn More at Park West Gallery Artist Biographies >

BOSTON, MA — More than 30 bold and subtle posters, prints, and paintings representative of the bohemian nightlife of late 19th-century Paris are presented in Café and Cabaret: Toulouse-Lautrec’s Paris at the Museum of Fine Arts, Boston (MFA). The French aristocrat Henri de Toulouse-Lautrec (1864-1901), one of the most famous artists of the Post-Impressionist period, is known for his striking images of performers in the centers of Parisian entertainment in the 1880s and 1890s, specifically the café-concerts and cabaret nightclubs in the neighborhood of Montmartre. Toulouse-Lautrec spent most of his time in this lively section of the city — where women danced the Cancan at places such as the Moulin Rouge — and chronicled in his canvases and lithographs the extravagant nightlife of Parisian dance halls and nightclubs.

Despite his short life, Toulouse-Lautrec was enormously productive and succeeded in developing a style uniquely suited to the celebrity culture of the raffish district of Montmartre, where he and other privileged sophisticates went “slumming” in the late 1800s. He had a genius for caricature that captured the signature features and body language of his subjects, who included his friends, the singers and dancers May Milton, Jane Avril, and La Goulue (“the glutton”). He accomplished this with the radical use of broad flat colors, strong silhouettes, and unusual points of view. Toulouse-Lautrec was heavily influenced by the Japanese prints discovered during this time and incorporated Japanese design elements in works.

Toulouse-Lautrec incorporated into his own highly individual vision stylistic elements from various contemporary artists, including the French painter Edgar Degas. Toulouse-Lautrec inserted himself into his images of nightclubs and hung his work in the cabaret Le Mirliton, one of his many haunts. He also designed advertising posters for his good friend the singer, comedian, and showman Aristide Bruant.

In addition to works by Toulouse-Lautrec, Café and Cabaret highlights evocative images of Parisian nightlight by several other celebrated artists of the period, including Pablo Picasso’s painting Stuffed Shirts (Les Plastrons) (1900), Théophile-Alexandre Steinlen’s poster Collection of the Chat Noir (1898), and Pierre Bonnard’s lithograph At the Theater (1895).

Café and Cabaret: Toulouse-Lautrec’s Paris is now on view through August 8, 2010. 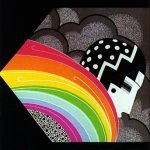 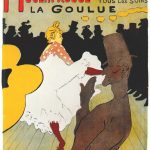