SOUTHFIELD, Mich.,  Aug. 28—A special group of Detroit-area young women and men enjoyed the once-in-a-lifetime experience of meeting Muhammad Ali in person, thanks to an educational program sponsored by the Park West Foundation, in association with Park West Gallery. Park West Gallery founder Albert Scaglione and his wife Mitsie accompanied the young Detroiters to Louisville last week to visit with the international boxing legend at the city’s acclaimed Muhammad Ali Center.

“Muhammad Ali, perhaps more than any other living celebrity, represents a universal standard of personal excellence, dignity and achievement,” said Scaglione. “He is an inspiration to the world, and our young friends are returning with stories and motivation that will last a lifetime.”

The young women and men — Jewel Rich 19, Latasha Posey 19, Dayanna Holland-Womack 14, Calisia Clinkscale 19, Shaina Riser 19, Steve Curry 18, Dondraill Thomas 17, Derica Clinkscale 18, Latoya Posey 18 — who are aging out of foster care and are beneficiaries of Park West Foundation’s FAMILY project, did not go to Louisville empty handed. They, along with their mentors Saba Gebrai and Weusi Olusola, presented Muhammad Ali with an award expressing their thanks and admiration for the Olympic Gold Medal winner and three-time heavyweight champion of the world.

“It was emotional to watch the movie about his life,” said Latasha Posey. “It was great that he didn’t give up. He kept fighting for what he believed in and that’s what he said to us, never give up.”

“It was inspiring, moving and educational for each and every youth to embody the message of finding the greatness within through the spiritual journey of the life and work of Muhammad Ali,” said Gebrai. “I was simply in awe to be in his presence. We are grateful to him, his wife Loni and the Muhammad Ali Center for their gracious reception of our youth from Detroit.”

Albert Scaglione has gifted several paintings by Park West Gallery artists Simon Bull and Peter Max, and rare Ali signed photographs to the Center. “We anticipate that over time these important works — which celebrate a man who has lived as a champion inside and outside the boxing ring — will become part of this extraordinary Center’s permanent art collection.”

Visitors to the 60,000 square-foot museum and learning center, which opened in 2005, are able to view a selection of Ali-inspired art in a dedicated Part West Gallery exhibit area. Featured are a number of Ali action portraits by famed British artist Simon Bull, each signed by Ali and Bull. “The chance to both portray a legend and have him sign your work is a dream most artists never have the opportunity to fulfill,” said Bull. 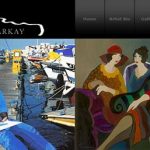 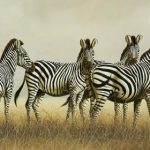