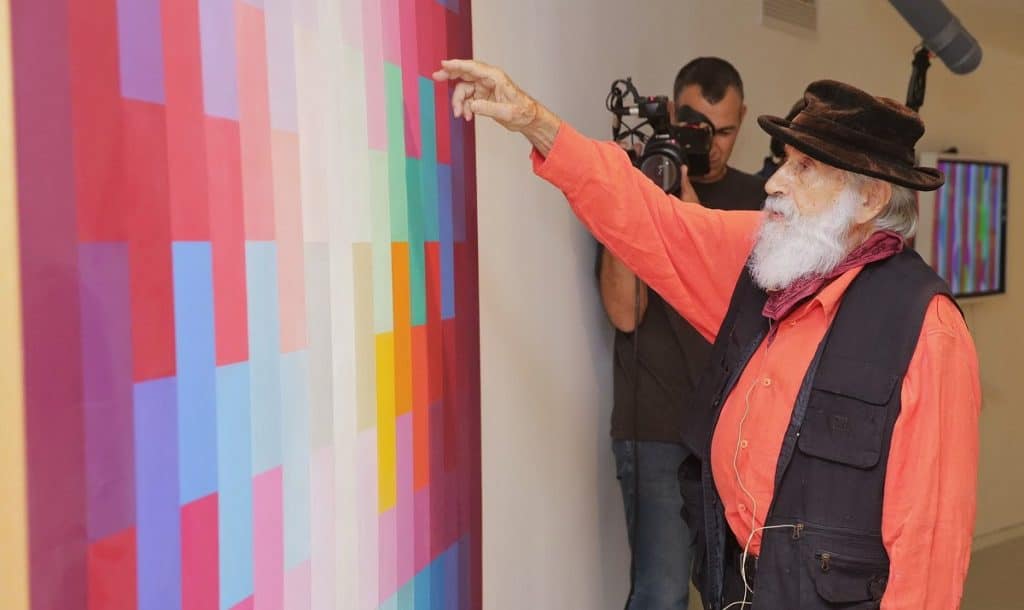 When a museum features a painting or a sculpture by an artist, it’s considered a tremendous honor. However, few artists in history know what it’s like to have an entire museum dedicated solely to their works.

Yaacov Agam is one of those artists.

Thanks to the support of many contributors, the city of Rishon LeZion, and Park West Gallery, 2017 witnessed the opening of The Yaacov Agam Museum of Art (YAMA) in Israel—the artist’s beloved homeland.

The museum has been in the planning and construction stages for over a decade, but it finally opened its doors on October 26. The fact that the museum is a publicly-funded institution—supplemented by generous donations from the Park West Foundation and dozens of contributors—shows how passionately Israel regards Agam as its greatest living artist. 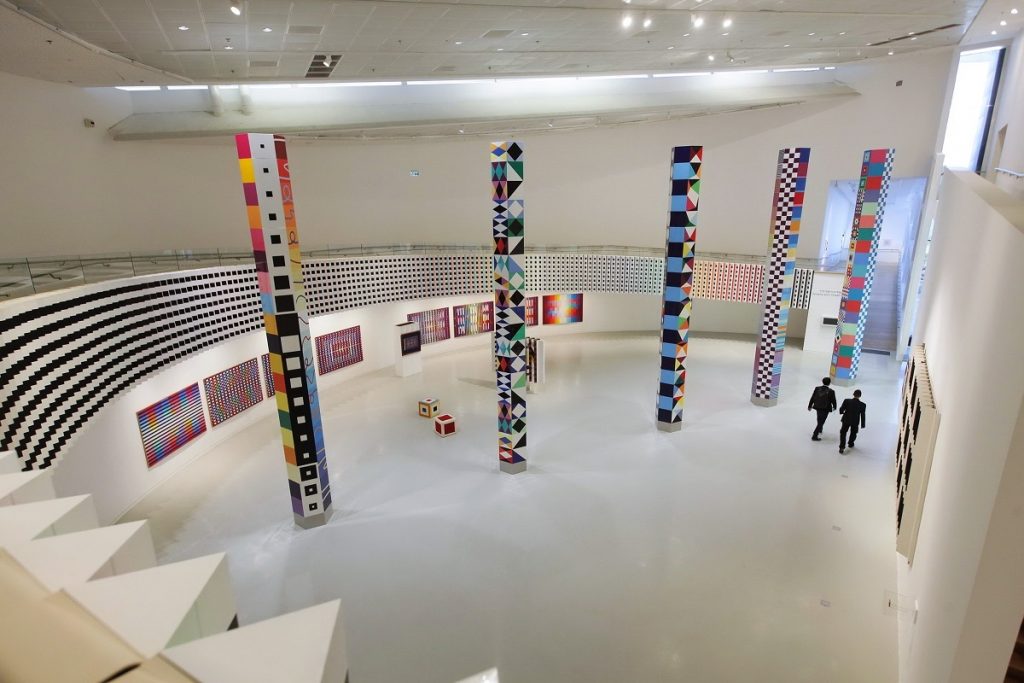 The interior of the Yaacov Agam Museum of Art (YAMA)

“I can’t think of an artist who deserves this kind of recognition more than Agam,” said Albert Scaglione, Founder and CEO of Park West Gallery. “He has been so influential to generations of Israeli artists and his work needs to be experienced in person. This museum is the perfect showcase for his genius.” 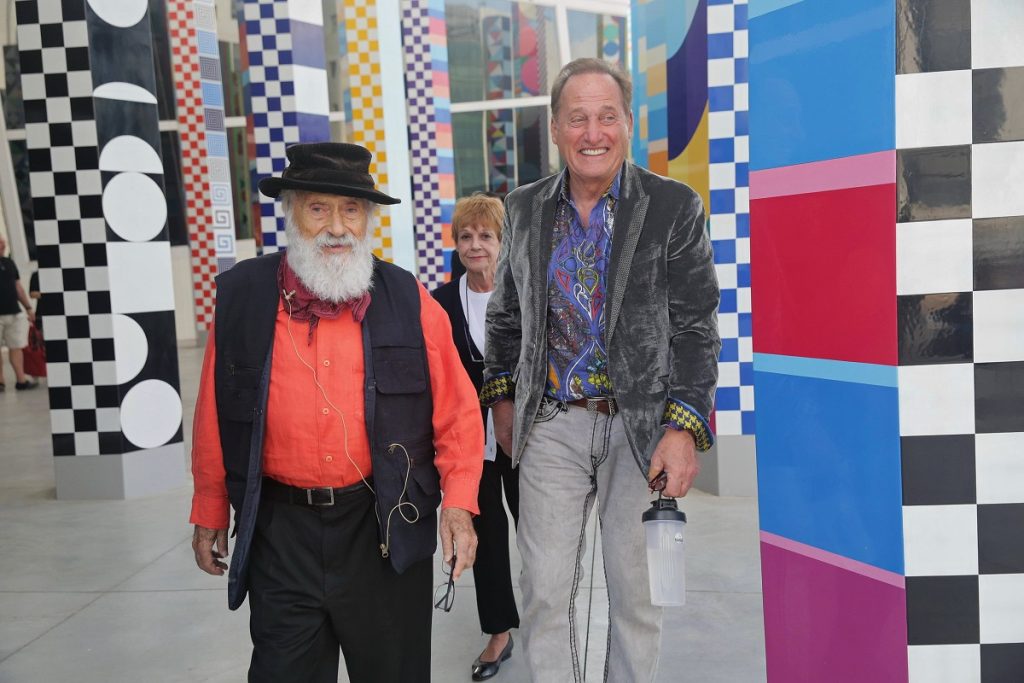 Agam has had a relationship with Park West Gallery for decades, so it was no surprise that Park West planned a special reception for their VIP clients to celebrate the opening of YAMA—the museum’s first event of its kind.

On November 6, the Celebrity Constellation docked in Israel’s Port of Ashdod, south of Tel Aviv, having set sail from Athens, Greece.

When more than 100 of Park West’s VIP clients disembarked, they were met by Albert and Mitsie Scaglione and other members of the Park West Gallery team.

Together, the Park West party traveled to the Yaacov Agam Museum of Art (YAMA) in Rishon LeZion, where Agam himself met the group on the steps of the institution. 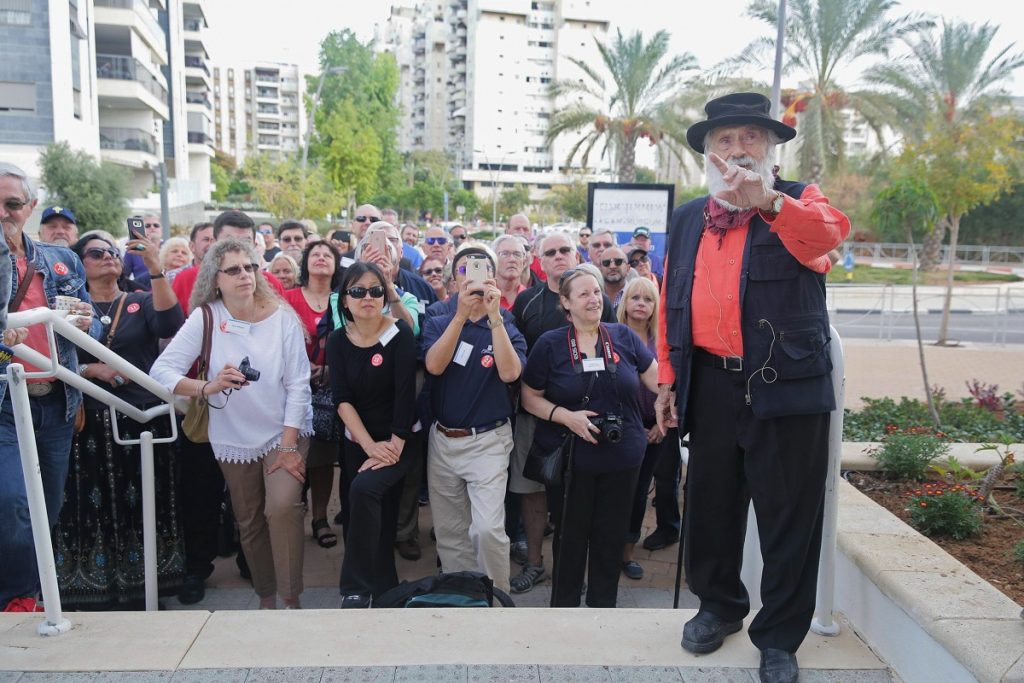 He greeted them warmly, encouraging them to notice the contrast of colors on the pillars leading into the museum. The bold designs on the pillars transform the museum itself into one of Agam’s works of kinetic art.

Inside the museum, the group was treated to a personal tour by the artist, who walked them from work to work, giving them insights into each of his creations.

The impressive institution features some of Agam’s most famous works as well as an area displaying what Agam calls his “tactile interactive artwork.”

This innovative installation allows visitors to use digital screens to create and project their own “Agam art” in real-time. With over 100,000 variations available, there is a one in 6 million chance that a patron will create the exact same work of art as a previous guest. 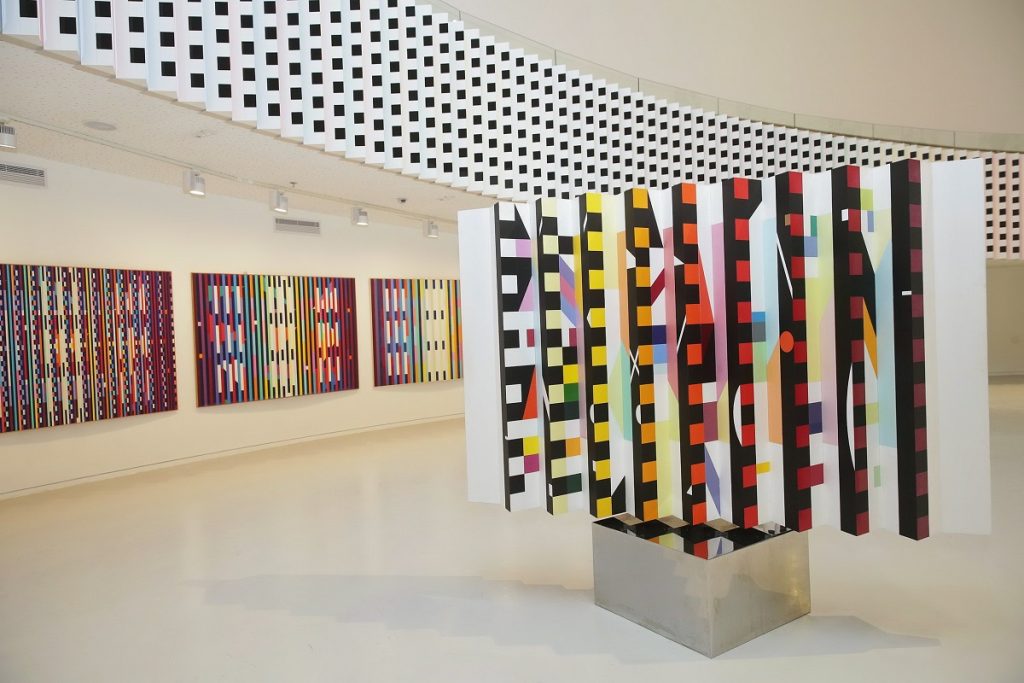 The interior of the Yaacov Agam Museum of Art (YAMA)

Following the tour, the group retired to the museum’s interactive video theater, and then Agam gave a passionate lecture on the history of art.

As Agam led his rapt audience from cave paintings to contemporary times, he was accompanied by music from his long-time companion, classical harpist Chantal Thomas d’Hoste.

When Agam finished his history lesson, it was time for Albert Scaglione to take the stage.

Scaglione, a noted vocalist, performed three of his favorite musical numbers—“Love Me Tender,” “Strangers in the Night,” and “Singing in the Rain”—while Agam projected his interactive art on the theater’s screens. 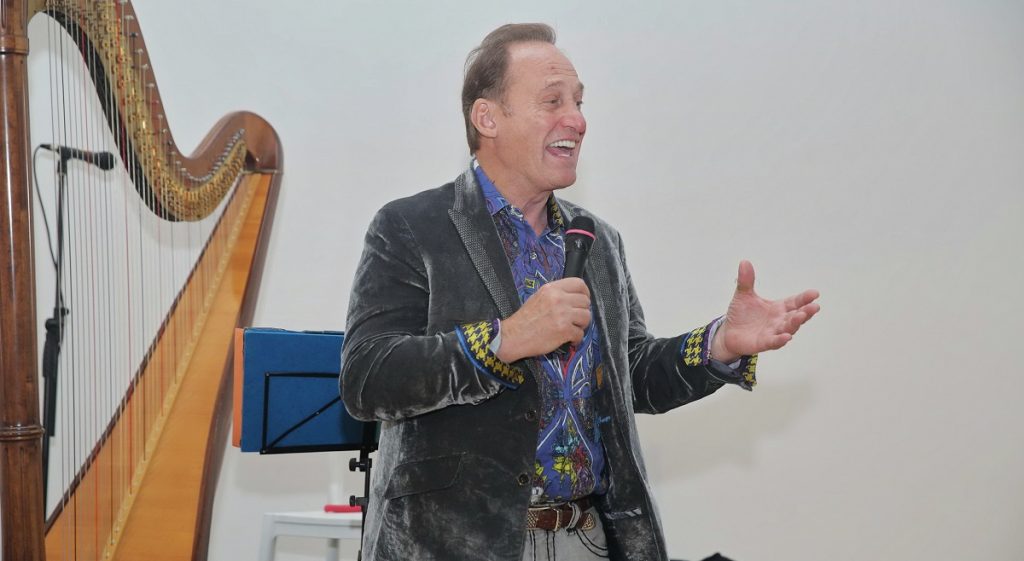 When the performance ended, the Park West group enjoyed a catered lunch on the museum’s outside patio, where they were joined by Gilad Melzer, curator of the museum, and Dr. Mark Fromer, the chairman of the Friends of YAMA, who flew in from New York for the event.

Also in attendance were Duaiv, the internationally acclaimed artist, and his wife, Magella, both long-time friends of Agam and Scaglione. 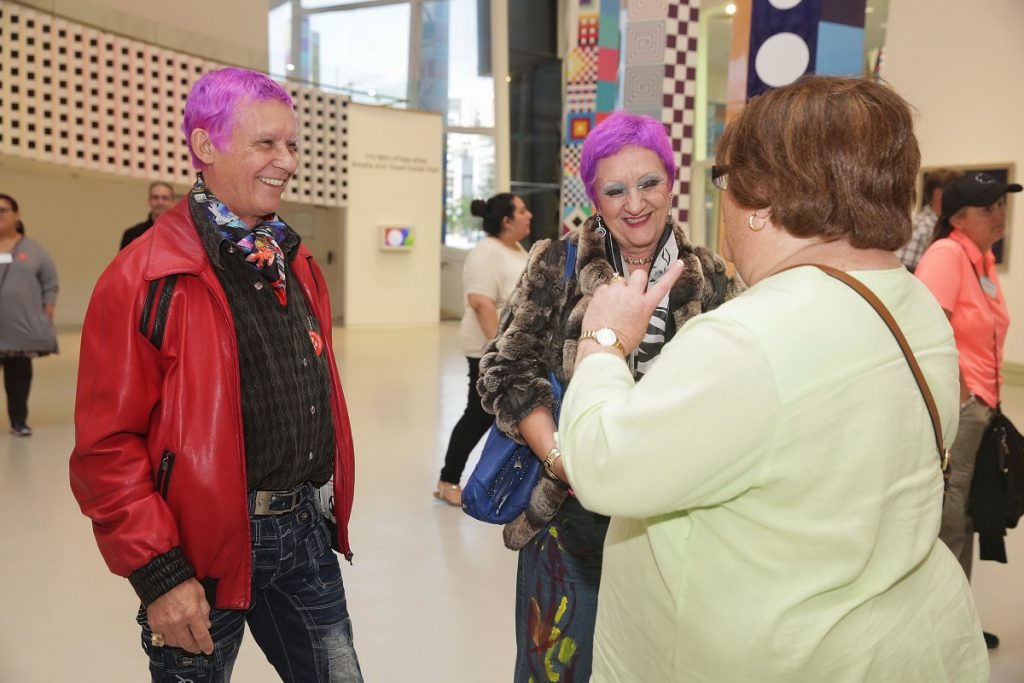 When their time at the Yaacov Agam Museum of Art came to an end, the VIP group left Agam to take a private tour of the Old City of Jaffa, one of the most historic districts of Tel Aviv.

After that, the Park West delegation returned to the Celebrity Constellation, where, the following night, the onboard art gallery hosted an exclusive auction of Agam works.

“It was a wonderful day,” said Scaglione. “It was so gratifying to be able to share the opening of his museum with Agam and show our clients what Agam is like when he is truly in his element. People will be traveling from all over the world to visit YAMA and they won’t be disappointed.” 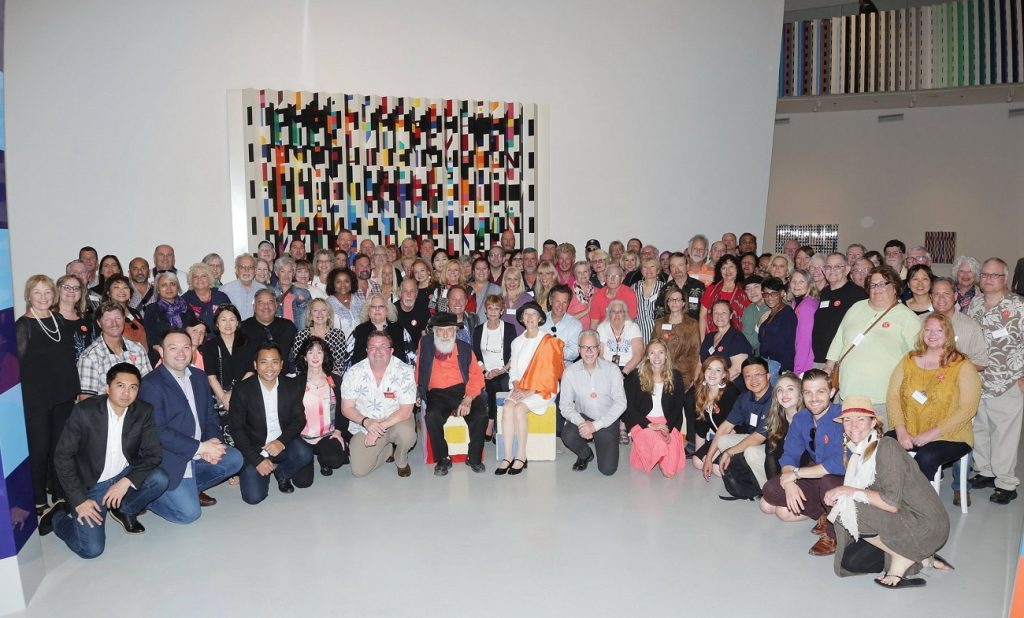 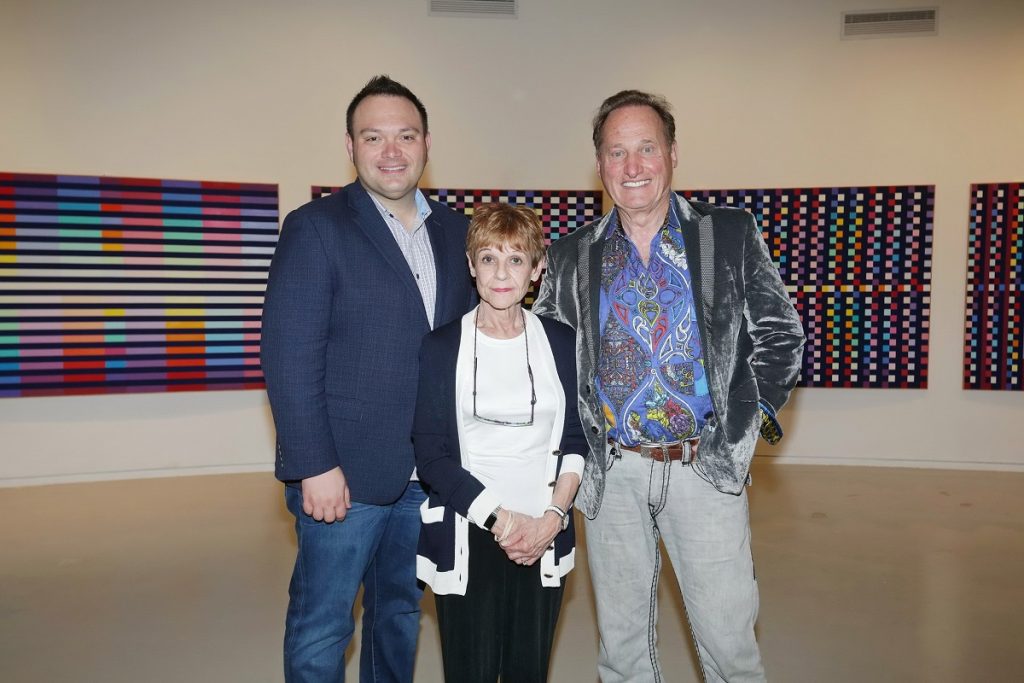 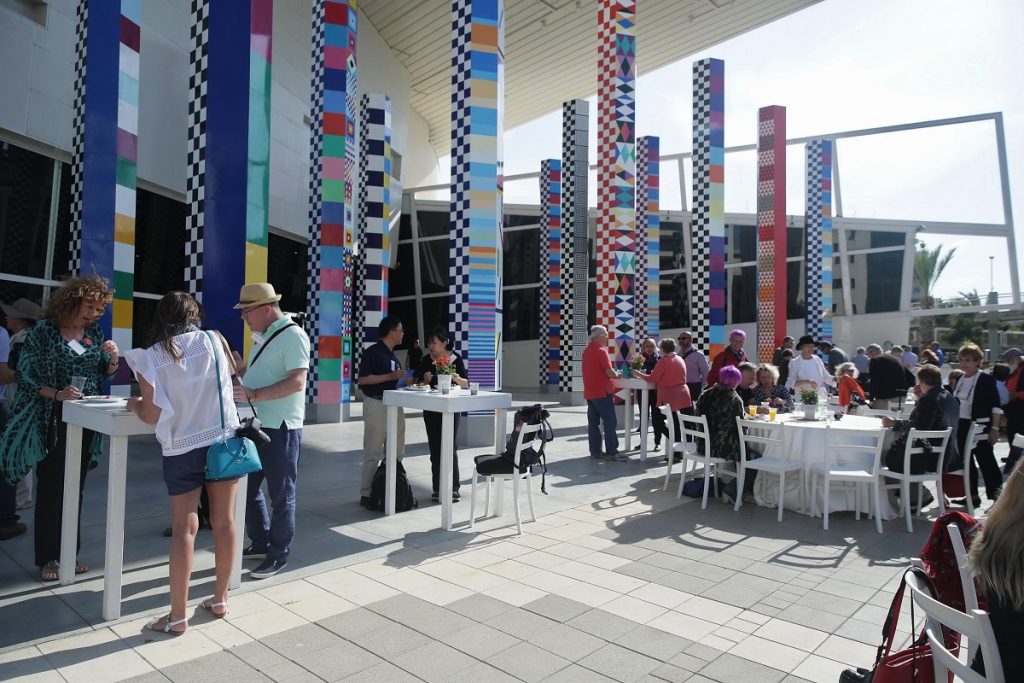 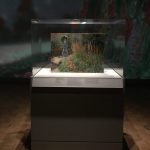 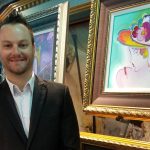