Park West sets sail with Anthem of the Seas

The Anthem of the Seas has been christened for its maiden voyage on April 22. Photo courtesy of Royal Caribbean International.

The Anthem of the Seas, Royal Caribbean International’s newest ship, has been officially christened just in time for its maiden voyage on April 22.

The ceremony took place on April 20 in Southampton, U.K., where it will sail its inaugural season before repositioning to its homeport in New York this November.

The 4,905-passenger Anthem of the Seas is the sister vessel to the Quantum of the Seas. As its sibling, the Quantum-class ship shares many of the same innovative features. These include the North Star aerial observatory, which gives guests the chance to be 300 feet above the ocean for great views, as well as “virtual balconies” that project real-time views of the ocean in select rooms.

Attractions on the ship mirror the Quantum, like the RipCord iFLY skydiving simulator, the Two70 lounge with its multimedia entertainment, robotic bartenders in the Bionic Bar, bumper cars and a choice of 18 restaurants.

Passengers can also enjoy Park West Gallery’s onboard art auctions at sea, where guests can learn about and collect art from one of the largest collections in the world. Nenad Stojanovic is the current principal auctioneer aboard the Anthem of the Seas. He says his art team will be more than ready to intrigue guests with art education and auctions.

“My team and I are very excited to be a part of this remarkable ‘smart ship,’” he says. “We are currently busy with all the background work to prepare a first-class production of the art program that will match the magnitude of the ship.” The Park West art gallery aboard the Anthem of the Seas. Photo courtesy of Nenad Stojanovic.

Along with unique features and attractions, the Anthem has a special godmother. A cruise ship’s godmother is traditionally a celebrity or a royal who has the honor of naming and blessing the ship. In the case of Anthem of the Seas, however, Royal Caribbean selected travel agent Emma Wilby, 27, of Sunderland, U.K. as the Anthem’s godmother.

Wilby christened the ship and performed a song for more than 1,300 guests and dignitaries. Wilby is a military wife who performs in the Military Wives Choir in Kinloss, Scotland. She joins the ranks of other Royal Caribbean ship godmothers such as Gloria Estefan, Whoopi Goldberg and Steffi Graf.

Passengers will certainly have no trouble identifying the Anthem when it docks. The new ship is 1,141 feet long (longer than five Boeing 747 jetliners), weighs 168,666 gross tons and has 18 decks with 2,090 staterooms. 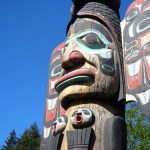 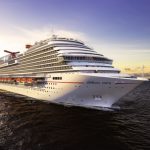