Morris Shapiro sits in front of Le Marriage by Marc Chagall, a wedding gift Shapiro and his wife, MaryAnn, gave to each other. “The couple stands under the chuppah and surrounding them is a visual feast of celebration — dancers, musicians, friends, family and children,” says Shapiro. “His drawing talent was one of Chagall’s greatest gifts, and this work, absent of color, focuses the viewer on his extraordinary draftsmanship.”

A large work by Marc Chagall hangs in the front hall of Morris and MaryAnn Shapiro’s Novi home.

“It’s definitely one of my favorites,” the 56-year-old Park West Gallery director says of Le Mariage, a 1976 aquatint framed in black that depicts a traditional Jewish wedding. “We bought it for each other as a wedding gift.”

A tour of the Shapiros’ contemporary home reveals more than 100 other works, all with personal meaning. Hanging over the living-room sofa is a large contemporary piece by Miro; and nearby, the small gold-framed Portrait of Jan Lutman the Goldsmith is by Rembrandt. In the family room, a large piece by Detroit artist Marcus Glenn hangs over the fireplace. Other walls hold a Matisse-like drawing, works by 1998 World Cup artist Linda LeKinff and mysterious and otherworldly images by New York artist Robert Kipniss. Many share Shapiro’s Jewish heritage.

“I don’t have a traditional art collection, per se,” he explains. “I’m immersed in art. My collection is eclectic and based on personal experiences and relationships with artists. Each means something special to me.”

Working with Southfield’s 63,000-square-foot Park West Gallery has enabled Shapiro to meet many of the artists whose work now hangs in the home he shares with MaryAnn and 14-year-old daughter Amanda. Three other children – Mia, Myles and Mason – are grown. A family portrait by artist Peter Max hangs over the living room’s grand piano, and a tour of his collection is sprinkled with stories and reminiscences of artists he has been fortunate enough to meet and work with.

Contemporary artist Igor Medvedev, whose quietly elegant Late Fishing hangs above a cherry-wood Ello sideboard in the dining room of Morris and MaryAnn Shapiro’s Novi home, says that his work is about capturing “visual miracles.”

Working directly with artists is one of the best parts of the job, he says, and a dream since he was a child. Shapiro grew up in Chicago in the 1950s and ’60s. His mother, he says, decorated the house with gaudy French Provincial furniture and accessories. “It was really hideous,” he remembers. “There was no art on the walls, so I made my own. I drew and painted in part to rebel against my parents.”

Thumbing through a book on the Holy Land one day in his parents’ library, he came across a woodcut of Adam and Eve by Albrecht Durer. “I was mesmerized by the contours and lines and Durer’s use of space,” he says. “From that moment on, I was smitten.

“He eventually followed Durer into drawing, going on to study at the Minneapolis College of Art and Design. While there, he shifted his emphasis from studio art to art history and art criticism, later working at the Minneapolis Institute of Arts before returning to the Windy City to pursue another passion – music.

After playing the drums professionally for a time, Shapiro took a position as gallery director for Chicago’s Merrill Chase Galleries, where he worked from 1977-1983. In 1983, he came to Detroit to head Park West’s retail gallery, where he’s been ever since.

After 25 years, he’s still passionate about the company’s philosophy of bringing art to the public.

“In many ways, art has been taken away from the people and made less accessible,” he says. “It’s gratifying to be able to swing the pendulum back and to allow people to experience art firsthand.”

While Shapiro is serious about his art, not all of his art is serious. Another favorite piece in his collection is a drawing by animator Chuck Jones, dedicated to daughter Amanda. “It was really neat to meet him,” Shapiro says.

While eclectic, Shapiro says his collection reflects his interests and his life. He’s passionate about reading, writing and music and loves to travel. He participates in jazz jam sessions whenever possible and is currently collaborating with Amanda, a burgeoning singer-songwriter, on her first demo recording. He enjoys spending time with his first grandchild, Matthew.

A member of Temple Shir Shalom in West Bloomfield, Shapiro also is passionate about his family and his faith. He believes it “is about being appreciative of the blessings I have in life, the sanctity of family, the observance of and passing on of tradition,” he says. “My religion also provides for me a perspective of how short life is, how miniscule and insignificant we are, how God’s creations are miraculous and infinite and how fortunate [we are] for every day we are given. Each day is a gift of inestimable value.”

He believes others interested in collecting art should follow the same philosophy, allowing art to enhance their life, not just their wallets.

“Knowing what you like is the entrance into the art world,” he says. “People should buy art because they love it. It should be collected for its emotional and spiritual benefits, not its financial benefits. It’s really the only way to go.” 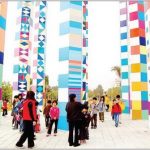