In Part 1 of Park West Gallery Director Morris Shapiro’s interview with renowned artist Leslie Lew, the artist discussed her artwork and thriving career. Following is Part 2 of this fascinating interview in which she discusses her history as an artist…

Morris Shapiro: I know you have a really amazing resume and you have shown in some of the finest galleries in New York. And, you’ve shown next to artists like Andy Warhol, Lichtenstein, and Keith Haring.

Leslie Lew: I knew Andy and I knew Keith.

MS: And you’ve shown side-by-side with them, as well as in some of the most prestigious galleries in New York and elsewhere. The choice to come to Park West is an interesting because I think it says something about your philosophy of art.

LL: As an art student early on, I would visit museums and high-end galleries, but I always had a little bit of a problem with the way they present their art, or even the approach that they take. Often they are very elitist; it’s almost like you are intimidated when you go in a place… you can’t touch anything. And I’ve always felt that art was supposed to be something that would reach everybody, not just a few people.

I think that’s why I am really, really thrilled with Park West. Your approach is to educate, to deliver, to present and have fun with the art, and to include, not exclude, people. I’m noticing as I go through these events and exhibitions with Park West that it’s a different approach, and it’s exactly what I want to do with my work.

My long term plan is to try to reach as many people as I possibly can. And I think a great way to do this is working with Park West. Yeah, my pieces get into museums…at the Guggenheim or some other high-end gallery, and that’s great. But the people that I’m meeting with Park West are from all over the place, all over the world basically.

MS: And with different levels of artistic sophistication.

LL: Exactly. And you know what, art isn’t just for the few. Take Rembrandt…he wanted to make art approachable. They didn’t have TV…art was part of their communication. And I feel that is really important.

MS: Well I think you are a perfect fit for that because you have such a wonderful energy yourself and so much enthusiasm about your work. That’s such a great combination…people just adore you and your work. So many artists have difficulty in really communicating about their work and sharing their personal side because it is just the way they are, but you have such a wonderful, outgoing personality and people are just delighted to meet you.

Let’s talk a little bit about your past, your background. I know that you come from a family of girls. You have four sisters?

LL: Yes, I am the oldest…I have three younger sisters.

MS: And your father was a pretty famous advertising executive, and his name was Leslie also.

LL: That’s right…I’m Leslie Jr., as I always tell everybody. My parents are a little unconventional…they were kind of like old beatniks; they had a spirit about both of them. My mother used to wear a chignon, big earrings, and funky shoes. I used to be embarrassed when I was a kid…I wanted her to look more like the Dick, Jane and Sally mom, you know with the flip haircut, but she didn’t. She had leotards, she was very dramatic. I probably got a little of that from my mom.

And my dad, of course, was an artist in his own right. But when he got married he needed to take the route of supporting his family; that is why he went into advertising. He drove to New York and got a job at J. Walter Thompson. He’s responsible for all of the coolest ads that we grew up with as Baby Boomers.

MS: Can you tell us some of them?

“Oh I can’t believe I ate the whole thing,” “marshmallow meatball,” you know, that kind of thing. There was one with a newlywed who was cooking for her husband and she was a really bad cook… Dad did that one.

And the Marlboro Man. Dad went down to Kentucky. You know that guy just died recently from smoking. He was a really young guy though; he was only about eighteen at the time, even though he looked a lot older.

MS: And some of the famous breakfast cereals?

LL: Oh yeah. When dad passed away a couple of years ago, I decided to do a dedication to him. I recreated one of the Sugar Smacks boxes that he invented. He did the Smackin’ Brothers, which would be so totally inappropriate today…so “politically incorrect.” But what I did was paint a really big—about 90 by 60 inch—sculpted oil, based on Dad’s ad, and I had an exhibition called “Snap, Crackle, and POP” and I did a big POP. He has influenced me a lot.

In the old day with the ad layouts, they used those great Pantone markers. He had thousands of colors…and it was almost like a watercolor process. He had his own little studio in our house and I used to sit underneath his drawing table. He was really persnickety about his markers, and if they were the least bit worn or dry, he would give them to me. So I would sit there and actually copy my dad’s ads. I still have some of them.

MS:  So you were also drawing at a really early age?

MS: So then your father kind of packed it in; he kind of just turned his back on the advertising world and took your family to Oregon right? And you guys were living kind of as “bohemians” in Oregon?

LL: Yeah. What happened was that my parents got divorced, but we all ended up following my dad. My dad didn’t want to get divorced, but my mother, I guess she just couldn’t handle it. It was a time in the 50’s where she wanted to be more creative. She needed to “do her own thing.” She didn’t want to be a housewife. Ultimately, she ended up working as a writer for the Chicago Tribune and then later for the Oregonian. Even thought they got divorced, they remained friends. Dad went to Oregon, and I went to Oregon with him. Then my sisters followed. Then, my dad invited my mom to come, so everyone ended up in Portland.

MS: And this is about the time when you decided to become an artist, right? You moved to Chicago and went to The Chicago Institute, the School of Art Institute, which everyone knows is one of the greatest art schools in the world. Some of the work that you do today still has images that originated from your Chicago Institute days, right?

LL: Yes, the first piece that ever was in a museum is one of the etchings that I released through Park West. I had never sent them out…they’ve always been just with me in my studio. But, I love that you guys have great, beautiful etchings like Rembrandt, Goya, and I thought, you know what, I’m going to release these…this is the right place for them now.

Stay tuned to the Park West Gallery blog for Part 3 of this absorbing interview with Leslie Lew, and review Part 1 here! 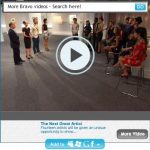 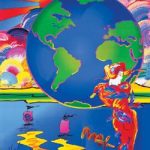