Park West artists Marcus Glenn and Tim Yanke are making music with their art by donating original works that will be auctioned to benefit the annual Les DeMerle Amelia Island Jazz Festival in Florida.

This weekend’s Big Band Bash gala fundraiser, Saturday, April 19, is key to the success of the annual festival, which is slated for Oct. 16-19. The 2013 festival featured more than 100 jazz artists and 60 student musicians. Since its inception in 2001, the event has been a great cultural boon for the community and its visitors.

Since jazz is a uniquely American style of music, it’s fitting these two artists are pitching in to raise funds for the festival. Marcus’ art has long been steeped with the soul of jazz music, while Tim’s reveals the heart of the country through his Western-influenced imagery. Park West’s gallery director Morris Shapiro will be the auctioneer at the Big Band Bash. (Interesting in getting in on Saturday’s bidding? See below.)

Marcus created the official poster artwork, “Festival Jazz,” for the three-day fall event. The original painting will be auctioned at Saturday’s fundraising gala.

The playful painting in Marcus’ unique “flat-life” style features a jazz quartet with Les DeMerle on drums and a self-portrait of Marcus playing the saxophone. This is the second time in 2014 that Marcus’ artwork has been the official art for a music-related event. He was also the official artist for the 56th Annual Grammy Awards in January. (The hand-signed original to be auctioned is a mixed media painting. The artwork measures 32×40 and was created by the artist for the the Amelia Island Jazz Festival.) Tim Yanke quite literally included music as the foundation of the two pieces he’s donating for the fundraising auction. The Michigan-based artist who is well known for seeing a “canvas” on nontraditional surfaces has created two original pieces with paint on Zildjian cymbals. One features Tim’s iconic dragonfly imagery and is titled “Dragonfly 22 Zildjian.” The other, called “Four Directions 22 Zildjian,” features feathers with textiles hand-tied through holes Tim drilled in the cymbal. (Each work is a mixed-media painting on a Zildjian cymbal, hand-signed by the artist. Each cymbal measures 22×22 and is a unique work created for the 2014 Amelia Island Jazz Festival.)

If you’re interested in getting in on Saturday’s Big Band Bash fundraiser bidding in support of Les DeMerle’s Amelia Island Jazz Festival, please contact the gallery by phone at (800)-521-9654, ext. 4 or by email at sales@parkwestgallery.com and follow us on Twitter @ParkWestGallery 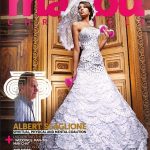 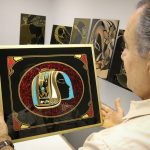