Marine life artist and scientist Guy Harvey is making a splash at SeaWorld Orlando this weekend to educate guests about the world of sharks.

On November 19 and 20, Harvey is joining SeaWorld Orlando to host a number of special events at its park. Tickets to the events are required in addition to park admission.

The first event is the Sharks Up Close Tour. Harvey will take visitors on a tour of the park’s “Shark Encounter” attraction, a 700,000-gallon habitat that houses a variety of sharks. Join Harvey as he speaks about the world of sharks and the perils they face.

The second event is a dinner at Sharks Underwater Grill. Join Harvey for a three-course meal at the unique oceanic restaurant, which offers a window into the mysterious world of sharks. Harvey will share stories of his artwork, his adventures and the beauty in the world around us.

Harvey will make appearances throughout the weekend to host chats, meet-and-greets and signings inside the Guy Harvey Shop.

This isn’t the first time SeaWorld Orlando has called upon Harvey for his knowledge and artistic talents. On May 26, Harvey completed a shark-themed mural located near the park’s new Mako roller coaster.  Fittingly, the mural depicts a Mako shark, the world’s fastest shark, slicing through the water. The image is an enlarged version of one of Harvey’s works of art. The mural is part of a five-year collaboration between Harvey and SeaWorld. SeaWorld is promoting Harvey’s shark conservation efforts, and Harvey’s nautical merchandise is available at the park.

Harvey is regarded as one of the world’s preeminent marine wildlife artists. He uses his education in marine biology and fisheries management as well as his diving experiences to portray vivid undersea environments and wildlife. He also founded the Guy Harvey Ocean Foundation, which works to promote education, research and conservation of ocean environments.

Visit www.seaworldparks.com for more information and to purchase tickets, and be sure to view the Guy Harvey artwork available from Park West Gallery. 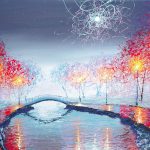 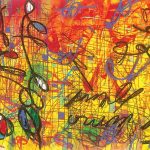