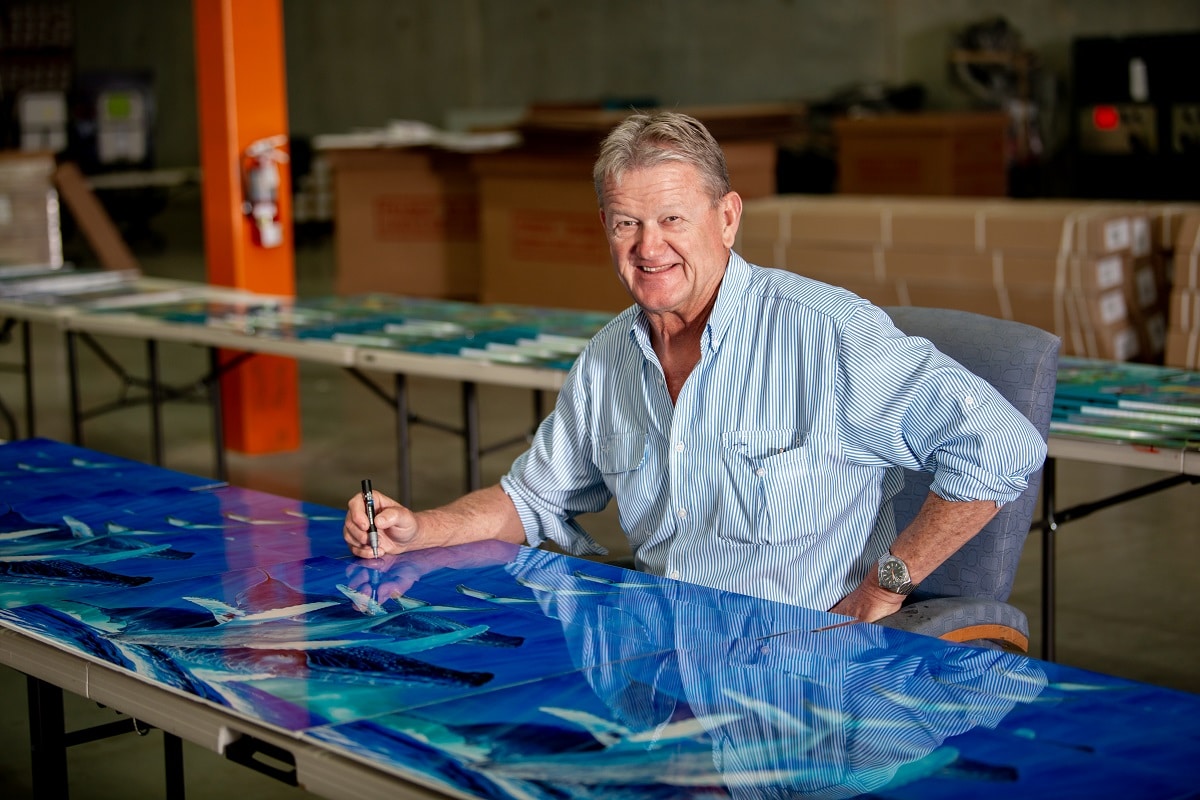 People around the world know the name “Guy Harvey.”

While he first became famous for his paintings of ocean life and game fish, Harvey has since transformed his acclaimed art into a hugely popular international brand, now encompassing clothing, merchandise, magazines, resorts, and even cruise ships.

However, what people might not know about Guy Harvey is how tirelessly he works to protect marine wildlife and advocate for ocean conservation causes. In 1999, he founded the Guy Harvey Research Institute to better “understand, conserve, and effectively manage the world’s marine fishes and their ecosystem.”

And, in 2008, he established the Guy Harvey Ocean Foundation to fund scientific research and host educational programs aimed at conserving the marine environment. Both of these organizations have had an enormously positive impact on the world’s oceans and the amazing animal life that Harvey so beautifully captures in his paintings. 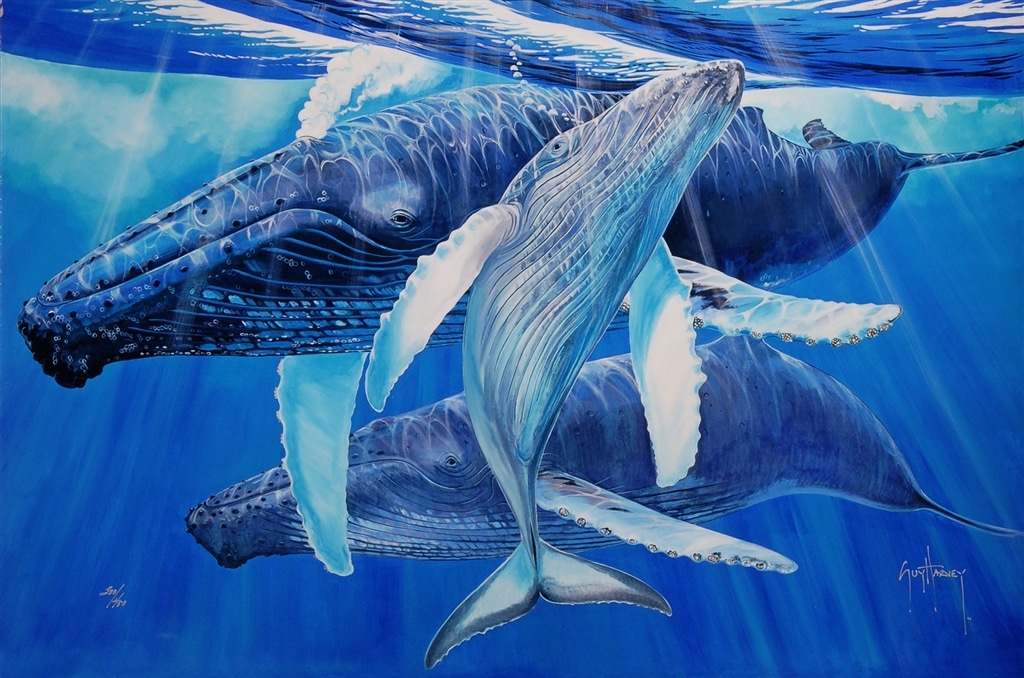 Harvey recently visited Park West Gallery and spoke to us about the important work of the Guy Harvey Ocean Foundation, how everyday people can help with marine conservation, and what animals he’d like to paint next.

The Guy Harvey Ocean Foundation sponsors tagging programs for marine wildlife like billfish, dolphinfish, and sharks all over the world. What are these tagging programs hoping to accomplish?

HARVEY: Tagging is an important initiative for us to be able to analyze data and implement improvements to aquatic creatures. The science is captured first to help retrieve data on animals you are studying to protect. It is important to then educate people on the animal, its history, and why it’s important to conserve, and then implement your findings to positively impact conservation.

Tiger sharks, for example, are what we’ve studied in the Bahamas, Bermuda, Florida, and the Cayman Islands from 2009 to 2014. The main focus for our tagging was to learn their migration patterns. It was interesting from our findings to learn that, during the winter, tiger sharks spend a lot of time around coral reefs in shallow water and, in the summer, they spend their time in the Northwest Atlantic in the open ocean. We have learned that there is no other animal that behaves like this anywhere in the ocean—tiger sharks are just as happy in 10 feet of water as they are in 10,000 feet of water.

To see more of what we have tracked, you can visit ghritracking.org. 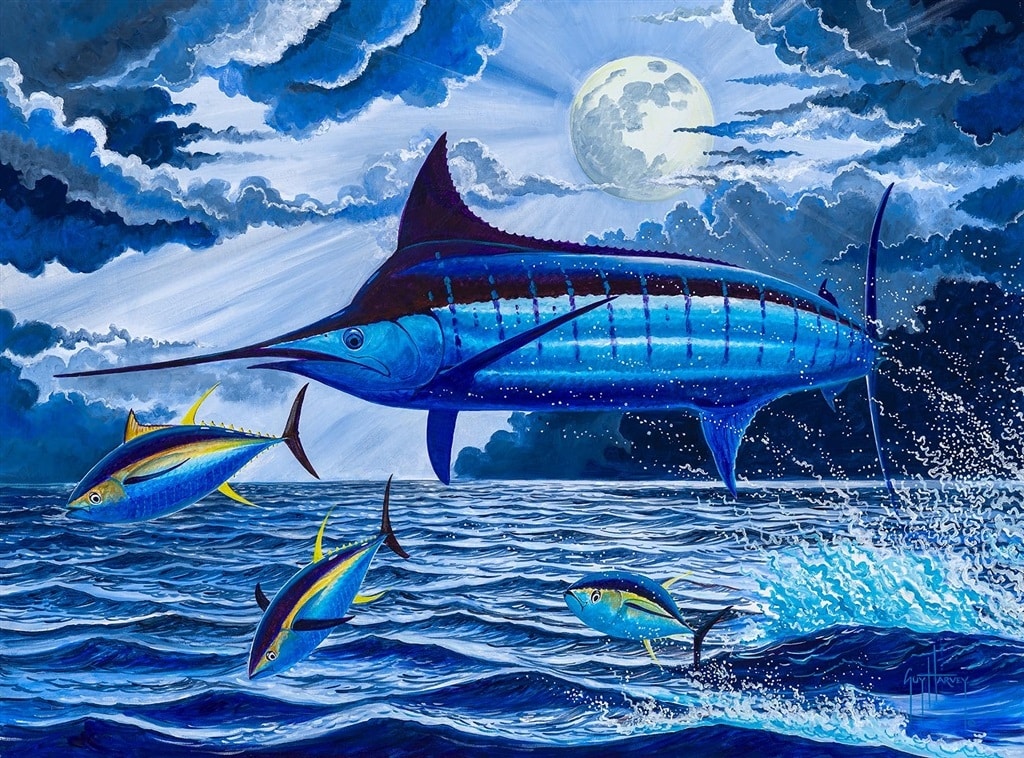 The Guy Harvey Foundation recently celebrated its 10-year anniversary. What do you hope the Foundation will accomplish in the next 10 years?

The Guy Harvey Ocean Foundation did just celebrate 10 years of generating funds to help with the educational side, mostly creating documentaries around conservation. We plan to keep this going over the next decade and beyond, and it is nice to have my children, Alex and Jessica, who share my passion for conservation assisting with the foundation. 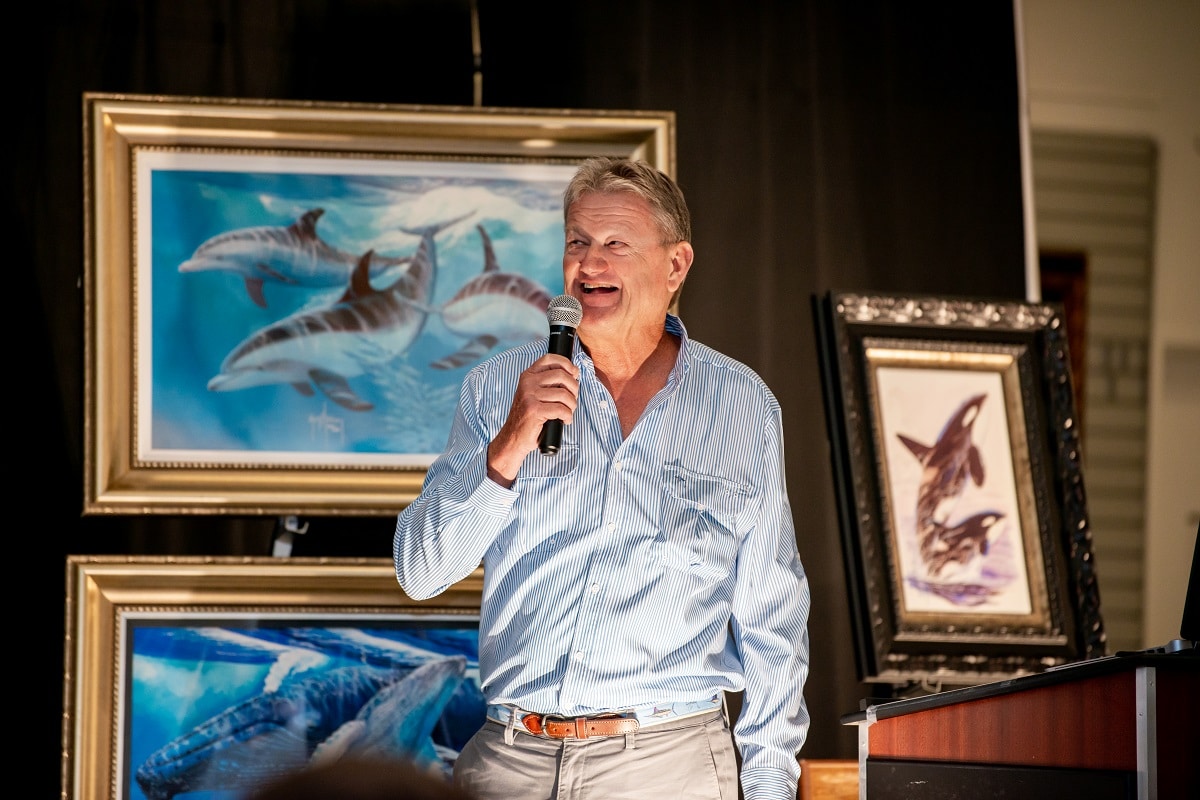 Guy Harvey talks to a crowd of Park West auctioneers.

If an everyday person wants to make a difference for marine conservation, what’s the best way they can start?

Research! Get involved with an organization supporting something you are passionate about. Whether you can donate your time or financial contributions, anything helps!

You’re known for your paintings of billfish and turtles. Are there any animals you haven’t painted yet that you’re interested in trying to capture?

I like to paint from nature and enjoy being immersed in the environment of which I’m painting. The request I receive the most is to paint penguins, but I haven’t been to Antarctica yet, so that is on the list! 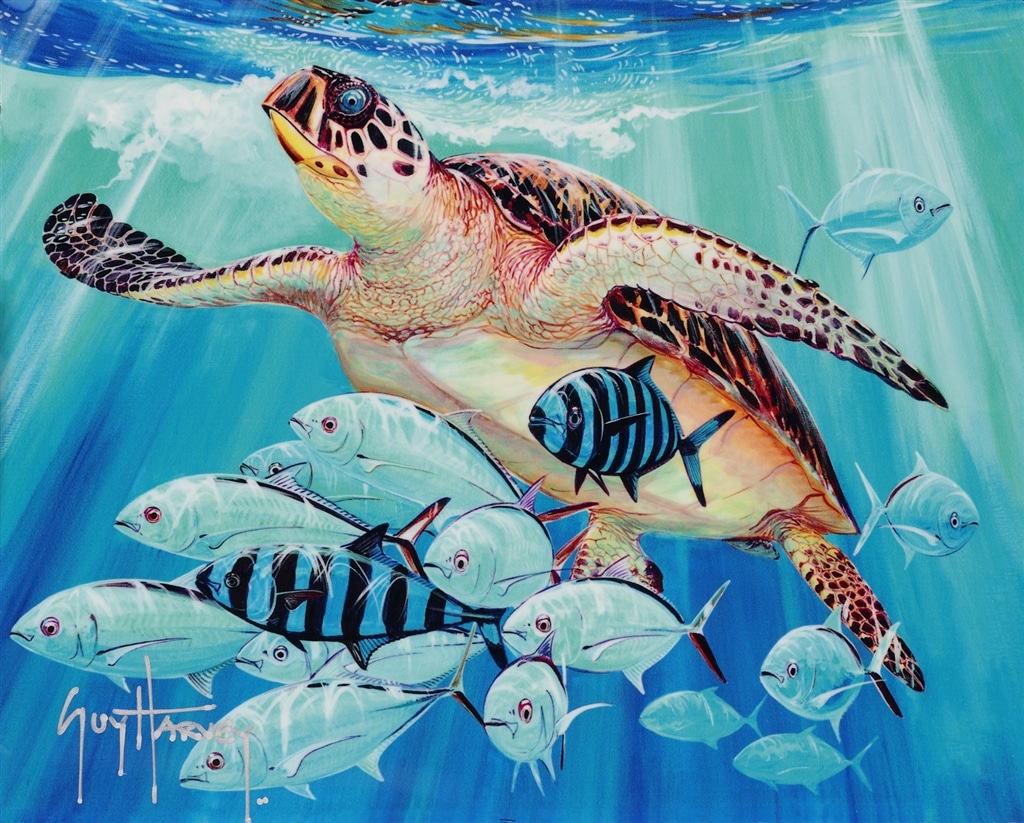 What do you like to do in your free time?

I enjoy playing and watching sports, including diving, table tennis, squash, and team sports. Otherwise, I really like to be at home relaxing in the Cayman Islands.

To collect the art of Guy Harvey, attend one of our exciting online auctions or contact our gallery consultants at (800) 521-9654 ext. 4 or sales@parkwestgallery.com. 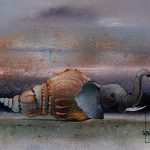 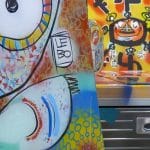