“Behind the Artist” podcast host Morris Shapiro calls Guy Harvey “one of the most fascinating individuals and artists I’ve ever met.”

In an episode of Park West Gallery’s “Behind the Artist” podcast, Shapiro sits down with Harvey to talk about his incredible career. You can find the episode on the Park West Podcast page or download the episode on iTunes or Stitcher.

Shapiro describes Harvey as a “naturalist, author, filmmaker, founder of his own research institute and foundation, licenser, scholar, brilliant draftsman, watercolorist, and painter.”

People around the world know the name “Guy Harvey.” He’s one of today’s most famous living artists—having reached a level of popularity where even people who know nothing about art know and respect the Guy Harvey brand. 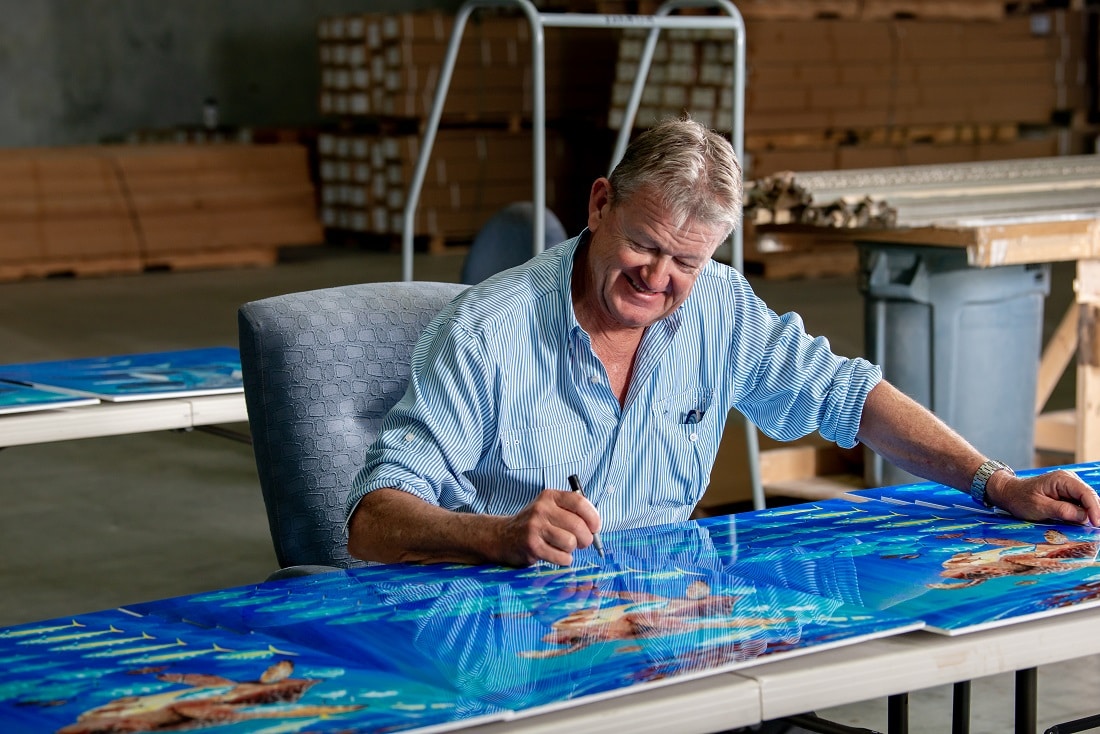 Harvey can be found everywhere today. Millions wear his trademark hats and clothing. His imagery and name appear on everything from coffee mugs to high-end watches. If you’re on vacation, you can stay in Harvey’s Grand Cayman resort, order a cocktail with Guy Harvey rum, and travel the Caribbean on Norwegian Escape, the cruise ship that features Harvey’s dynamic artwork alongside its massive hull.

During the podcast, Shapiro and Harvey discuss the beginnings of Harvey’s art career, his childhood in Jamaica, and his tireless work for marine conservation with the Guy Harvey Ocean Foundation.

Here are just a few excerpts from their enlightening conversation:

Many things resonated. Firstly, the way he fished. In Jamaica, people caught large fish in small boats on hand lines, and the way Hemingway wrote and described the fishing techniques of Santiago matched that exactly, so I could relate right away. The fact he was catching a really large blue marlin intrigued me because, typically in the Caribbean, you don’t see that adult-sized fish there.

So, the massive size of the fish, the length of the battle, but his graphic descriptions of the coloration and the behavior the fish work is as exactly as I had seen. And here I am thinking, “How does this guy write so accurately about this fish? He must have caught a bunch of them.” I had no access to his writing or his photographs or the books that came out about his escapades in Bimini, or Key West, or in Havana at the time… only later I realized just, you know, how thorough his research had been. 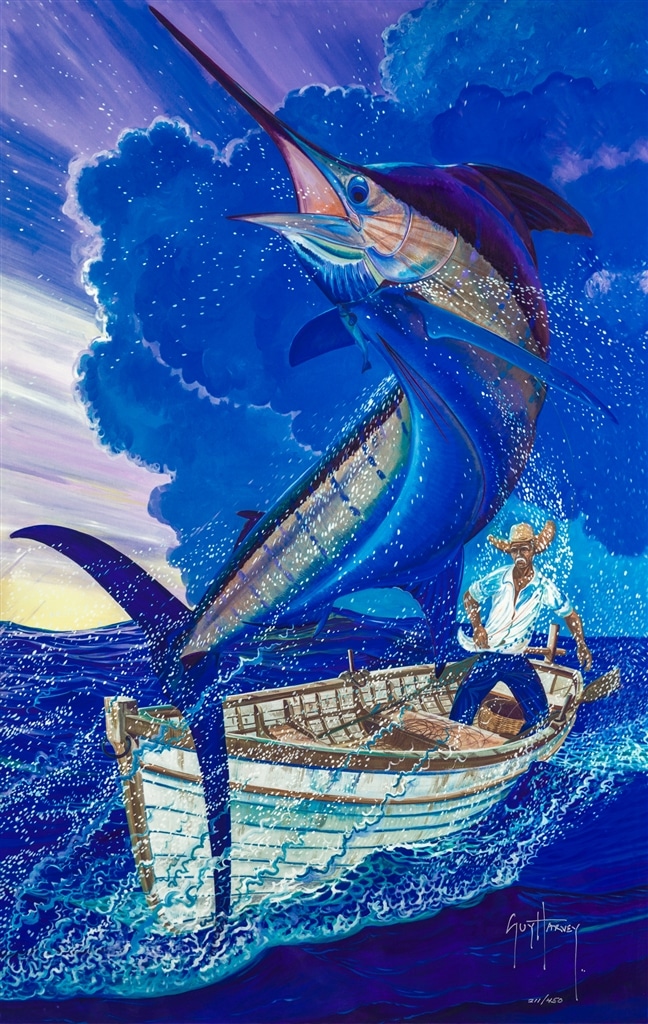 Guy Harvey on his origins as a self-taught artist…

I had a fairly straightforward start, I’d say, with the pen and ink work. I really enjoyed doing it. My mom tried to get me into watercolors, but I found my niche with pen and ink, especially crosshatching, and it worked. I didn’t do anything with it for years until I first started having art shows at fishing tournaments in Jamaica… I’m trying to think of the year 1973, 74 and would sell little bits of art for 10 bucks, 15 bucks, 20 bucks here and there, which converted into Jamaican dollars, this was a good chunk of change. 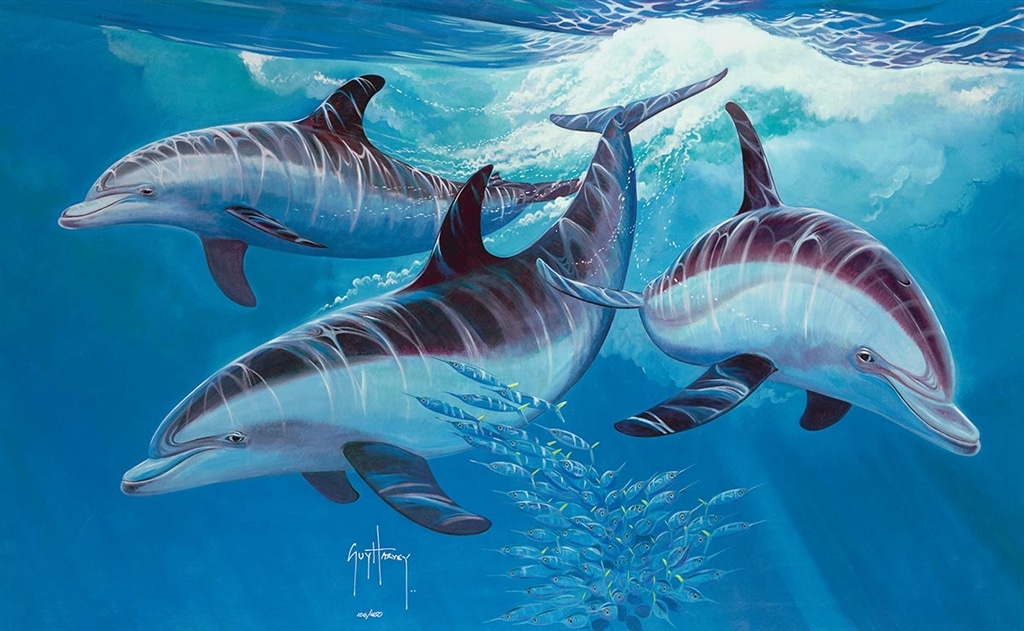 Guy Harvey on the difference between “conservation” and “preservation”…

In terms of conservation, I tell people, I’m not a tree hugger. I catch and eat fish. But, if I’m marlin fishing, and I catch a marlin, I take out the hook, revive him, let him go. If I catch a mahi-mahi or a wahoo or a nice yellowfin tuna, he’s coming in the boat, because I’m taking them home. They’re great to eat, and they’re a resource not under as much stress as say sharks or billfish are, for example. So that’s one thing.

On the other side of it is preservation, which is where you … which is very relevant to … this is where you can mark off an area, call it a marine park, and have a rule that says you cannot take anything out of it. That’s preservation. So there’s no extraction, there’s no use, not even sustainable use. It’s letting it go, keeping a piece of rain-forest, keeping a piece of reef, completely keeping humans away from it, completely. Of course, you’ve got the influence of increased temperature, plastic pollution, any kind of pollution that can invade an area, but as far as human interaction is concerned, the area’s preserved, and they have relevance more and more these days than ever before because of all the pressures that we put on all kinds of resources. So that’s the difference: conservation is sustainable use under rules and regulations. Preservation is no extraction, no use whatsoever.

To collect the art of Guy Harvey, attend one of our exciting online auctions or contact our gallery consultants at (800) 521-9654 ext. 4 or sales@parkwestgallery.com. 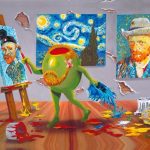 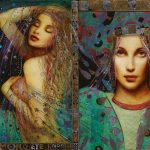