Artist Michael Godard loves creating whimsical artwork featuring his signature olives, but there is more to his paintings than meets the eye.

For every animated olive and cocktail, there is a story or hidden image hiding in plain sight. Some are obvious, but others require a bit of sleuthing to figure out.

Thankfully, the “Rock Star of the Art World” took time out of his hectic schedule to provide curious collectors with insights into the hidden imagery and inspirations behind seven of his popular works. 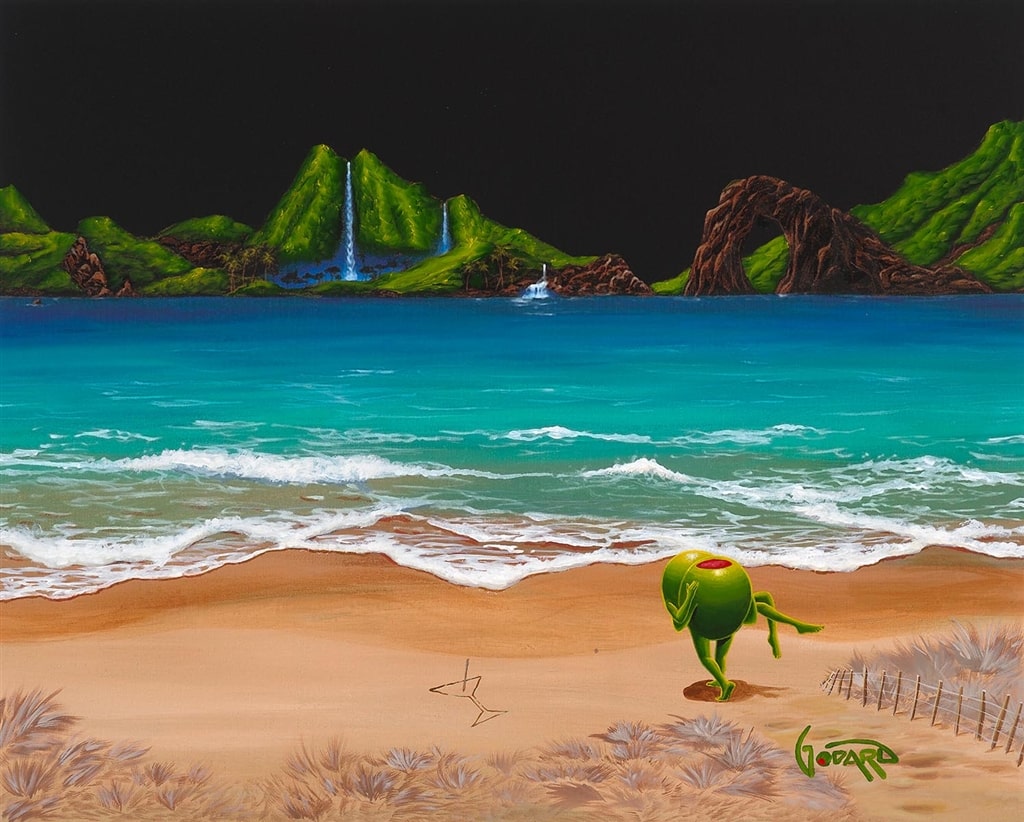 This unique mixed-media painting is an amalgamation of idyllic travel destinations around the world. Godard says everything from the Norwegian fjords and Hawaii to Mexico’s Cabo San Lucas serve as inspiration for this heavenly vacation spot.

“It’s very romantic, it’s just a nice beach where the olives can go and be natural,” Godard says. “You have to look for the little, subtle things. In this particular one, there is a martini drawn in the sand.” 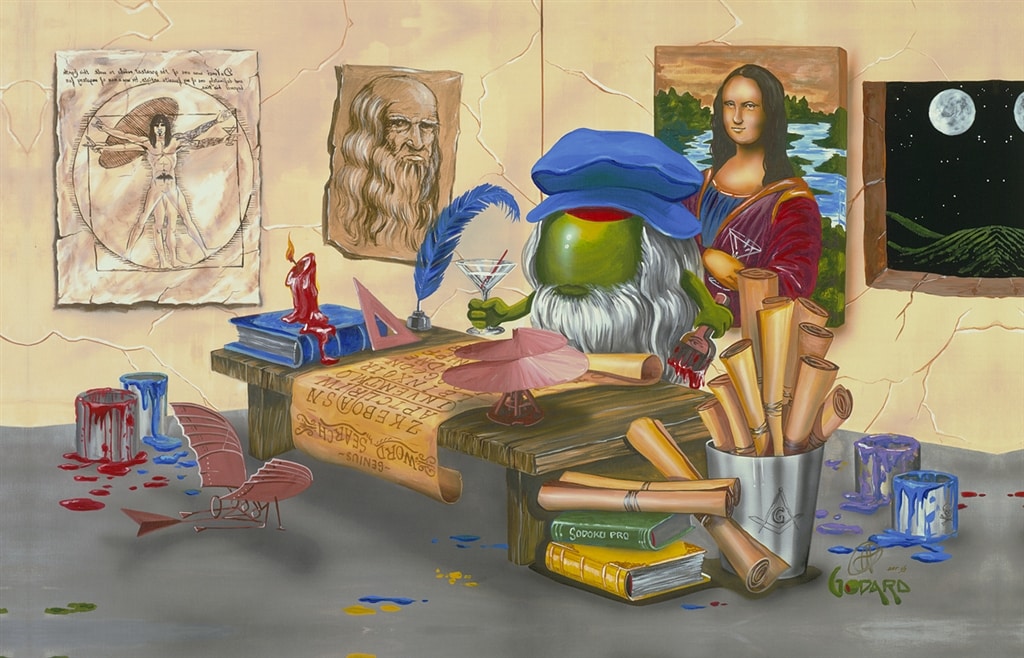 Arguably one of the greatest minds in human history, Da Vinci was an artist, inventor and scientist. Godard is openly fascinated by Da Vinci, making him an easy choice for his masters series with his “Da Vinci’s window” artwork.

Godard’s olive Da Vinci is playing a word puzzle for geniuses, a reference to Godard’s love of puzzles. He even puts his twist on Da Vinci’s famous “Mona Lisa,” revealing the reason behind her mysterious smile is because she is enjoying a martini.

“In my family, you were either clever or a target, so I try to be more on the clever side,” he says. “I enjoy the little things of watching someone as they look at one of my paintings and watch the story evolve.”

Other references include a portrait and models of flying machines. References to the Freemasons and Illuminati hint at the rumors of Da Vinci belonging to both secret societies. “The more you look, the more you will find,” Godard says. 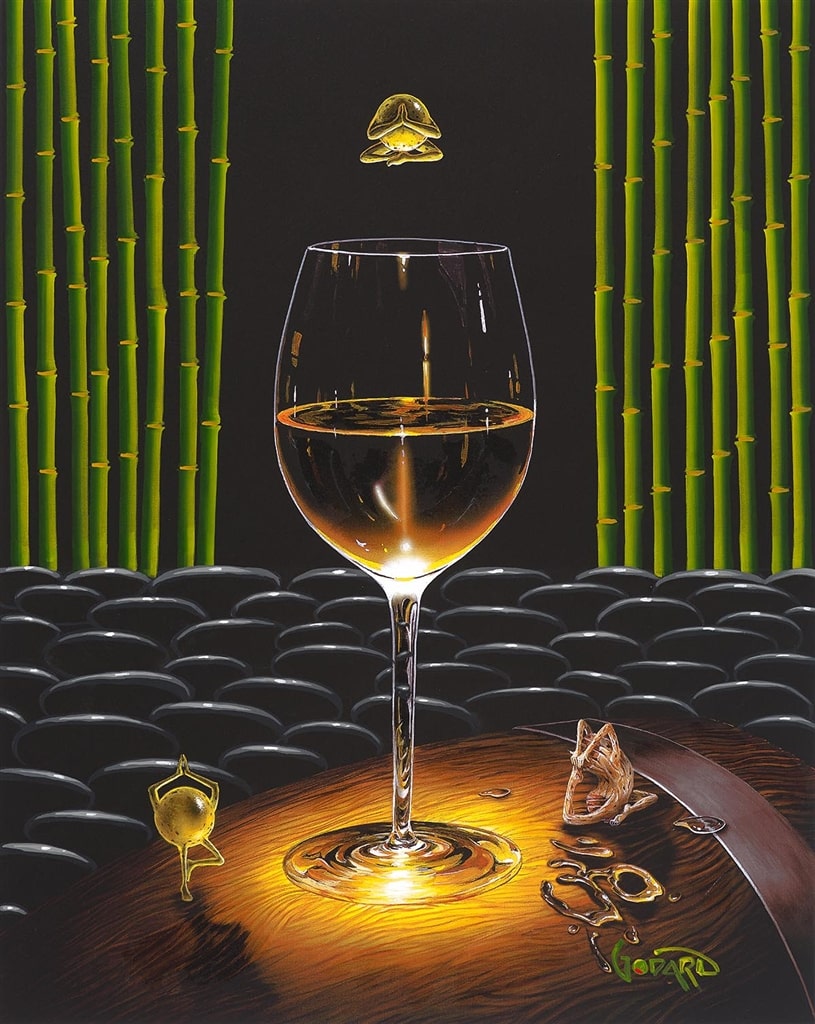 Not only does this mixed-media painting of meditating grapes and corks exude a zen-like energy, it also contains what Godard says is “some of the best lighting I’ve put in a painting.” Even the symbol on the bottom right made from a splash of wine lends to the ambiance.

“It looks like the number 30, but it’s actually the ‘om’ symbol, which a lot of people use when they meditate,” Godard says. 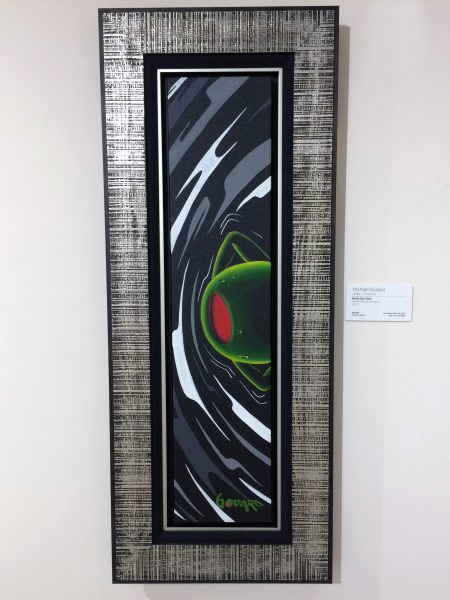 This unique painting may not have the hidden secrets of his other works, but the painting itself is a bit of a puzzle. It’s only after you know the title that you realize you’re looking at a martini from the top-down (i.e. a true bird’s eye view). Godard notes that the work’s unorthodox canvas size is no accident either

“People either have an abundance of paintings on the wall and don’t have a lot of room for others, or they have that little niche where there is not a lot of wall space,” he says. “This series was created specifically for that.” 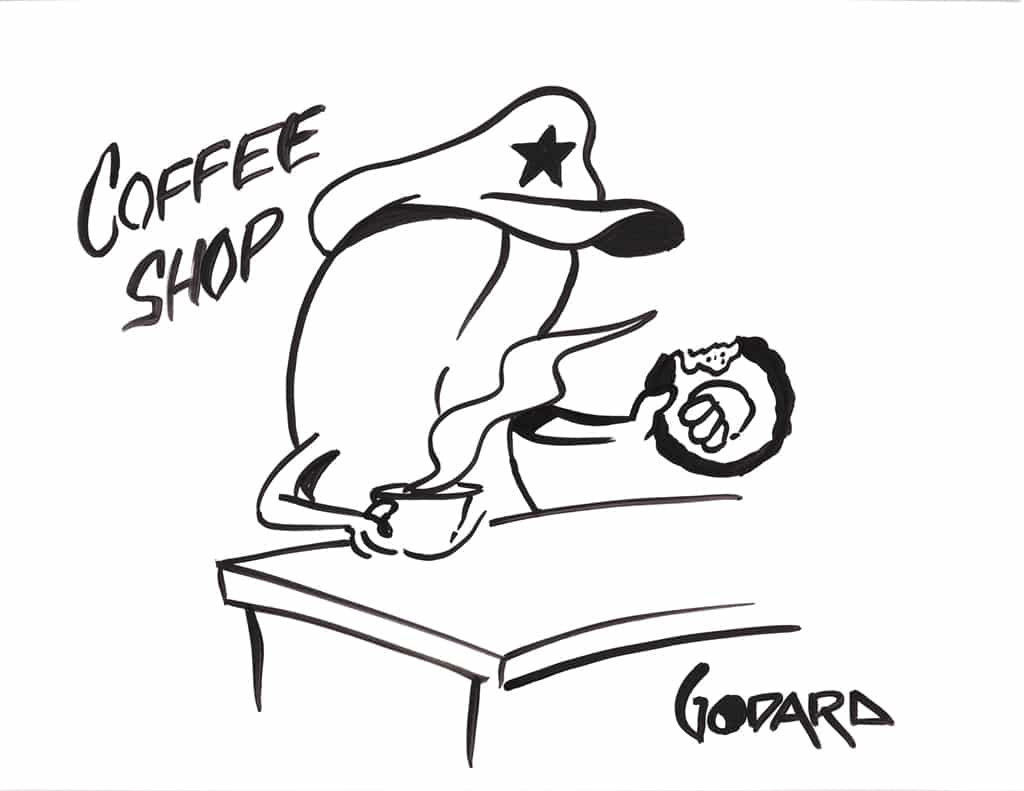 This “Brush Strokes” painting could be considered a major departure for Godard. Painted with one color and in a minimalist style, this work depicts a coffee bean police officer, which breaks from his typical characters of olives and fruit.

“Oftentimes these Brush Strokes are occupational,” Godard says. “This one goes along the typical thought of officers enjoying their coffee and doughnuts.” 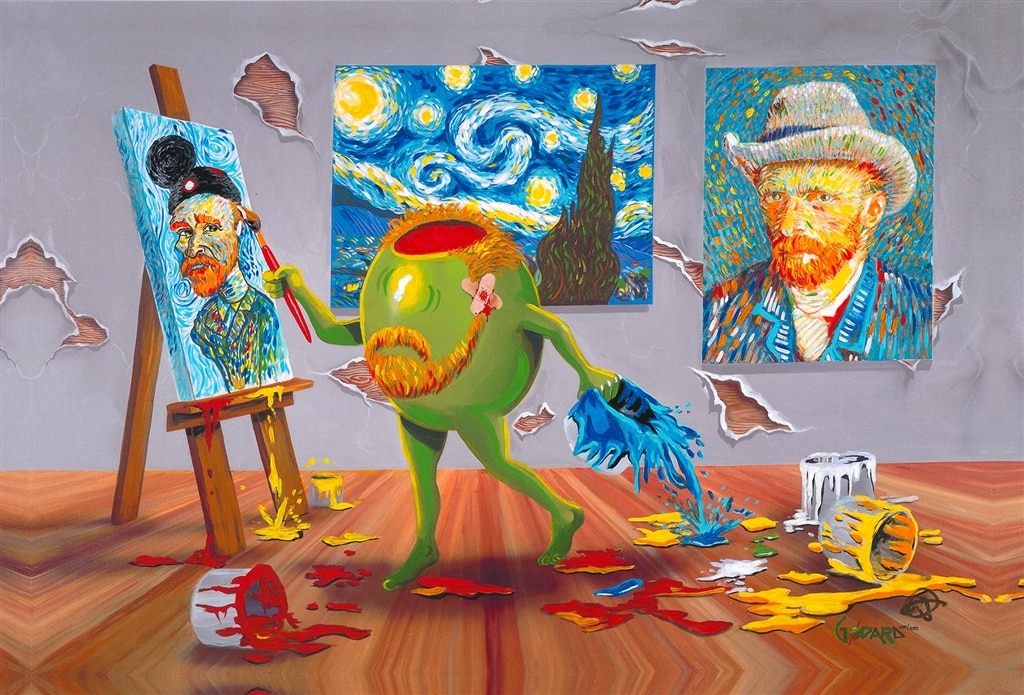 In “Van Gogh,” Godard imagines the famous Dutch painter Vincent van Gogh excited after spending a day at Disneyland. Godard admits the painting was an excuse for him to reproduce Van Gogh’s “The Starry Night” and have a little fun referencing Van Gogh’s infamous decision to cut off his own ear.

“In this particular one, Van Gogh is a little brighter, has a full head of hair, and is painting a self-portrait, but had so much fun at Disneyland he’s painting the Mickey ears,” Godard says. “What’s really fun is one of his Mickey Mouse ears is missing in the portrait.” 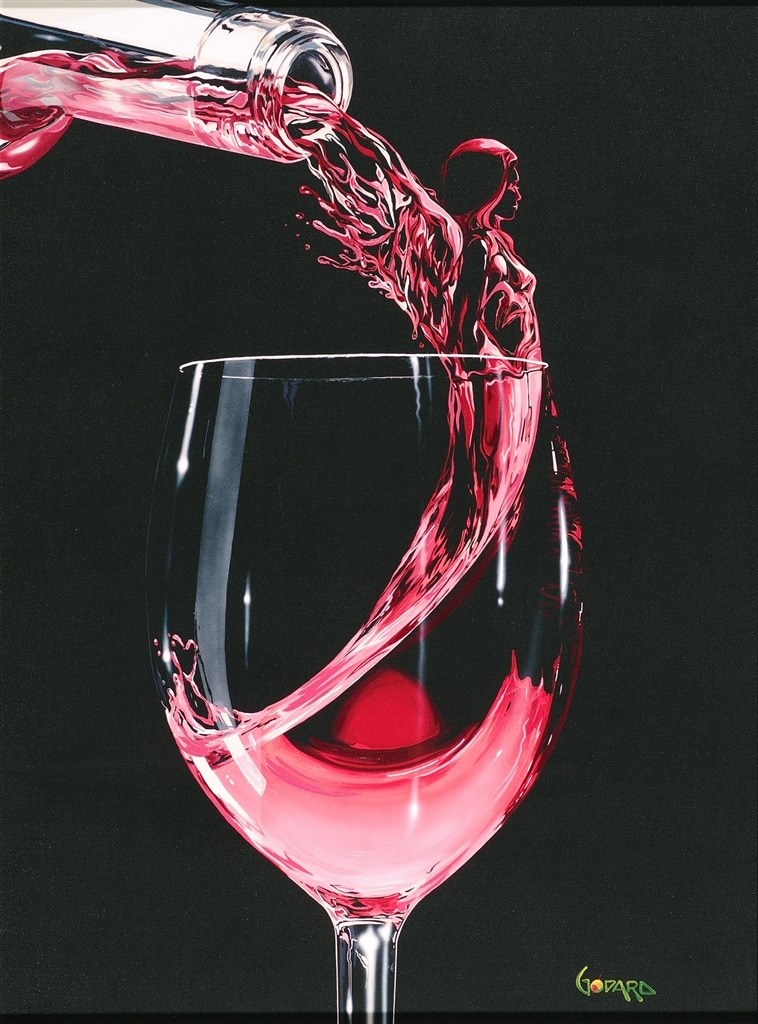 As much as Godard loves his fanciful works featuring mischievous olives, he also enjoys painting beautiful imagery. In this instance, he took a spiritual approach to depicting the splash of poured wine.

“This one in particular was done after I lost a friend of mine, and the thought of an angel appealed to me,” Godard says. “It’s also showing the beauty of wine and the colors in it.”

Interested in collecting the art of Godard? Contact our gallery consultants at (800) 521-9654 ext. 4 during business hours or sales@parkwestgallery.com for more information. 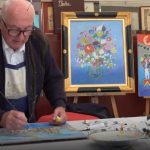 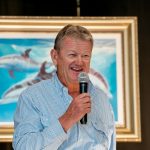