Mark Kostabi Reveals the Inspiration Behind 5 of His Incredible Paintings

One of the most recognizable artists to emerge from the 1980 New York East Village art scene, neo-surrealist Mark Kostabi, is world-famous for his faceless figures that bring to life themes of love, isolation, technology, and modern anxieties. 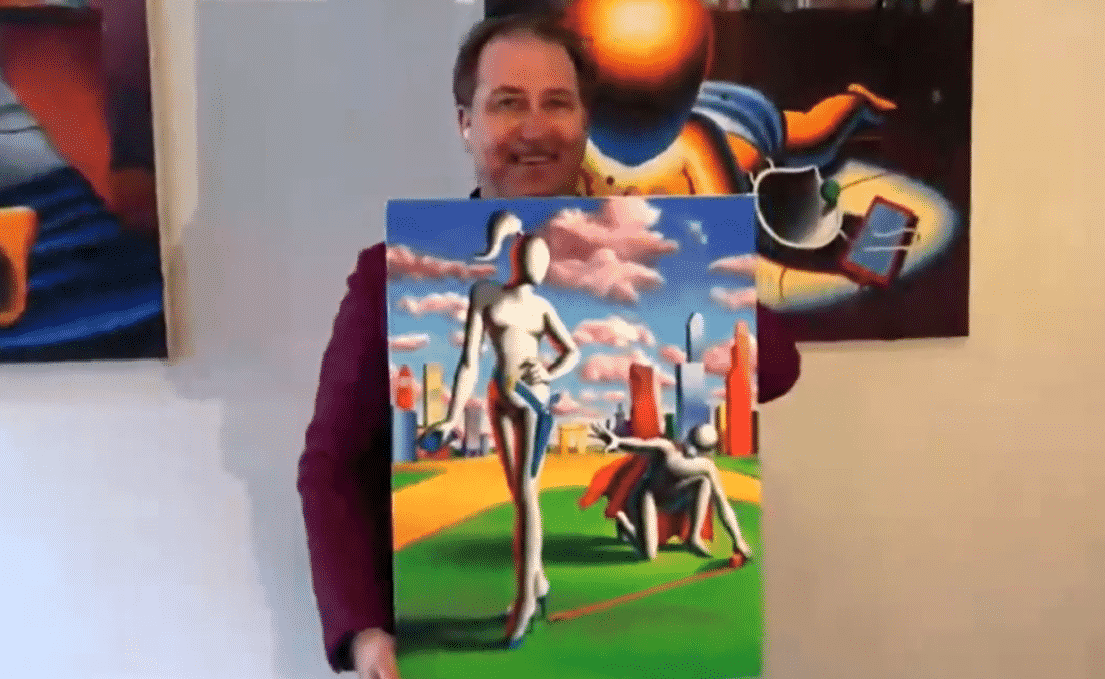 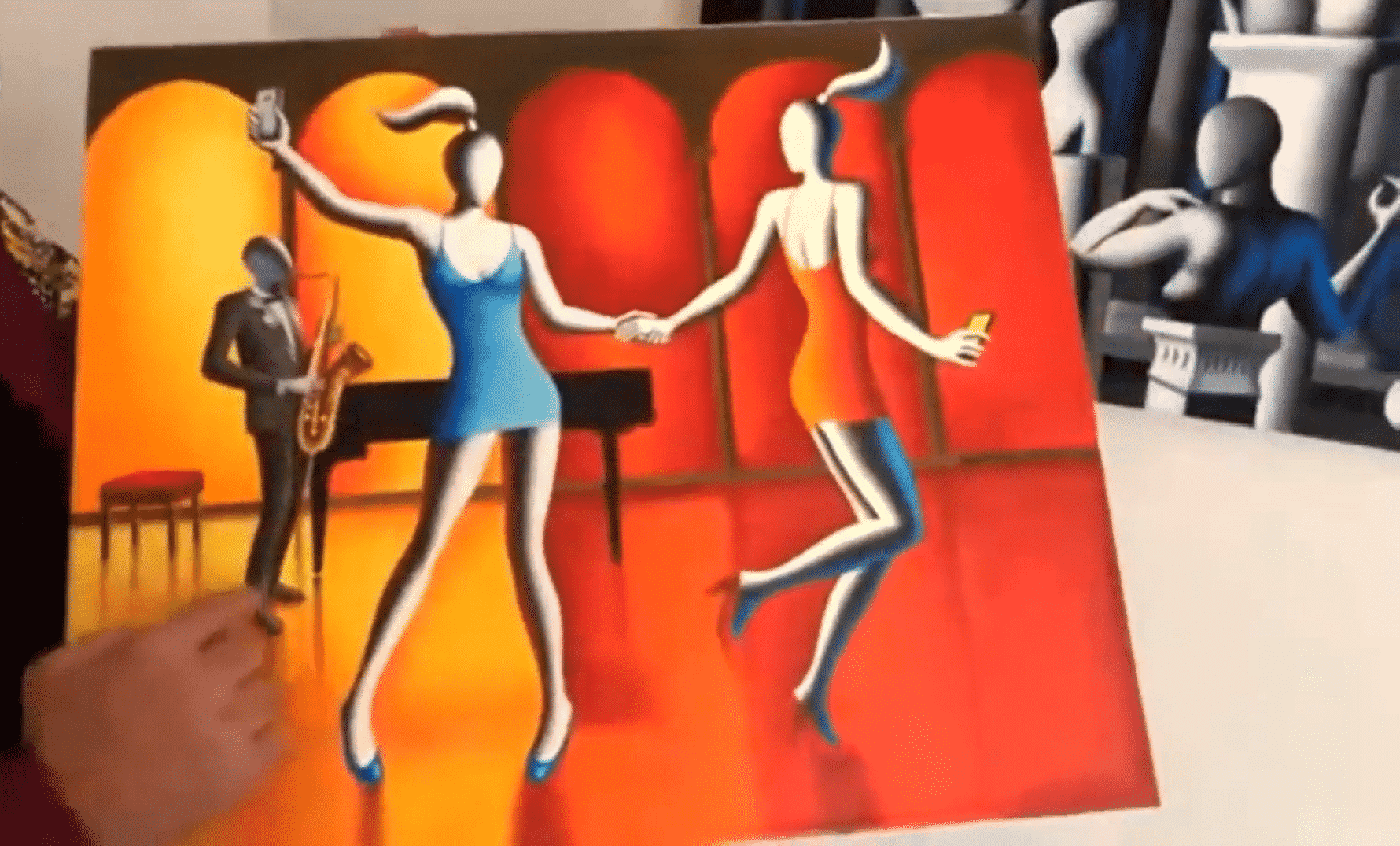 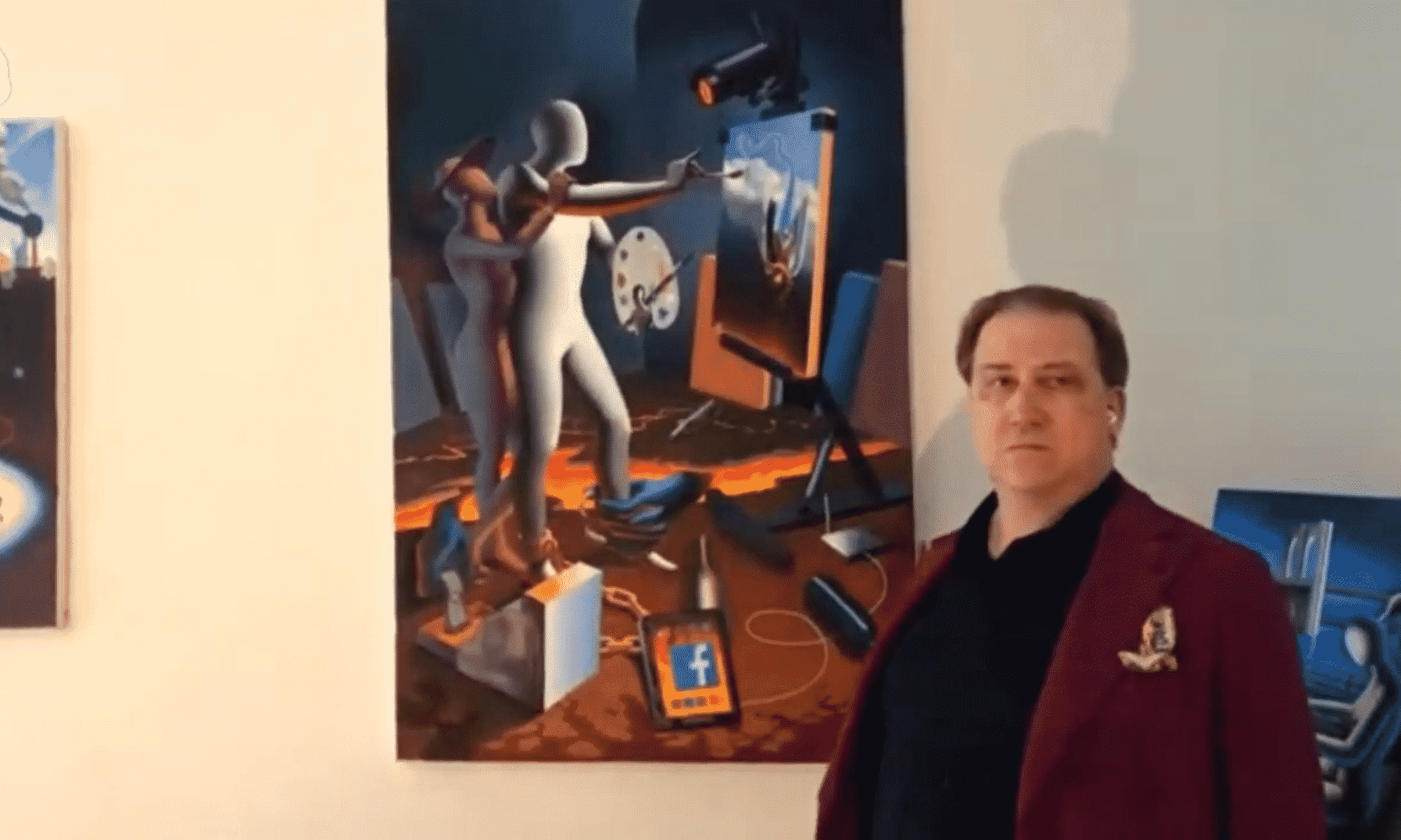 “I’m consciously reflecting the time we live in,” Kostabi said in an interview during one of Park West’s recent online auction weekends. “In the 80s, I was painting faceless figures with Walkman radios and boom boxes and backpack computers because that was the new thing back then. But that’s all gone and now the Kostabi figures have iPhones.”

Every week, Park West live-streams into the homes and studios of some of our most popular artists, including Mark Kostabi. Here are some exclusive insights into five of his incredible paintings that Kostabi shared with the collectors during one of our online events: 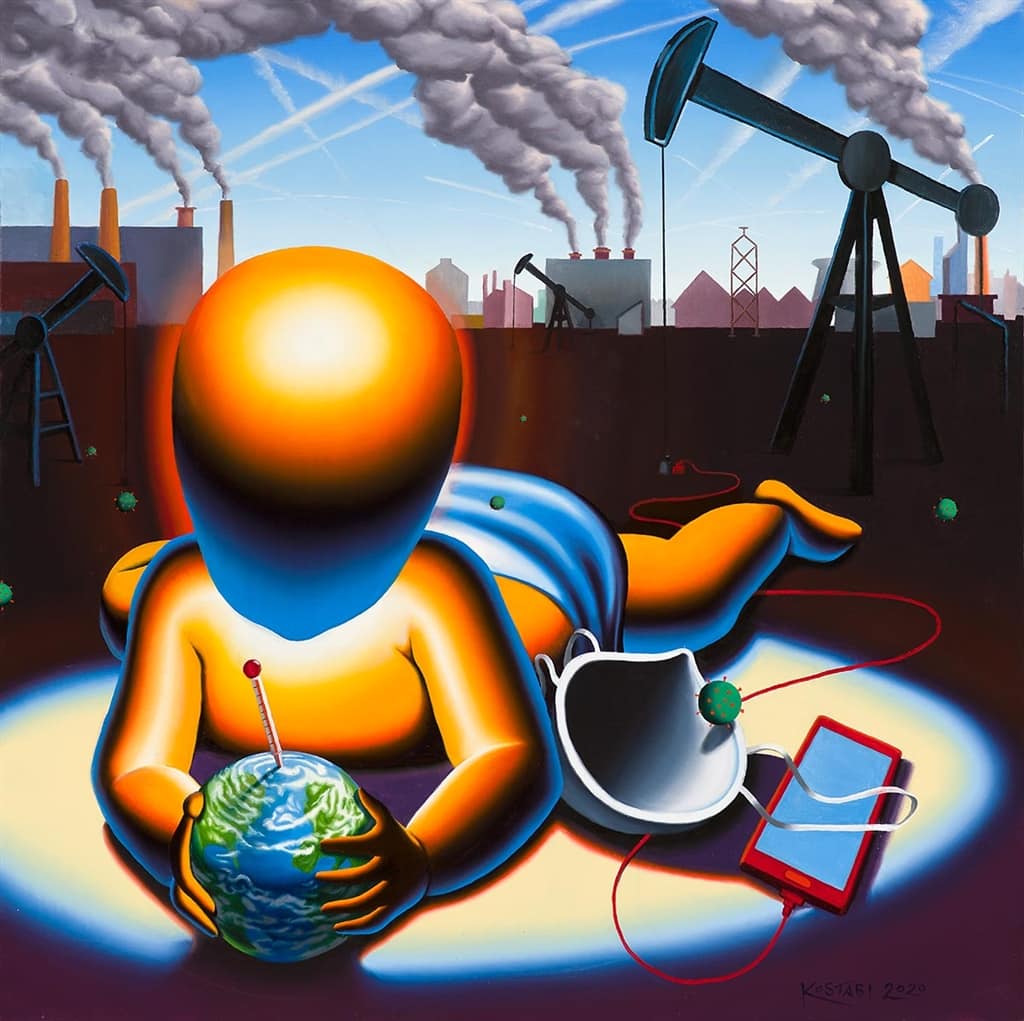 “This is obviously a very current painting. Here’s a facemask next to a child, our future, holding planet Earth with a thermometer in it. He’s checking the temperature of the globe because the future rests in the hands of the youth. . . There’s something about this painting, you can only appreciate seeing it in person . . . this white highlight, when you see this in person, the brushstrokes are actually circular. But it’s only when the client has it in their home that they can really appreciate that.”

“Going to the Distance” 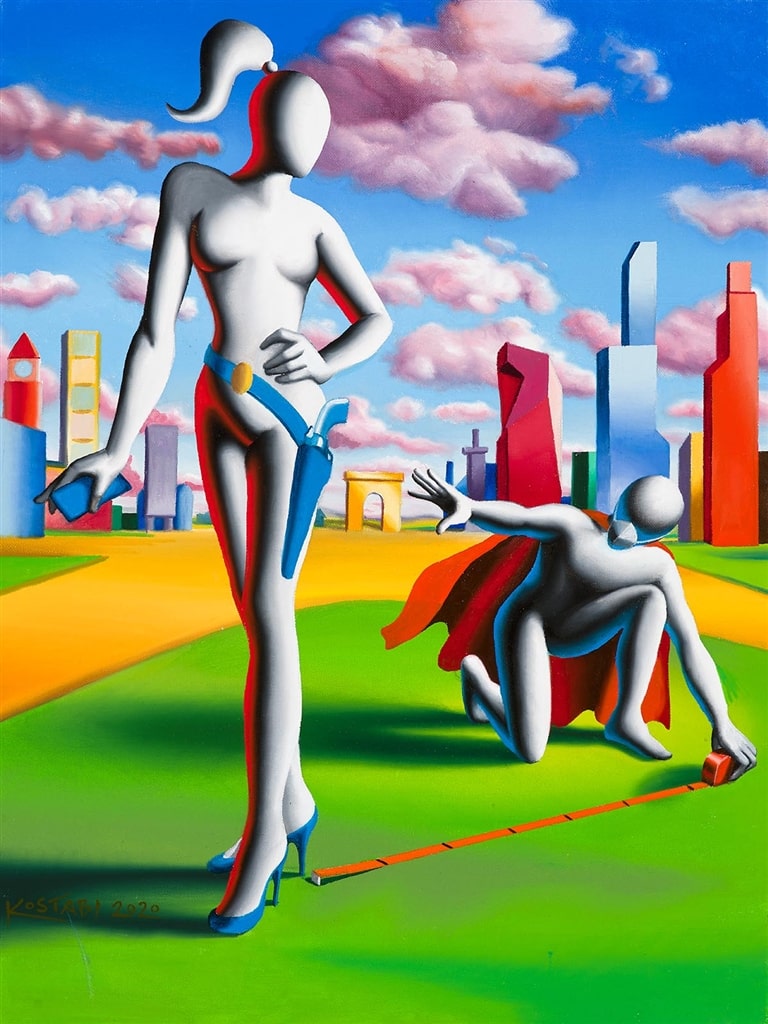 “Going to the Distance,” Mark Kostabi

“Here’s another one that deals with 2020 but in a more playful way. This painting is called “Going to the Distance.” It’s obviously about social distancing. This superhero is measuring six-feet, he’s got a mask on and a cape because heroes wear capes.” 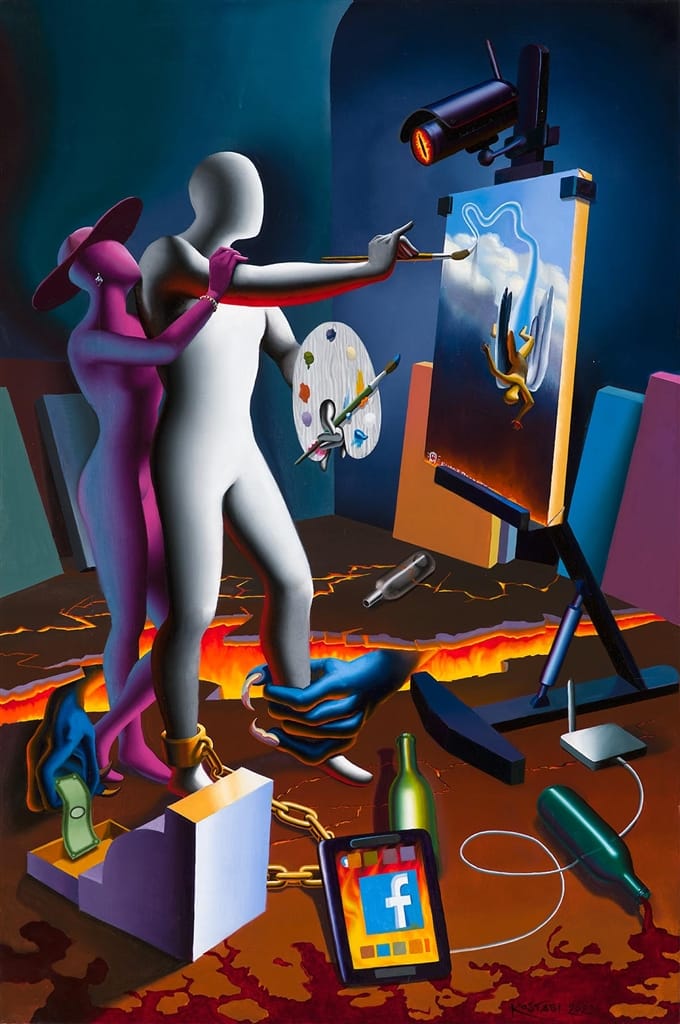 “This painting has ambiguity in it. First of all, some things are crystal clear. This artist is under pressure to produce. The devil is coming out of the floorboards . . . and one claw-like hand is grabbing his ankle while the other is taking the money that the art dealer paid him. The artist is also under the influence in many ways, not only from the art dealer and social media, but alcoholism, the chain, and the security camera watching with the Eye of Sauron. But here is the ambiguous part: This woman… is she helping him or is she saying ‘paint faster’?”

“Not A Care in the World” 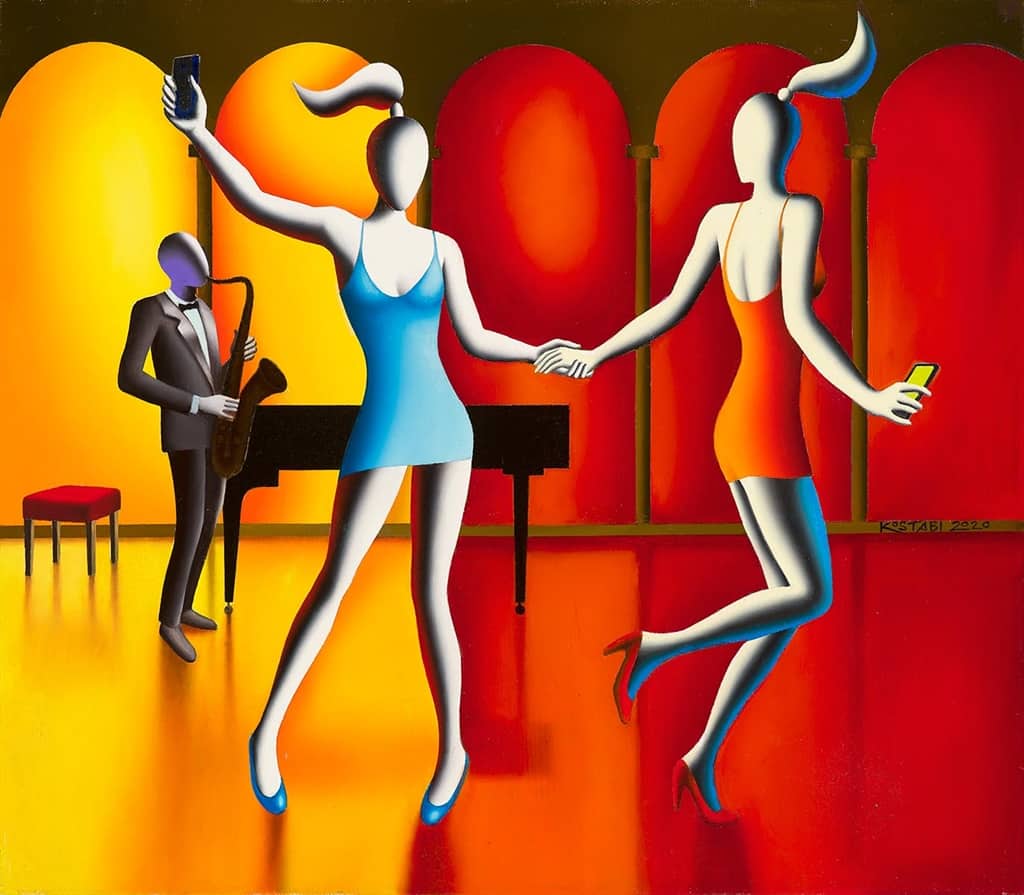 “Not a Care in the World,” Mark Kostabi

“Here is another musical painting. There’s a piano but the pianist is not there, instead there’s a sax player. There are two women dancing holding hands and holding cell phones. . . . This was inspired by a personal experience. Last year I went to a party, back when you could go to parties, and I witnessed this scene. I thought it was so emblematic of our times. They were about 20 years old, these two girls, and they were the only ones dancing to this live Jazz. They were dancing just like that, holding cell phones and holding hands.” 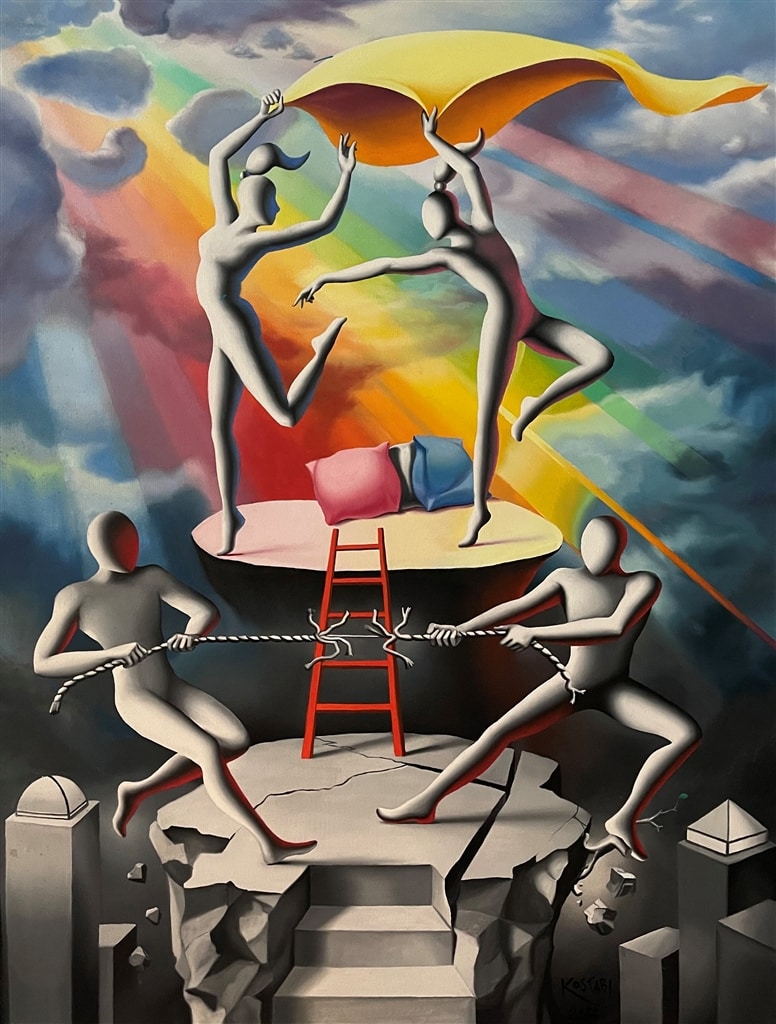 “This has a lot of symbolism in it. Basically, down below, there’s two men playing tug of war but the rope is fraying, so once one of them wins, then they both lose because they fall off the cliff . . . but they have a chance if they’d stop fighting and see this red ladder. Then they could climb up the ladder and spend time with these two beautiful women who are celebrating peace, love, and freedom. It’s totally optimistic at the top, and it’s a cautionary tale at the bottom.”

To collect artwork from Mark Kostabi, attend one of our exciting live online auctions or contact a gallery consultant at +1-248-354-2343 or at sales@parkwestgallery.com 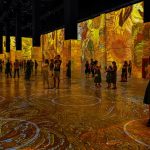 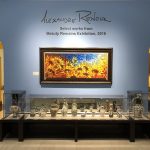