Mark Kostabi is unquestionably one of the most recognizable icons to emerge from New York’s legendary 1980s East Village art scene. A contemporary of Andy Warhol and Jean-Michel Basquiat, Kostabi invented a wholly unique art style that has resonated with audiences around the globe.

His universal, faceless figures inhabit surreal worlds of colors and contrasts. Worlds where his subjects interact with themes of love, isolation, technology, and modern anxieties. 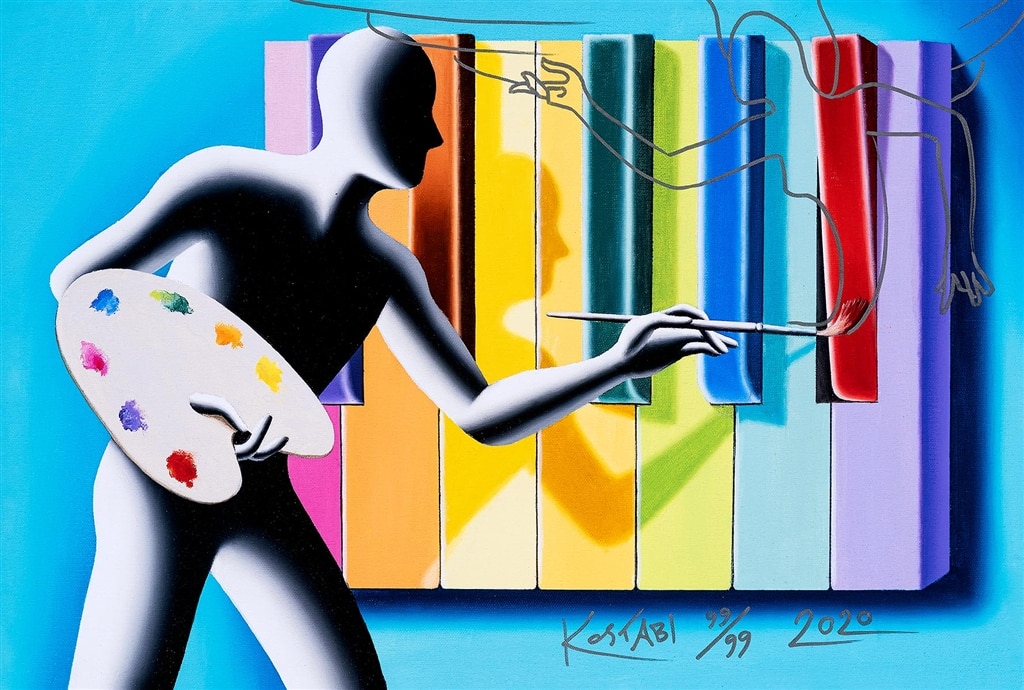 Driven by his lifelong passion for art, Kostabi studied his craft at California State University. At the age of 19, he began selling his designs to galleries in Los Angeles and quickly attracted celebrity collectors.

In 1982, he moved to New York, arguably the center of the art world at the time. Kostabi thrived in the city’s fertile art community, but his career skyrocketed after he was inspired by one of his artistic heroes, Andy Warhol. Warhol was famous for founding “The Factory,” the notorious art studio where Warhol would work with artists and artisans to mass-produce his famous designs. 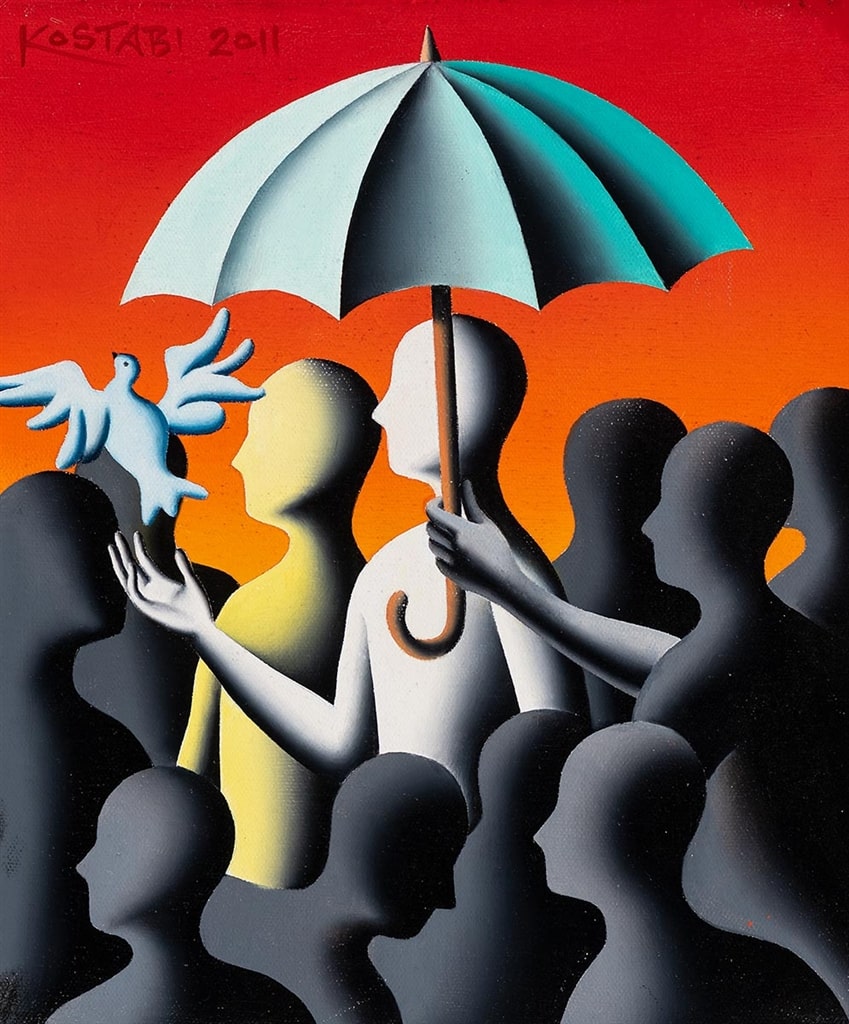 Kostabi, in turn, took that model to the next level. In the tradition of Warhol’s Factory or Picasso’s work with the ceramic artisans in Vallauris, Kostabi created “Kostabi World,” a studio in New York where he would work with teams of artists to create artwork in his trademark “Kostabi-style.”

“Kostabi World” became such an art world sensation that Kostabi was profiled in People Magazine, CNN, The Oprah Winfrey Show, and thousands of other media outlets.

During this publicity frenzy, Kostabi took great pleasure in antagonizing the media. He would provoke reporters with claims that others created his art or draw them into debates about art authorship. Meanwhile, the artist enjoyed endless free publicity for his mischievous jabs at the press. 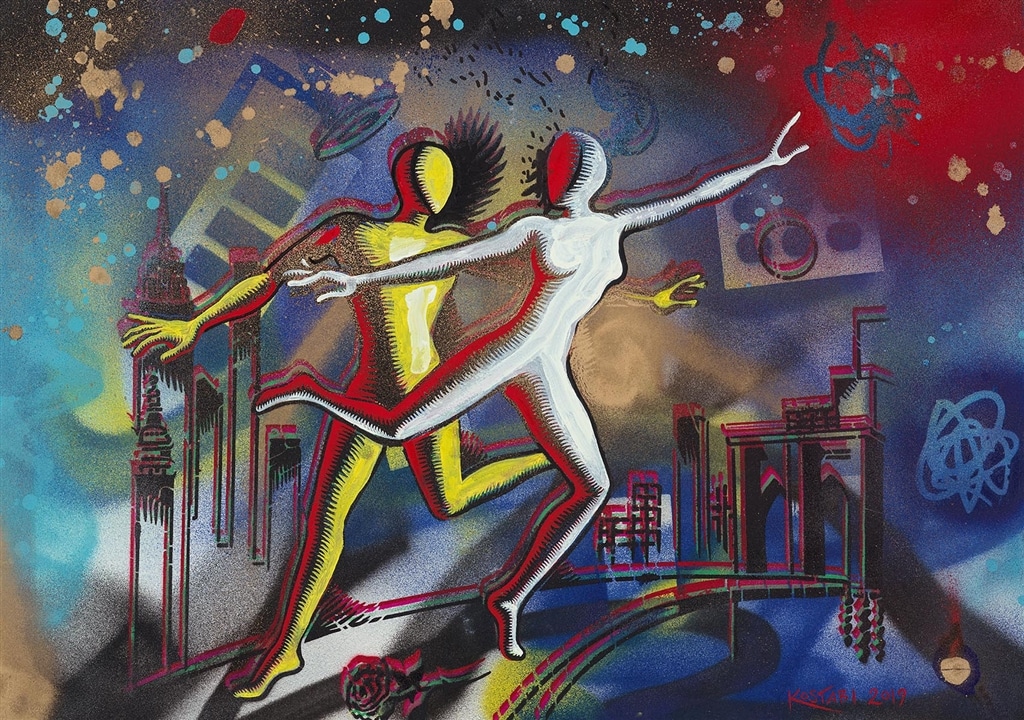 However, despite his playful comments, Kostabi always remained the true “author” of his artwork, a fact that is bolstered by the impressive awards and honors he has received throughout his career.

One particular highlight occurred during the height of the Cold War when Kostabi collaborated with a team of artists to create original Kostabi paintings in Russia. This led to Kostabi being featured at his own sold-out show at the Hermitage, making him the only contemporary Western artist ever to have a modern art show in Russia before the fall of the Soviet Union.

Today, Kostabi splits his time between New York and Rome, now painting more than ever before, and continues the work of “Kostabi World” as he brings his exceptional, enigmatic art to collectors worldwide. 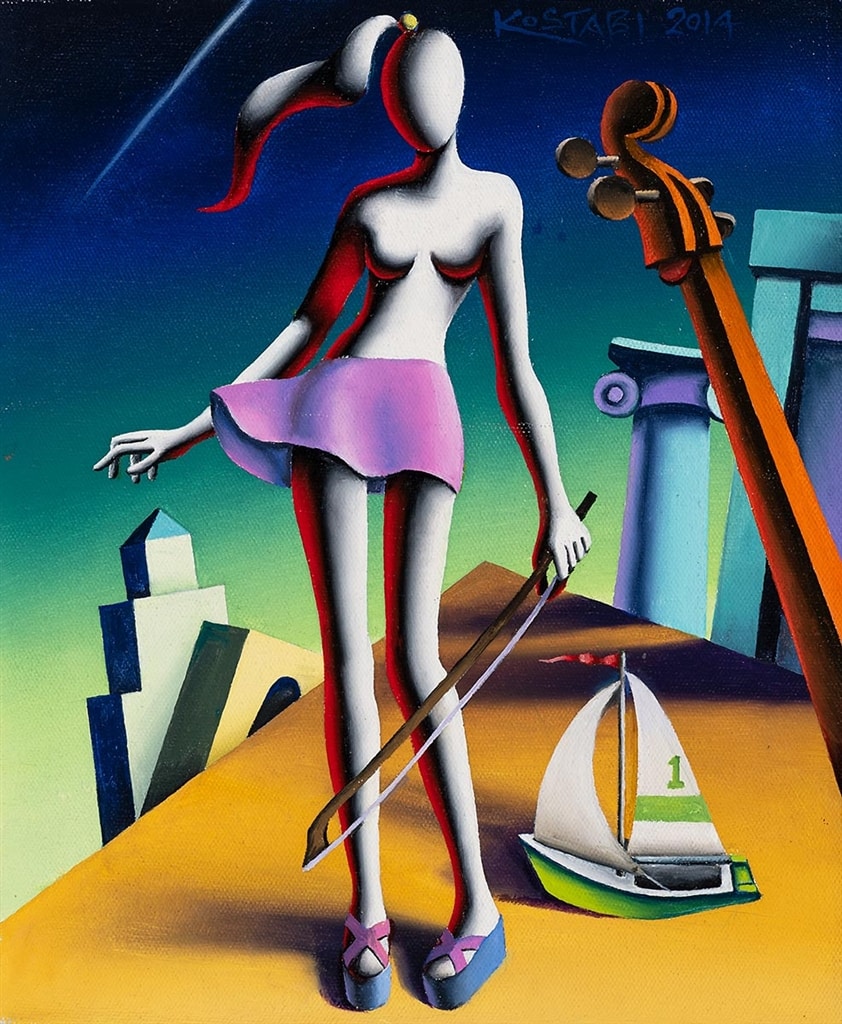 Kostabi’s early years in California played a significant role in shaping his artistic perspective. In addition to being at the forefront of the entertainment industry, Southern California was also a burgeoning think-tank for conceptual art, which had its first wave in early twentieth-century Paris, moved on to New York City in mid-century, and found an inspired resurgence in the greater Los Angeles area in the 1970s, when Kostabi was a student at California State University, Fullerton. During that period, the California Institute of the Arts in Valencia was emerging as a vital center for conceptual art, which stresses the primacy of an artist’s ideas over anything else.

Later, in the 1980s, Kostabi turned to a business model for producing his art, much as Andy Warhol had done before him. Adopting practices common to advertising, Kostabi developed his own “brand” for making art, conducting market research on what to paint and hiring creative thinkers to generate ideas and skilled technicians to paint them. 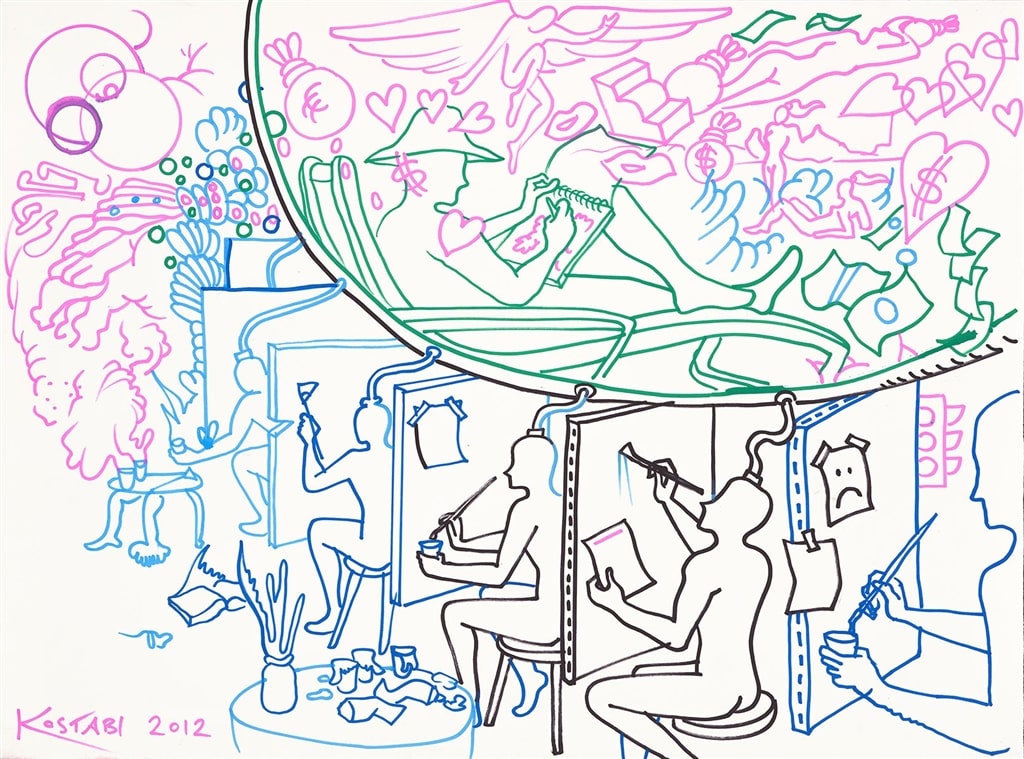 Kostabi’s paintings are easily identifiable by their characteristic faceless robotic figures who engage in a variety of activities that suggest poetic or metaphoric meanings. Overall, these paintings are largely philosophical, with many positing probable truths or posing unanswerable questions about the nature of being. His recurring subjects include romantic love, identity, artistic expression, the impact of pop culture and social media on modern life, and the erasure of human individuality.

“I’m consciously reflecting the time we live in,” Kostabi has said. “In the 80s, I was painting faceless figures with Walkman radios and boom boxes and backpack computers because that was the new thing back then. But that’s all gone and now the Kostabi figures have iPhones.”

Retrospective exhibitions of Kostabi’s paintings have been held at the Mitsukoshi Museum in Tokyo (1992) and the Art Museum of Estonia in Tallinn (1998). The famous Italian art historian and curator, Vittorio Sgarbi, curated a vast exhibition of 150 Kostabi paintings at the Chiostro del Bramante in Rome in 2006.

Kostabi’s permanent public works include a mural in Palazzo dei Priori in Arezzo, Italy, a large bronze sculpture in the central square of San Benedetto del Tronto, Italy, and a bronze portrait of Pope John Paul II in Velletri, Italy.

He has also been profiled on 60 Minutes, Eye to Eye with Connie Chung, A Current Affair, Nightwatch (with Charlie Rose), The Oprah Winfrey Show, Lifestyles of the Rich and Famous, Nonsolomoda, West 57th, CNN, MTV, and numerous television programs throughout Europe and Japan. NBC even built an entire episode of the hit show Miami Vice around his artwork.

In print, he has been featured in The New York Times, People, Vogue, Architectural Digest, The Face, Playboy, Forbes, New York Magazine, The Sunday Telegraph, Domus, Corriera Della Sera, Panorama, Artforum, Art in America, ARTnews, Flash Art, Arte, Arte In, and Tema Celeste. The many books published about Kostabi include Sadness Because the Video Rental Store Was Closed, Kostabi: The Early Years, Conversations with Kostabi, The Rhythm of Inspiration, Mark Kostabi and the East Village Scene 1983-1987, and Mark Kostabi in the 21st Century.

Another major milestone in Kostabi’s career occurred when the popular band Guns ‘N’ Roses chose his artwork as the cover for their acclaimed double-album “Use Your Illusion,” which has sold over 35 million copies.

Mark Kostabi Reveals the Inspiration Behind 5 of His Incredible Paintings

One of the most recognizable artists to emerge from the 1980 New York East Village art scene, neo-surrealist Mark Kostabi, is world-famous for his faceless figures that bring to life themes of [...]