Guests admire the art at the onboard gallery of Royal Caribbean International’s Quantum of the Seas.

A recent article published in the Huffington Post explores how Park West Gallery could influence the Asian art market.

According to the article, the cruise industry is booming in the Asia market, particularly in China thanks to a growing middle class that is 109-million strong. The industry has experienced growth by 79 percent from 2012 to 2014, and could become the second largest cruise market in 2017.

Read the full article: Cruise and Art Industries to Thrive Together in Asian Market

With cruise lines like Royal Caribbean International and Carnival Cruise Lines sending cruise ships to Asia, the article notes that the art market may receive a “shot in the arm” as well with Park West’s presence aboard these ships.

“In the short time we’ve been conducting auctions in the Asian market, we’ve seen an extremely favorable response,” said Scaglione. “We’re providing access to fresh, vibrant, engaging artwork from world-class artists who have never been made available in Asia.”

Thanks to Park West’s presence aboard six ships in the area, the gallery has sent almost triple the amount of artwork to Asian clients when compared to 2010’s numbers, and the number of clients in Asia who collect with Park West has increased by 114 percent.

Above, auctioneers conduct an art auction aboard Royal Caribbean International’s Quantum of the Seas

While the Asian art market did recently experience an overall drop in worldwide sales to $7.9 billion, a 31.3 percent decline from 2011, there is hope that the introduction of artists with Park West Gallery to Chinese cruisers may bolster the art market. As the article states:

Just as Chinese cruisers are seeking more options, Scaglione believes that new and seasoned collectors – including those in China and Japan – are developing a thirst for contemporary art that could be quenched by the cruise industry’s expansion into Asia.

“There is a growing demand for high-quality art, and the Chinese market is showing signs of long-term growth, so I imagine this will continue into the future,” Scaglione said. 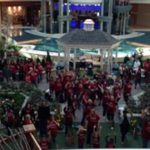 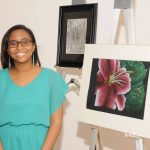