“I cannot convince myself that a painting is good unless it is popular. If the public dislikes one of my Post covers, I can’t help disliking it myself.” — Norman Rockwell

On March 8, 2009 the Detroit Institute of Arts (DIA) opened its exhibition, American Chronicles: The Art of Norman Rockwell. On the day of the opening, The Detroit Free Press “art critic” Mark Stryker (the newspaper’s music critic, who evidently was tapped to become the art critic after another round of Detroit business layoffs) penned his review. His opening tag line: “Love the show, hate the art.” You can save time by not reading the article. That tag line perfectly sums up Stryker’s opinion.

Online, a volley of reactionary comments to Stryker’s column lined up in the opinion blogs. They ranged from absolute venom (typical online stuff) to comments from readers who completely ignored Stryker’s opinion just to laud the show and encourage Detroiters to go see it and support the museum and its efforts.

Another part of the Free Press’s coverage was a side bar, “Was Norman Rockwell a Great Artist?” The DIA’s curator, a professor (whose mother modeled for Rockwell), and a well known Detroit artist weighed in. The artist, Charles McGee, expressed a prevailing attitude towards Rockwell’s work that dogged him during his life and has continued to this day. “I think Rockwell was a great illustrator. To me there’s a big difference between illustration and fine art. It’s not that each isn’t good in its own right, but one is selling a product as far as I’m concerned and the other is selling itself.”

I went to see the show with my 14 year old daughter, Amanda, who had written a biographical report on Rockwell for her history class a few months before. Her assignment was to write about an American artist, and when she asked me who she should consider (perhaps one of the benefits of having a dad in the biz) I replied immediately that it should be Norman Rockwell and expressed to her my reasons why.

Ironically, during her research for the report we as a family flew to Europe to attend a Park West Gallery collector event. One night at dinner we mentioned to a client that Amanda was researching Rockwell, and she proceeded to inform us that she had modeled for him when she was a child; her image appeared on a 1957 Saturday Evening Post cover. Big mistake to say that to me because I surely drove this woman “nuts” querying her about every aspect of Rockwell’s working process and his personality.

Amanda’s report included an interview with our guest — and she ended up with an “A.” Not surprisingly, Amanda was just as excited to see the show as I was. During the entire time she was working on the paper, her teacher was gently ridiculing Rockwell and needling her about her choice. His point was the same as Stryker’s and McGee’s: Not an artist, just an “illustrator.”

Where does this attitude come from? How can an artist who contributed so much to the culture and artistic identity of America (this is profoundly apparent when stepping into the final room of the exhibition and seeing each of the 323 Saturday Evening Post magazine covers he created during seven decades) be so pejoratively viewed by the art “establishment”?

The answer is obvious. There is a disconnect, a separation (more like a chasm) in the art world between the arbiters of what is and isn’t “art” and the American people. This was never more apparent to me than when we left the museum and I saw the lines of enthusiastic people; families with young children, seniors from my parents’ generation, and students. People of all races and ages, all queuing up for tickets and filling the galleries, anxious to experience Rockwell’s…art – actually hungry for it.

Rockwell was keenly aware of his image as a mere “illustrator” and frustrated enough to address it many times in his art. Trained as a “fine artist,” he was well steeped (as all of the great ones were) in the history and narrative of his profession.

In one of the photographs included in the exhibition of him working in his studio (in my opinion, the most important painting in the show – The Problem We All Live With, 1963), I caught a blurry image of Rembrandt’s etching masterpiece, The Hundred Guilder Print. It was in the upper left corner hanging on the wall amidst his own studies and drawings. This delighted me (I’m sure most people wouldn’t have noticed it) because I had just been marveling at the use of chiaroscuro in so many of the canvasses of Rockwell.

Rockwell’s Triple Self Portrait, one of the most popular and amusing of all his famous images, deals directly with this paradox of the power of his work and his popular image as a “commercial” artist. In it we see pinned to his canvas self-portraits of Durer, Rembrandt, and Van Gogh as well as a Picasso Cubist head. It is well known that Rockwell greatly admired the old masters and was enthralled by Picasso and even Pollack. The painting, which reveals his astonishing technique in the masterful articulation of the fabric of his shirt, the mirror into which he peers, and the golden helmet mounted at the top of his easel, defies us as viewers to ignore or diminish his prodigious mastery of oil on canvas while at the same time casts visual puns about who it is he is portraying.

In another captivating work, Art Critic, 1955, a young art student examines a painting through a magnifying glass while holding his easel and palette (with real globs of paint affixed). The woman in this portrait (based on a Rubens) looks back at the student with an expression of surprise, as if to say the young man is too close and is staring at her bosom. Behind him is a painting of three 17th Century Dutch gentlemen (again a nod to Rembrandt) who appear to stop their conversation to peer with surprise at the young student’s indiscretion.

This is a great and amusing scene until one looks at the technique Rockwell displays. It’s as if he says to us, “Take a look at my ‘chops,’ those of you who question my artistic legitimacy. I can do Dutch and French masters as good as they did and use them in the background of my paintings.”

From my own experience, it has been an honor to work with Curtis Publishing, the owners of the intellectual rights to Rockwell’s Saturday Evening Post imagery, and the Norman Rockwell Licensing Company, managed by the artist’s family, in the development of limited edition prints created exclusively for Park West Gallery clients. More recently, these works have been realized as hand-drawn lithographs created at the same studio French artist Marcel Mouly used for the creation of his lithographs.

I’ve also had the pleasure of offering original Rockwell drawings and seeing several of them collected. It is truly a thrill for an art dealer to be a part of the joy experienced by someone who has the rare opportunity to acquire something of this kind of rarity and historic importance. Through this process and in viewing so many of his works, I have gained a deeper appreciation for Rockwell’s art.

Norman Rockwell produced over 4,000 works of art in his lifetime, a lifetime that he devoted to unfailing artistic discipline and committed to sharing his view of our world with an emphasis on humankind’s higher morals and enduring values. His messages of family, equality, freedom, tolerance, and even human shortcomings touched more Americans than any other artist with our shared heritage. His contributions to the American spirit during World War II are legendary, particularly in the way that he focused not so much on our soldiers fighting abroad but on the heroism and bravery of the everyday people who remained at home.

So once again, we have to ask: How can an artist of such power, possessing spectacular technical genius and an unparalleled ability to communicate and touch so many, be so often dismissed by those who claim to wield the power of judgment as to what is and isn’t “art”?

The answer is too long and complex to be addressed here. I have written about it before and continue to vigorously share my own views on the topic. It has to do with the long (and unfortunate, in my opinion) history of art that extends from Duchamp to Warhol and resides today in the likes of Damien Hirst, whose works fetched unprecedented prices last year for “sculptures” of cigarette butts in medicine cabinets, dead flies on canvas, and his “masterpiece,” a dead calf in a glass case.

It has to do with the fact that when people crave the experiences that art can provide such as elevation of the human spirit, a demonstration of the results of unflagging dedication to hard work and excellence, and a jumping off point into the contemplations of human thought and spiritual meaning, these works of “art” leave us cold, unfulfilled, perplexed, and often angry when discovering the sums paid for them by museums and collectors. There is no way we can know what the future will hold for this kind of art.

As I travelled the halls of the museum with my young daughter in tow, as we moved past the paintings by Caravaggio, Rembrandt, Degas, Renoir, Cezanne, Picasso, and dozens of others who built on the narrative of the art that came before them, I couldn’t help but believe that as long as there are people on this planet, these works will be precious. They will forever be emblems of human greatness and our aspiration to reach for higher and deeper understandings of beauty and the miraculous around us. Thinking about Norman Rockwell, I saw him fitting perfectly into that same pantheon of masters in another hundred years.

We continued on to the contemporary wing of the DIA. We turned a corner and on the floor to our left we encountered a “sculpture” by American artist, Yayoi Kusama. The work entitled Silver Shoes is a clear acrylic box, encasing 23 shoes with cloth protrusions emanating from the openings, everything spray-painted silver. It’s a work, I am confident, Mr. Stryker would love. However, there was no line of people outside the museum queuing up to buy tickets to see it. No line of people behind the work patiently waiting to view it. No “audio tour” devices pressed up against people’s ears in contemplation before it. In fact, there was no one looking at it at all.

They were all downstairs, Experiencing Rockwell. 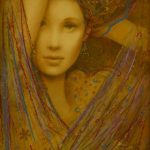 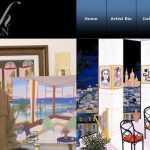