Eleven-year-old Autumn has been creating quite a name for herself in the art world, having been interviewed by Matt Lauer on “The Today Show,” and featured on “Inside Edition,” ABC, CBS, FOX and NBC news spots. The “pint-sized Picasso” has already commissioned six-figure works of art and garnered national and international acclaim for her colorful tributes to Marilyn Monroe. Her artistic style has been compared to iconic masters including Andy Warhol, Jackson Pollock and Pablo Picasso.

“The art of Autumn de Forest already exhibits a maturity and depth that many artists never achieve. She is an amazing person, an avid reader and a sponge for all that is good around her,” said Albert Scaglione, CEO and Founder of Park West Gallery.

Autumn’s greatest ability is her power to inspire those around her with the wonder of her creativity and the beauty of self-expression. She continues to reach young people and adults alike with her humorous and yet precociously articulate observations and insights into art, life and creativity. 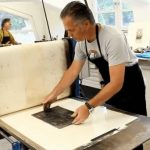