As a dynamic artist, Michael Godard is constantly reinventing and reshaping his artwork. In Godard’s latest collection, “Lights, Camera, Olives!” he does just that by taking his signature highly-detailed olives and molding them into something entirely different.

Godard’s “pop art” paintings along with his new series, titled “Brush Strokes,” present a versatile, bold side to Godard’s style.

The mischievous olives featured in Godard’s paintings are packed with personality. In “Brush Strokes,” the quirky olives lose their precise shading and intricate detail, but none of their charisma. To create his simplified works of art, Godard uses the least amount of strokes possible to construct his subjects.

“I’m looking for a very simple way to convey the image,” Godard says. “What I’m trying to do is address the challenge of saying something with body language rather than with a facial expression.” With his new style of minimalist artwork, Godard coaxes people to use their imagination to fill in the blank space he has left behind. He uses his skill as an artist to guide the viewer’s eye where he wants it to go.

“I could draw the outline, say, of an elephant, and without drawing the eyes or ears, just by looking at the simple shape, you’ll be able to tell what it is,” Godard says. The inspiration behind Godard’s new series comes from several principles he learned in art school. Godard says his professors taught him to never add to a drawing just to fill up space, and that “sometimes less is more.”

“Brush Strokes” also features a new Godard character to add to his collection. In addition to his olives, grapes and the occasional strawberry, Godard introduces a coffee bean for collectors who enjoy a cup of coffee as much as a glass of wine. Even though this simplified style is different than his signature detail-oriented paintings, the goal of Godard’s artwork is always the same: make someone smile.

“To me, the real value in the painting is being able to go up to a stranger and say ‘hey, check this out, what do you think?’ and let’s have a laugh together.” Godard says, “That’s what gives me the greatest joy.”

Godard’s pop art-style paintings jump off the canvas with bold colors and thick splotches of paint. Godard says Jackson Pollock is one inspiration behind his free-spirited method.

Similar to Godard’s detailed paintings, his stylized artwork features much of the same subject matter like martini glasses and olives. Godard describes his Pop Art-esque works as “very loose and colorful” with an abstract style that still distinguishes the subject matter. Above his artistic diversity, Godard says his priority as an artist is to put his artwork into the hands of people who enjoy it. Because the simplified styles are less labor-intensive, Godard’s “Brush Strokes” and pop art series are more accessible to the people who want to take unique artwork home.

“If someone enjoys my art, I really want them to have it,” Godard says. 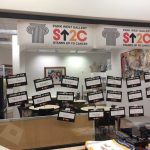 Park West Joins the Fight to Stand Up to CancerArt & Gallery News, Philanthropy 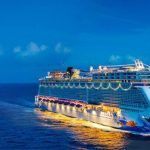