We often read Collectors’ comments on the Park West Gallery blog describing their pleasure at meeting artists at Park West Gallery events; this experience is reciprocated by artists. I have met many remarkable art collectors during the course of my association with Park West Gallery – all high achievers in their fields and all leading fascinating lives – but it is not every day that you meet an Astronaut.

Astronauts are so rare and legendary, like Rock Stars, it is hard to believe that they are actually real. So it was my great pleasure to meet Sherwood ‘Woody’ Spring, a decorated Colonel, test pilot, and an astronaut on the 1985 Shuttle Mission. Considering his career reads like “The Right Stuff” – he’s flown in space and performed two spacewalks hundreds of miles above the Earth whilst traveling at 17,500 miles per hour – he was very unassuming and modest about his achievements.

I met Woody and his wife, Debbie, at two Park West Gallery events; one a Baltic cruise in 2010 and again on a Mediterranean trip in 2011. On the second occasion we had several discussions about astronomy and space in general, with Woody indulging my enthusiasm but meager knowledge of astrophysics.

Even though he has military training and takes an incredibly detailed, pragmatic approach to his profession, I was struck by the degree of emotion Woody expressed when describing the wonder of gazing down on the Earth. Here was a life-changing event, that only a handful of human beings have experienced, and the thought of this fired my imagination. The painting I created, illustrated above, was a collaboration between Woody and me, with many emails transmitted between the two of us; Woody providing reference material and technical advice.

The main subject of the picture is the beauty of the Earth itself. I wanted to capture an impression of what Woody might have seen from the dizzying heights of space and also present this in painterly terms. I have always enjoyed the rich textures and colors of satellite photographs and incorporated some of their abstract qualities into the painting. I had great fun finding the appropriate brush marks to represent clouds and creating the Earth’s deep “blueness” by building up layer upon layer of color.

One of the facts Woody told me that caught my imagination is that the Earth’s atmosphere has multiple distinct layers of blue when viewed from outer space. On his mission, he counted thirteen different bands. Whilst I didn’t feature this around the Earth, preferring a soft halo, the background blue is made up of thirteen layers producing the vibrant near-black of space. Another amazing fact is that the astronauts experienced a sunrise (and a sunset) every forty-five minutes as they orbited the planet every ninety-three minutes; this is represented in the painting by a succession of stylized suns.

There is always a figurative element in my paintings; in this case, the female figure represents intuition and the horse, the power of the imagination. Here, I placed the mythical figure on a horse, representing the spirit of endeavor, curiosity and the incredible vision of one day venturing into the larger universe that galvanizes the space mission. She rides the Milky Way across the top of the picture on a contrasting crescent to the Earth. This was done with a little artistic license, the scientist in Woody informing me that the Milky Way is actually all around us, but I persuaded him this format would make a more dynamic composition.

The small pictures or insets around the painting are iconic insignia and memorabilia provided by Woody. From top left, they are: an observatory he visited as a boy, Astronaut’s Wings, Woody in his spacesuit, and also his Space walk. Along the base of the painting are a Crew Patch from his mission and the five continents as seen from space. From top right are an EVA Patch and the “Earth rise” seen from the dark side of the Moon during an Apollo mission. There is a small visual joke at the base of the painting – I usually include in my paintings a silhouetted self-portrait in a Rembrandt hat, but on this occasion it is a self-portrait in an astronaut’s helmet.

I had fun designing and making this painting. Woody has also expressed his enthusiasm for it. 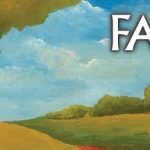