Many of our Park West collectors develop friendships with the art teams over the course of their land or sea vacations. Here’s a chance to get to know them better as they share their favorite adventures in the art world.

Nenad, from Belgrade, Serbia; and Katie, from Cardiff, Wales, have been with the art program at sea for over eight years. Originally, Nenad was a manager for the duty-free shops on board and Katie was a spa manager. The art program allowed the two of them to use their natural love of art in their work as well as providing an adventure they could take together. Since then, the auctioneer couple has been on countless ships and, most recently, is managing the startup art program on the Norwegian Escape, Norwegian Cruise Line’s newest ship. Nenad and Katie were the first art auctioneer team to join Anthem of the Seas and are now the inaugural team on Norwegian Escape.

What do you like most about being an auctioneer?
Nenad: The ability to create life-long memories and have people collect family heirlooms must be one of the biggest rewards I have as an auctioneer. Also, it makes me very happy that some of our guests are interacting with art for the first time on board our ships and, through seminars and auctions, we give them enough knowledge to fall in love and to start collecting art in that very short period of time.

Who is your favorite Park West artist and why?
Katie: My two favorite artists are Joan Mirό and Peter Max. Mirό has the ability to inspire that innocent child inside of us which we all need to let out sometimes. Peter Max stands as an icon for many generations. From my parents’ flower power revolution to environmental protection today.

Nenad: This is very difficult to narrow down, but if I had to choose one, it has to be Yaacov Agam. He is one of the most influential artists of our time. I love the geometry and precision found in his art. At the same time, he infuses himself into everyday life with Kinetic art. Nenad and Katie are still on the move even when they’re on vacation. Recently, they enjoyed skiing in Austria.

What is your favorite guest memory?
Katie: One of our fondest memories is of a great couple, Sarah and Sheldon. The first time we met them was sailing out of New York on the NCL Gem where we had nine fun days together during which we helped them collect a wide variety of art. We kept in touch, but didn’t know when we’d see them again. To our surprise, eight months later we saw them on the NCL Jewel. This cruise happened to be our anniversary and they surprised us with a Britto sculpture in a large box of Buddy the “Cake Boss” cannoli. Being thousands of miles from our families, this was a very meaningful gesture for us.

What has been your favorite port?
Nenad: After spending over a decade travelling the world, this is also a hard question. I would narrow it down to Florence, Italy. The port of Livorno gets you there. Visit the Adriatic Sea with a cruise ship and sail into the Bay of Kotor, also known as the Fjord of the South. Norwegian Escape is the newest ship to join the Norwegian Cruise Line fleet and just had its maiden voyage on November 14th. What is it like to be the first auctioneer on a brand new ship?
Nenad: It is very exhilarating. There’s so many things happening around you and there’s a lot of planning. Then suddenly, everything is up and running overnight. Once the cruises start, you get to meet some of the famous people, like the godfather for the NCL Escape, musician Pitbull, as well as some of the most loyal cruisers, many of which we have meet before. It’s like a family reunion. 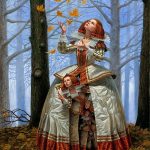 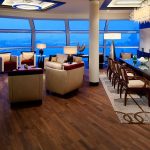