Characters make up the stuff of great stories, oftentimes personifying the poignancy and charisma of the human spirit. Whether in literature, cinema, or fine art, subject matter is commonly propelled by the visual characterization of history, philosophy, and emotion.

Unlike the protagonists in a novel or film, who are trapped within the medium of their own creation, the characters in artistic masterpieces live long lives and evolve for decades in real-time. Take for example, Salvador Dali’s muse and wife, Gala, who regularly appeared in the Surrealist’s interpretations for decades; or Pablo Picasso’s development of the Minotaur in his oeuvre.

In the world of Park West Gallery artist Yuval Wolfson, symbols – much like people – grow up. Therefore, in Wolfson’s artwork, his iterations of the peacock, cars and even landscape, are best understood as one would imagine a character in a coming-of-age story.

Wolfson’s work demonstrates that rare and unique quality sought by many artists: the ability to catch and depict change. His technical sensitivity is showcased in an analytic, cubist approach, whereby his compositions resemble stained glass windows or mosaics whose sharp delicacy and subtlety are illuminated by the passing hour. Wolfson’s visual motifs, like a classic protagonist, are dynamically in-flux, constantly seeking truth through time. Wolfson experienced great success during his first solo exhibition, titled “Monet’s Garden,” after enrolling in the famed Avni Institute of Art and Design in Tel Aviv. The exhibition featured 24 vignettes of the same scene, painted each hour with an impressionistic lightness, depicting the subtleties of passing time. To depict the transition between morning, afternoon, and evening, Wolfson used nuanced light and shadow, “as a kind of expression for changing feelings and changing moods,” the artist explained in an interview. Thus, time is materialized and likened to our everyday feelings in his analytic renderings of landscape. A character that dominates Wolfson’s oeuvre is the peacock, oftentimes accompanied by a family of smaller birds. The artist’s inclination to feature a peacock stemmed from real life. Wolfson recalls a colorful peacock visiting his family’s farm in Israel with an unlikely sidekick, a small brown chicken. Wolfson further noted that the peacock and chicken “were like a romantic couple.” Since then, his depictions of peacocks and birds have become visual projections of human feelings and relationships, and their growing complexities and rewards over time. Yet another protagonist in Wolfson’s oeuvre is the portrayal of a vintage car. In 1988, the artist painted his first large format car, a Russian truck, which acted as a dramatic portrait of a civilian cast under the pall of Soviet occupation and the Cold War. For nearly 20 years following his initial depiction of a Russian truck, Wolfson continued to paint the same image with slight adjustments as it, in his words, “grew up.” The characterization of the truck became a portrait of life in modern times, questioning the position of the individual in an era founded on endless progress and innovation. Wolfson further asserts: “It’s not a car. The cars are a self-portrait of something larger.”

To Wolfson, things are never exactly as they seem, and therein lies the beauty of the subject.

He concludes, “I mainly reflect what is inside. The outside is not real to me anymore; [it] is a reflection of what is happening inside myself.” 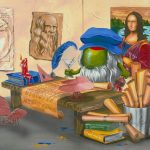 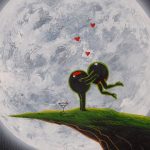