Yaacov Agam and the Guggenheim Museum

Today marks the 49th anniversary since the opening of the world famous Guggenheim Museum in New York City.

October 21, 1959 — The museum opens to an enthusiastic public on October 21, just six months after [Frank Lloyd] Wright’s death. From the beginning, the relationship between the breathtaking architecture of the building and the art it was built to display inspires controversy and debate. One critic writes that the museum “has turned out to be the most beautiful building in America . . . never for a minute dominating the pictures being shown,” while another insists that the structure is “less a museum than it is a monument to Frank Lloyd Wright.”

(Text courtesy of the Guggenheim Museum)

Park West Gallery world-renowned kinetic artist, Yaacov Agam, was selected in 1980 to hold his retrospective at the Guggenheim Museum in New York City:

In 1980, Thomas Messer, Director of the Guggenheim Museum in New York, invited Agam to conceive a large exhibition was poignantly entitled: “Agam: Beyond the Visible”. Talking of the basic principles behind his work, he wrote that for Agam “true reality is hidden beneath appearances and, in one sense, remains ‘abstract;’ complete and united from a divine outlook, it is nevertheless volatile and fragmented in the eyes of man; the noticeable fragments of reality are revealed to be simultaneous, parallel, overlapping, harmonic and contrapuntal; reality is not as palpable as certain static substances, but is more like a kinetic energy in perpetual motion; visibility and reality converse in a relationship of mutual transformation.”

Right in the centre of the great Guggenheim rotunda, Agam erected a monumental sculpture over fourteen metres high called the Tour Aenaitral (Aenaitral Tower), an anagram of Anita and Earl, the names of the Warsaw couple who commissioned the work. It comprises thirty-six superimposed parts measuring 1.44 x 1.44 metres on each side and its top reaches the upper ramp of the museum. Each side of the superimposed pieces is cut on the oblique and the tower is painted on all four sides using the same system as the three dimensional strips in his polymorphic paintings.

The tower’s structure recalls Agam’s pictorial vocabulary from the early 1950s, but its rhythmic ascent is also reminiscent of Constantin Brancusi’s Colonne sans fin (Infinite Column) erected in the Tîrgu Jiu Park in Romania 1937. Besides each conveying their own particular, and very different, artistic style, Agam’s tower and Brancusi’s column both have in common the idea of a steady vertical climb symbolising an aspiration towards the infinity of space, an ascension towards the spiritual invisibility hidden in the ethereal light of the cosmic void.

Agam’s sculpture rises on a vertical, central axis, and the space around it, in which works of art unfold in their often-halting climb, is lent weight by the circular ramp surrounding it. The visitor walking up or down this ramp gives a raison d’être to the empty space, and the thirty-six parts of the Tower create a rising and falling polyphony that may be observed from any point on the circular ramp, which is finally endowed with its own vocation. 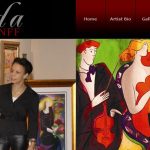 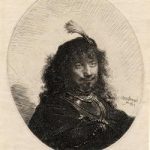 Art Is Nothing But the Dexterity Of An IllusionArtists & Special Collections, Rembrandt van Rijn