Stop and Smell the Roses with Simon Bull

Bright, vivid flowers have been a hallmark of Simon Bull’s art for the majority of his career. When asked why he enjoys the subject, his English charm can’t help but shine through.

“Flowers have always been important to me because they’re colorful, and I like color,” he says with a smile. For the first 15 years of his career, Bull painted what he saw, which were mainly landscapes and animals. Living in England, the landscapes were predominantly green, brown and blue, and with the exception of birds and flowers, he couldn’t include a lot of bright subjects in his paintings.

It wasn’t until Bull viewed the floral art of American artist Georgia O’Keeffe that he realized he could enter a whole new world of feelings and colors in his art. Eventually, he began moving the flowers closer to the foreground in his paintings, which progressed to flowerbeds, and finally, to the flowers themselves becoming the main subjects. “Back in my studio in England I had a lot of big red poppies growing right outside my studio window, so I focused in on those and really began to enjoy the red, the green, the blue and all different colors,” he says. “From that abstract nature of the color, I was able to develop more into a colorist.”

Along with a more intense palette of colors, Bull adopted a more abstract style when compared to the representational art of his early career. He now views the world with this sense of abstraction, saying a painting can never truly be what it represents, hence all art is abstract in one sense.

“A painting is the capturing of an idea, or the expression of an idea, it’s the materializing of something that is essentially immaterial,” he says. “I will look at the world around me, and the tree will go into this transitional process where it goes from being a tree to being an image in my head to coming out of my arm and becoming part of a painting.”

One bright hue often found in his floral art has a significant meaning to the colorist. Bull says red symbolizes life for him, so when he includes it in his paintings, he is enabling people to contemplate what is on the inside. “Red is a very rare color in nature, but it’s the most common color inside of people,” he says. “It’s the color of life, so when I paint red in the paintings, what I’m doing is I’m taking life and putting it on the canvas.”

Bull also links it to his Christian upbringing, where the Bible speaks of Jesus Christ dying and resurrecting. Interestingly, the words of Jesus are printed in red ink in “red letter” editions of the Bible.

“When we read the Gospel, if we believe, the life comes to life in us, it resurrects,” he says.

To collect the art of Simon Bull, Contact our gallery consultants at (800) 521-9654 ext. 4 or sales@parkwestgallery.com for more information. 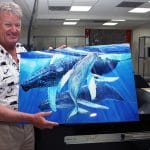 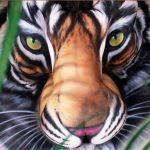