Above, Romero Britto with Brazil President Dilma Rousseff. Britto was recently named an ambassador for the 2016 Olympics. Photo courtesy of www.administradores.com.

World-renowned Park West Gallery artist Romero Britto has been selected to represent his native country when the 2016 Olympics come to Brazil.

Not in a sport, of course, but as an energetic ambassador that will rally fans to cheer on their athletes.

Britto revealed the news during a visit to Park West Gallery’s Miami Lakes location on Jan. 20. The Neo-pop artist was appointed to be a Brazilian ambassador for the 2016 Summer Olympics by the Brazilian Olympic Committee.

The news later spread when a picture of him wearing a shirt themed after Brazil’s flag adorned with the Olympic rings surfaced on his Facebook fan page.

As an ambassador, Britto encourages the participation and involvement of fans during the international athletic event. The role comes naturally to Britto, as he and his art aim to bring joy and happiness to others.

Along with Britto, other Brazilian ambassadors for the 2016 Olympics include Octavian Costa, Toni Garrido, Preta Gil, Luciano Huck, Rodrigo Lombardi and Roberta Sudbrack.

In keeping with the fun personality that produces bright, optimistic art, Britto joked about what he plans to do as an ambassador.

“I’ll just re-shape the country,” he said with a laugh.

Britto is no stranger to serving as a global sports ambassador. He was the official artist for World Cup 2010 and again in 2014. He hosted a painting workshop in 2010 to benefit FIFA’s charity program, “Football for Hope,” in South Africa.

“I couldn’t have imagined that one day I could do something out of my work,” he said.

The roles work for Britto on other levels. Growing up in Recife, Brazil, he said he originally wanted to be a diplomat and travel the world, but eventually pursued his calling as an artist.

Britto displayed this diplomacy when he held a painting party with the 2015 Miss Universe contestants at his studio in Miami on Jan. 11. The project benefited Best Buddies International, and represented what Britto said was the world coming together to celebrate beauty and happiness.

“The girls represent so many different cultures and countries,” he said. “To me it was a real privilege to work with them.” Britto combines cubism, pop art and graffiti painting into his style, citing influences like Pablo Picasso and Henri Matisse. After he moved to Miami in 1988, he was asked to create art for Absolut Vodka’s Absolut Art campaign, exposing Britto’s colorful artwork to millions.

Park West Gallery is proud to represent Britto and make his works available to collectors the world over, including three-dimensional works exclusively offered by Park West. 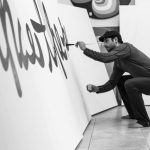 Lebo partners with LululemonArtists & Special Collections, In the News, Lebo 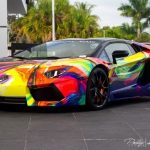