(Logo courtesy of the Girl Scouts)

Park West Gallery is pleased to have recently supported the Girl Scouts, and is just as proud to see one of its Los Angeles members earning recognition for their leadership.

In celebrating its 100th anniversary, the Girl Scouts aim to raise $1 billion so girls in every state can enhance the lives of their communities. In November, Park West Gallery contributed to this effort during the ToGetHerThere luncheon, where Park West Human Resources Director Nicky Yanke served as one of 26 mentors to the young girls. Park West Gallery staff along with artists such as Leslie Lew attend the ToGetHerThere Girl Scouts luncheon in Los Angeles.

It’s clear that mentoring and encouraging the emerging leaders in the Girl Scouts is having a positive impact. Christine A. Dean, director of development for the Girl Scouts of Greater Los Angeles, shared the following in a letter with Park West:

“I’m delighted to share this article featuring one of our Gold Awardees. This year, as we celebrate the 100th anniversary of the Gold Award, the highest achievement in Girl Scouts, we are grateful for your involvement and investment in [the] girls.”

The Los Angeles Times article talks about the efforts of Claire Dundee, who arranged and supervised the construction of a small basketball court for the Door of Hope transitional apartment complex for women and children in Los Angeles. The project earned Dundee her Gold Award, which as Dean notes, is the highest honor a Girl Scout can achieve.

Finally, on Dec. 22, in a light rain, a ribbon was cut and a dozen kids splashed out to the court to celebrate its creation. Of course, for the occasion, the Girl Scout brought cookies. Only this Girl Scout baked them herself.
“It was my favorite part of the project, seeing the kids fight over the balls and run out there and just start shooting,” Dundee recalled. “I just stood back and watched. It was really something.”

Park West Gallery is proud to encourage this type of leadership. Says Yanke of the Girl Scouts:

“These young ladies will not only be the next generation of successful female leaders, but also have wonderful input into our society with their compassion for people overall.” 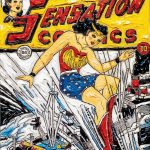 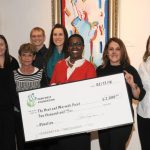