Norwegian Cruise Line is launching its 4,200-passenger Norwegian Escape, its largest ship to date and the third to feature hull artwork from a Park West Gallery artist.

Before it begins its seven-day Caribbean itinerary, the ship will be christened with a ceremony headlined by the ship’s honorary godfather, international music superstar Pitbull. The pierside ceremony takes place at Port Miami on November 9.

Norwegian Escape was built in 17 months in Germany. It departed to Hamburg for a two-night voyage to Southampton, England, and from there, is currently crossing the pond to Miami and will begin sailing year-round to the Caribbean next month.

The vessel is the fifth-largest cruise ship in existence, and is the first of the cruise line’s Breakaway Plus class. Escape features a number of intriguing attractions, including four major water slides, a boardwalk lined with restaurants, the District Brew House, and a spa that includes a snow room. The line’s “ship-within-a-ship” luxury area, The Haven, is the largest and most luxurious in the fleet.

Perhaps its most stunning feature is hull artwork depicting larger-than-life sailfish and other aquatic life. Like Norwegian Breakaway and Norwegian Getaway, Norwegian Escape features hull artwork designed by a Park West Gallery artist. In this case, the colorful marine wildlife found on Escape is the work of Guy Harvey. Painting the 1,065-foot canvas was quite a process, as shown in the cruise line’s video.

“Guy Harvey is the perfect artist to design Norwegian Escape’s hull artwork because he is so passionate about the sea, and his marine artwork is so life-like and well recognized,” said Andy Stuart, Norwegian Cruise Line’s president and coo, in a written statement. “We also appreciate how Guy is focused on ocean conservation and keeping the marine environment pristine, we plan to work with him to support the Guy Harvey Ocean Foundation as that goes hand-in-hand with our company’s strong commitment to the environment.”

Park West Gallery is pleased to be aboard hosting art auctions at sea during the inaugural cruise. Park West Auctioneer Nenad Stojanovic says it is a great privilege to be on board, especially on a vessel featuring the hull artwork of Harvey.

“We are delighted to be able to represent an artist that has painted the hull of the ship, and with that, enable our guests to collect art that will stay as a great memory for years to come,” Stojanovic says. “My team and I are very excited to welcome new and returning clients to our art gallery that has a prominent place between the atrium and two main dining venues.” As part of the celebration of working with Harvey and having his artwork on Norwegian Escape’s hull, Park West Gallery will offer promotional artwork by Harvey. The artwork, which features a marlin, is exclusively available aboard the ship, including the maiden voyage on November 14.

“This relationship will broaden the reach of my art for patrons and at the same time help spread the message for ocean conservation,” said Harvey of working with Park West Gallery. Norwegian Cruise Line held a UK launch of its new vessel on October 28, which included the formation of its first-ever “Squad” consisting of TV presenters, bloggers and cruise experts.

Norwegian Escape is 164,600 tons and 1,098 feet long, making it the largest in Norwegian’s fleet of 14 vessels. The ship was delivered to Norwegian Cruise Lines on October 22. 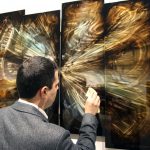 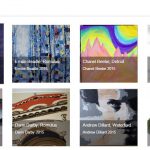