Park West invites the public to view “The Poetic World of Linda Le Kinff,” a solo exhibition featuring 56 works by Le Kinff, from March 6 through March 25 at its Southfield, Michigan gallery.

An opening reception with light refreshments will be held 7 p.m. to 10 p.m. on Saturday, March 5. Le Kinff will be present for the reception to meet with collectors and guests.

Many of the works, including rare, original graphic works and sculptures, have not been seen or offered to collectors prior to this exhibition, giving attendees the chance to acquire from a collection spanning several decades of Le Kinff’s oeuvre. Gorman says although influences of Braque, Modigliani, and Matisse exist in Le Kinff’s works, she has found a way to incorporate art history as a springboard to launch her own unique style.

“There is a significant difference between copying and translating,” he says. “It is one thing to copy a Braque painting; but to translate that sensuality into a painting never seen before, that is an attribute of a modern master. Her lines are simplistic and impactful. Her colors are deliberate and courageous. Her approach hearkens the past and brings forth a new form of visual art.”

Le Kinff served as the official artist for the Kentucky Derby in 2010 and for the World Cup in 1998. The latter distinction was further celebrated by having one of her paintings minted into a commemorative coin by the French government, an honor never before offered to a living French artist.

Her artwork has been featured in the Carrousel du Louvre in Paris and in exhibitions located in India, Lebanon, Korea and Japan. Among her accolades is a State Commission in 1989 when Le Kinff was awarded a State Commission by then-Mayor of Paris, Jacques Chirac, for a series of engravings of the French revolution to celebrate the bicentennial (1789-1989). Le Kinff’s artwork doesn’t depend on models. Instead, she draws on inspiration from attending concerts, acts like Cirque du Soleil, and her various travels abroad. Her subjects are often depicted in formal attire or performing music. Occasionally, they will be accompanied by cats, which Le Kinff includes as a way of balancing her compositions.

“My inspiration is everyday life and the spectacle of everything – culture, travels, concerts, going to the theater and movies,” Le Kinff says.

Le Kinff has traveled the world learning various techniques. She learned lithography in Paris, sand and sumi techniques in Japan and polished and varnished woodworking and wood paneling in Italy. She has also mastered watercolor, acrylic and airbrush painting as well as serigraphy. 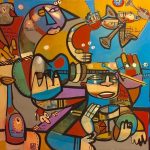 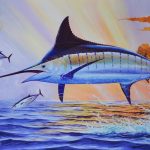