Radio host Alisa Zee spoke with Park West Gallery Founder and CEO Albert Scaglione on her “Sunday Edition” radio show on September 27. The segment focuses on how technology is changing art, something in which Scaglione is well-versed in from more than 40 years of experience in the art world.

Scaglione spoke about how he switched careers from mechanical engineering to the founding and operating of an art gallery, representing artists such as Peter Max. One of the latest artists to work with Park West Gallery is Guy Harvey, a marine wildlife artist who has a degree in marine biology and a doctorate in fishery management.

“He needed to be not around the oceans, but in the oceans,” Scaglione says. “He’s a diver, he’s a marine biologist, he’s a conservationist.” The relationship began when Norwegian Cruise Line sought out an artist to paint the hull of its newest ship, Norwegian Escape. Park West Gallery hosts art auctions aboard the cruise ships, and thus, the connection was made.

Scaglione says Harvey is one of three Park West artists who are experimenting with an art-making process the gallery has invested in called dye-sublimation. Using digital technology, dye-sublimation allows the gallery to transfer imagery onto materials such as metal, glass and plastic.

He says this process will be perfect in partnering with Harvey, as a glass surface pairs well with his underwater scenes.

“We’re going to be capturing his imagery in other forms, not just paintings,” he says.

Scaglione attests to other Park West artists being excited with dye-sublimation, as they can digitally control such aspects of the image as colors until it meets their standards.

“It’s the idea of taking digital representations of your imagery, transferring it to another surface, and then you having the ability to change that imagery…the brush no longer becomes a piece of wood with hairs on it, it really becomes a digital map,” he says.

Zee remarks that technology like dye-sublimation could lead younger generations toward the art world. Scaglione agrees, saying the digital age is already inspiring others.

“When the great artist sees new opportunity through development they jump on it, that’s why you see so much good art coming out,” he says. 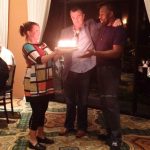 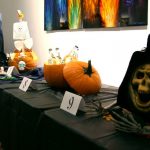