Video footage related to the infamous Gardner Museum heist may shed light on a case that has remained unsolved for 25 years.

Federal investigators released previously-unseen surveillance footage related to the Isabella Stewart Gardner Museum burglary that resulted in the theft of $500 million in art, the largest heist in art history.

This unidentified man exits the vehicle and is allowed into the museum through a side door by the security guard. The footage’s timestamp shows this occurred at 12:49 a.m. on March 17, 1990.

On the morning of March 18, 1990, two white men dressed as Boston Police officers gained entry to the museum by telling the security guard they were responding to reports of a disturbance. Against museum policies, the guard allowed them in. The thieves then subdued the on-duty security guards, handcuffed them and took them to separate areas of the museum’s basement.

The FBI says the men did not use weapons, the museum’s panic button was not activated and the police were not notified. Along with the stolen artwork, the men stole the surveillance footage from that evening, but not the prior night.

United States Attorney Carmen Ortiz explained that the video was released as part of an exhaustive re-examination of the available evidence.

“Today we are releasing video images from the night before the theft — images which have not previously been seen by the public — with the hope of identifying an unauthorized visitor to the museum,” said Ortiz in a written statement.

Among the 13 stolen items were works by Vermeer, Degas, Manet and three works by Rembrandt – including “The Storm on the Sea of Galilee,” his only seascape painting. To add insult to injury, the thieves cut the Rembrandt painting out of the frame when stealing it. “With the public’s help, we may be able to develop new information that could lead to the recovery of these invaluable works of art,” said Ortiz.

The focus of the investigation has shifted to recovering the art. Two years ago, the FBI suggested it knew who stole the artwork, but no one was ever charged. In a recent report, as described by The Guardian, the FBI is claiming that the suspects are likely deceased.

“Now Peter Kowenhoven, the FBI’s assistant special agent in charge in Boston, has settled the lingering mystery of why no one was ever charged: the suspects are dead.” 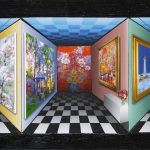 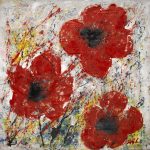