For over 40 years, Park West Gallery has been a world-wide source for collectors of original etchings by Rembrandt Van Rijn, the artist viewed by so many as the greatest etcher of all time. Learn all about Rembrandt and the art of etching at the Park West Gallery/Rembrandt Website >

RENO, NEVADA — Celebrating the life and legacy of the legendary Dutch painter and etcher Rembrandt van Rijn, the Nevada Museum of Art presents a major exhibit of etchings in Rembrandt: The Embrace of Darkness and Light. Displayed alongside a re-creation of the artist’s printmaking studio, 130 etchings will be highlighted along with tools similar to those Rembrandt would have used to create the etchings and drypoint prints for which he is so widely recognized. Drawn from the Museum of Fine Arts, Boston, the extensive collection is one of the finest of its kind in the United States and includes landscapes, portraits, historic depictions from the Bible, mythology and ancient history.

“An expressive storyteller, Rembrandt is perhaps best recognized for achieving dramatic narratives and emotionally-charged scenes by emphasizing and embracing contrasts between darkness and light,” said Ann Wolfe, Curator of Exhibitions and Collections, Nevada Museum of Art. “In this exhibition, viewers will experience a gallery space that has been transformed using elements inspired by the 17th-century Dutch architecture Rembrandt would have encountered during his lifetime.”

Presented in an intimate jewel-box setting, the small-scale etchings trace Rembrandt’s entire career as a printmaker and demonstrate his innate understanding of the human condition. Unlike many artists before him, Rembrandt recognized that the practice of etching responded best to a lighter touch resulting in a baroque richness of detail and texture. His method of copper-plate etching, using fine lines and flicks without outlines, was original and rarely used by artists who came after him.

The exhibition features a number of recognizable works including Self-Portrait Leaning on a Stone Sill, a 1639 etching, in which Rembrandt depicts himself as a Renaissance courtier dressed in opulent attire with an upturned collar and embroidered gloves—an appropriate costume for an artist just beginning to taste the fruits of his success following his permanent move to Amsterdam the same year. In The Woman With the Arrow (Venus and Cupid), a 1661 etching, Rembrandt depicts the female nude, a primary theme in his printmaking from 1658 to 1661. Deep in the shadows one can barely make out a mysterious face with coal-black eyes. Some have suggested that the figure is Cupid—taunted by Venus who has taken away his arrows. In the lively 1638 biblical etching depicting the story of Adam and Eve, Rembrandt seized the opportunity to explore the battle of the sexes with comic irony. Eve is clearly the stronger figure who enticingly displays the fatal apple, while Adam appears surprisingly weak and hesitant. The serpent, Satan, takes the form of a winged dragon, while a tiny elephant represents the animal population of a lush and leafy paradise.

Rembrandt: The Embrace of Darkness and Light is now on view through January 17, 2010. 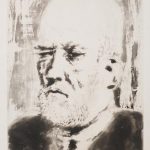 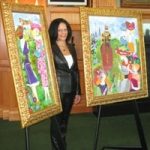