Those two words have just about nothing in common – unless your name is Guy Harvey. The artist and marine biologist has been able to successfully parlay his intense love of marine wildlife and his passion for art into a signature career, an unprecedented feat in the art world.

Beyond that, Harvey has forayed into several different projects that coincide with his love of marine art.

“The early influence of the parents was huge,” said Harvey on his career path in an article by T Brand Studio of the New York Times. “I’ve lovingly developed my techniques and broadened the media I use to suit the work I do now, but I’ve also turned it into a profitable business. So my hobby became my profession.”

On Thursday, May 26, Harvey officially completed a mural at SeaWorld Orlando. In April, the company announced that Harvey and his Guy Harvey Ocean Foundation, in collaboration with the theme park, would be painting the mural to promote ocean health and shark conservation. The mural shows a Mako shark (the world’s fastest shark) slicing through the water. It is an enlarged version of one of five works Harvey created specifically for the SeaWorld project. The completed work of art sits near a SeaWorld roller coaster aptly named Mako. The mural is part of a five-year collaboration between Harvey and SeaWorld. SeaWorld will promote Harvey’s shark conservation efforts through videos of Harvey discussing his expeditions and shark tracking projects. Harvey’s nautical merchandise – hats, gloves, shirts and more – will also be available for purchase.

“The mural will be right next to the displays,” said Harvey. “The patrons can learn all about these amazing animals.”

In a press release following Harvey’s completion of the hull, Harvey showed his appreciation for the opportunity to do the painting.

“I am deeply honored to be asked by Norwegian to paint the hull of the newest and largest ship in their fleet,” Harvey said before referencing his motivation behind his art. “The larger than life paintings of popular but endangered marine creatures in the Caribbean will heighten public awareness about marine life.”

The Mako roller coaster at SeaWorld will open to the public June 10. 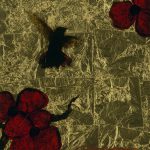 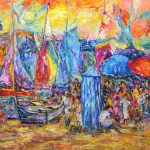