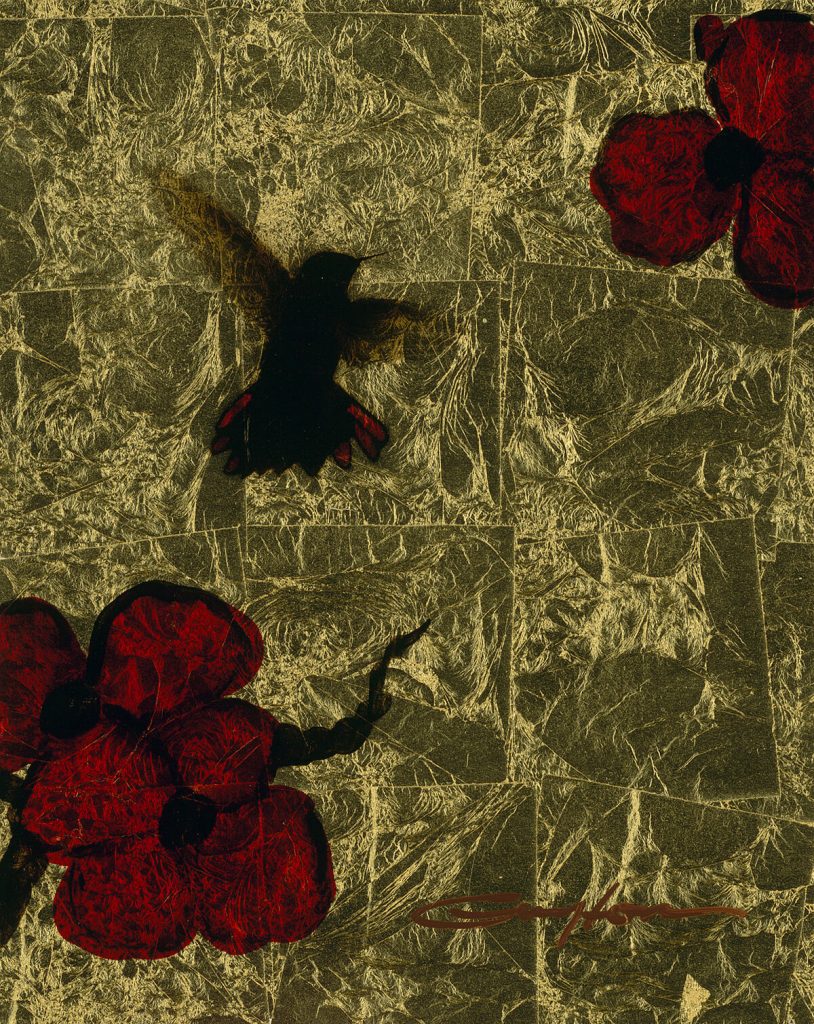 Gold leaf is so thin that it is said to be the width of a human hair, and is so light it floats like a feather when dropped.

After a year of experimentation, Patrick Guyton perfected his “gilded modernism” technique for creating lustrous works of art with this very material. It was working with such fragile materials that inspired Guyton to paint subjects such as fluttering hummingbirds, graceful women and delicate bonsais that match the characteristics of gold leaf.

“What I like to put across is that serene feel, it’s almost like a zen quality to the pieces,” he says. “It’s that relaxed ambiance and the depth that you can look into something and make up what you’re seeing out of it.”

The motivation for depicting hummingbirds derived from Guyton’s choice of medium. Guyton says he couldn’t imagine painting something heavy or cumbersome on such light materials, so he sought out subjects that would match the substrate.

Guyton says this led to experimenting with depicting hummingbirds in his art. After painting several birds, he wasn’t sure whether to pursue it. While contemplating the subject one day, he opened up his drink – a Snapple – and read the bottom of the cap; he was stunned to see that it said “a hummingbird weighs less than a penny.” He owns the cap to this day as a reminder.

“I thought ‘well, okay, let’s do hummingbirds,’” Guyton says with a smile. 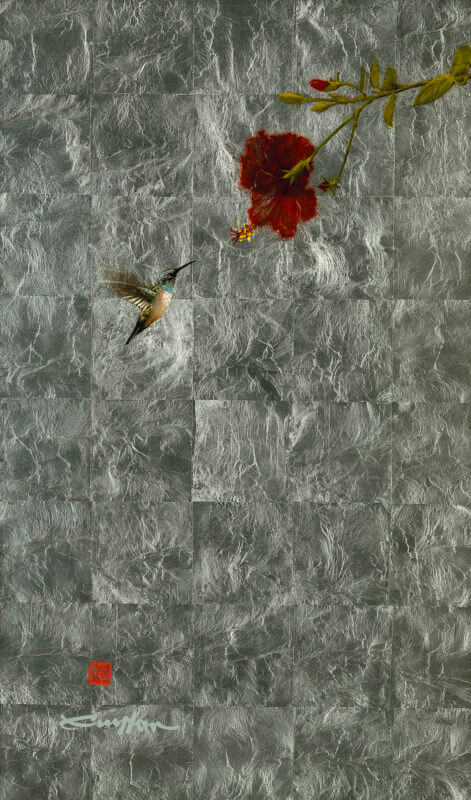 In a similar sense, Guyton portrays swans floating in water, whether they are real or origami swans. In fact, he had a serendipitous occurrence with origami swans similar to his hummingbirds. After he discussed the subject of origami swans with his wife, he was driving to his studio and a woman pulled up next to him. When Guyton glanced over to her car, he saw an origami swan dangling from her rearview mirror.

“So I called my wife and said ‘I think I’m going to paint origami swans,’” he says. “There have always been these little drops and hints over the years.” 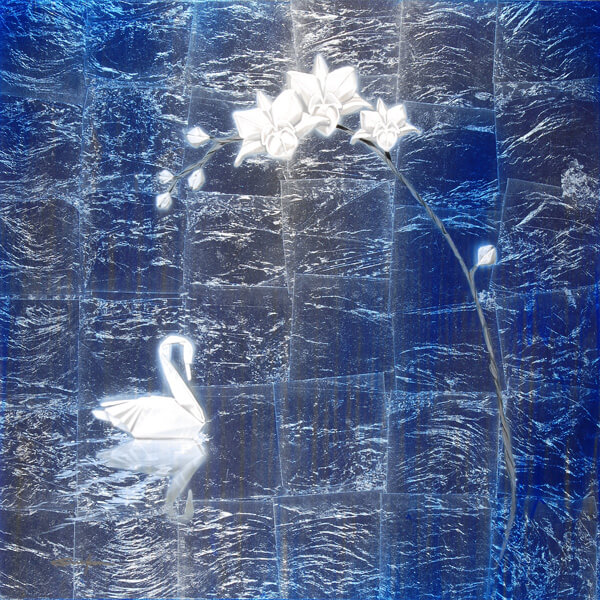 A natural extension of the themes that Guyton portrays is the bonsai tree. He admits that the first bonsai tree he owned died shortly after he planted it, but he loves bonsais so much that he began painting them, as they would last forever in a painting.

“Doing trees is very therapeutic, but it’s also very psychological,” he says. “Trees explain a lot about a person’s state.” 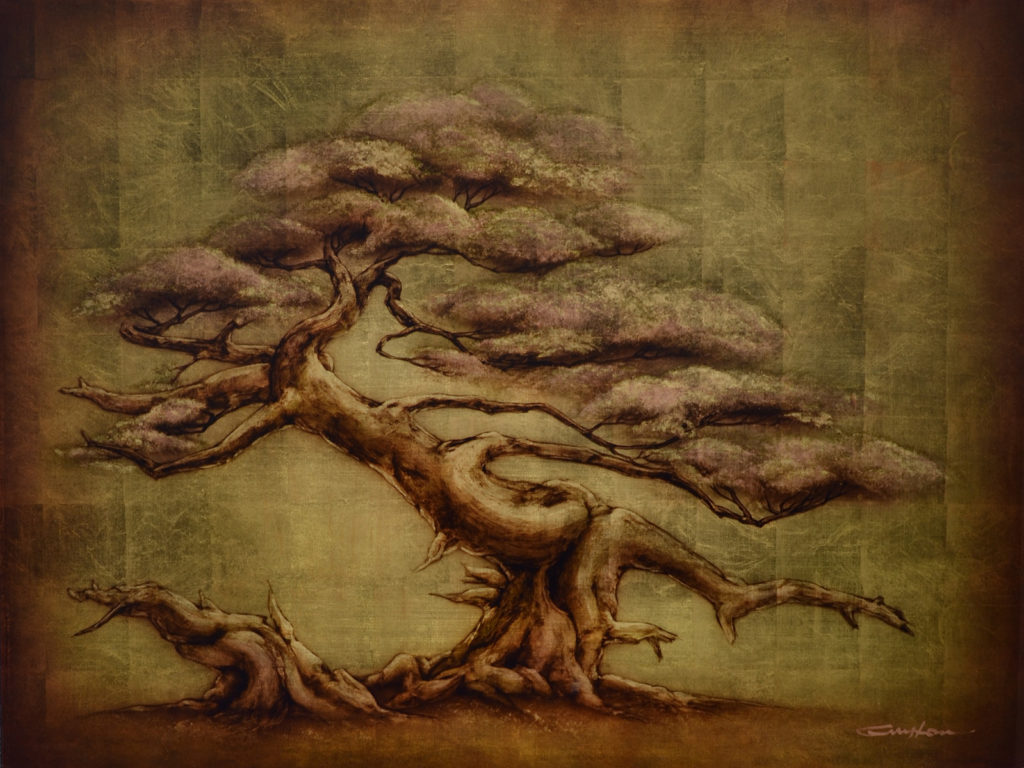 Perhaps his favorite subject to depict, however, is female figures. Guyton can only create about 10 to 12 figures in a year, but he loves making them. In keeping with the leafing, the women are often shown draped in veils, sheets or robes.

“I’m not trying to highlight a body so much, or a figure, as much as I’m trying to get that statuesque figure and an emphasis on the fabric,” he says. “It’s the closest way I can get to doing sculpture mixed in with doing painting.” 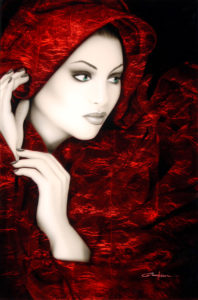 Guyton says part of the joy in creating art for him is that his substrate allows him the freedom to paint whatever he likes, so he is free to continue experimenting with different ideas and styles.

“It’s all part of the same feel with the Asian styling – I’m not an Asian artist, but I like to skate up to the line of Asian art and bring the American, modern version of a very beautiful thing they developed,” he says.

Contact out gallery consultants for more information about collecting artwork by Patrick Guyton. 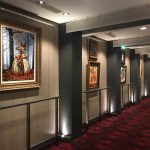 Talking to auctioneers aboard Royal Caribbean’s new ship, Harmony of the SeasArt & Gallery News, Cruise Art Auctions at Sea, In the News 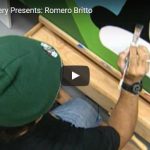