Behind the Artist: Scott Jacobs 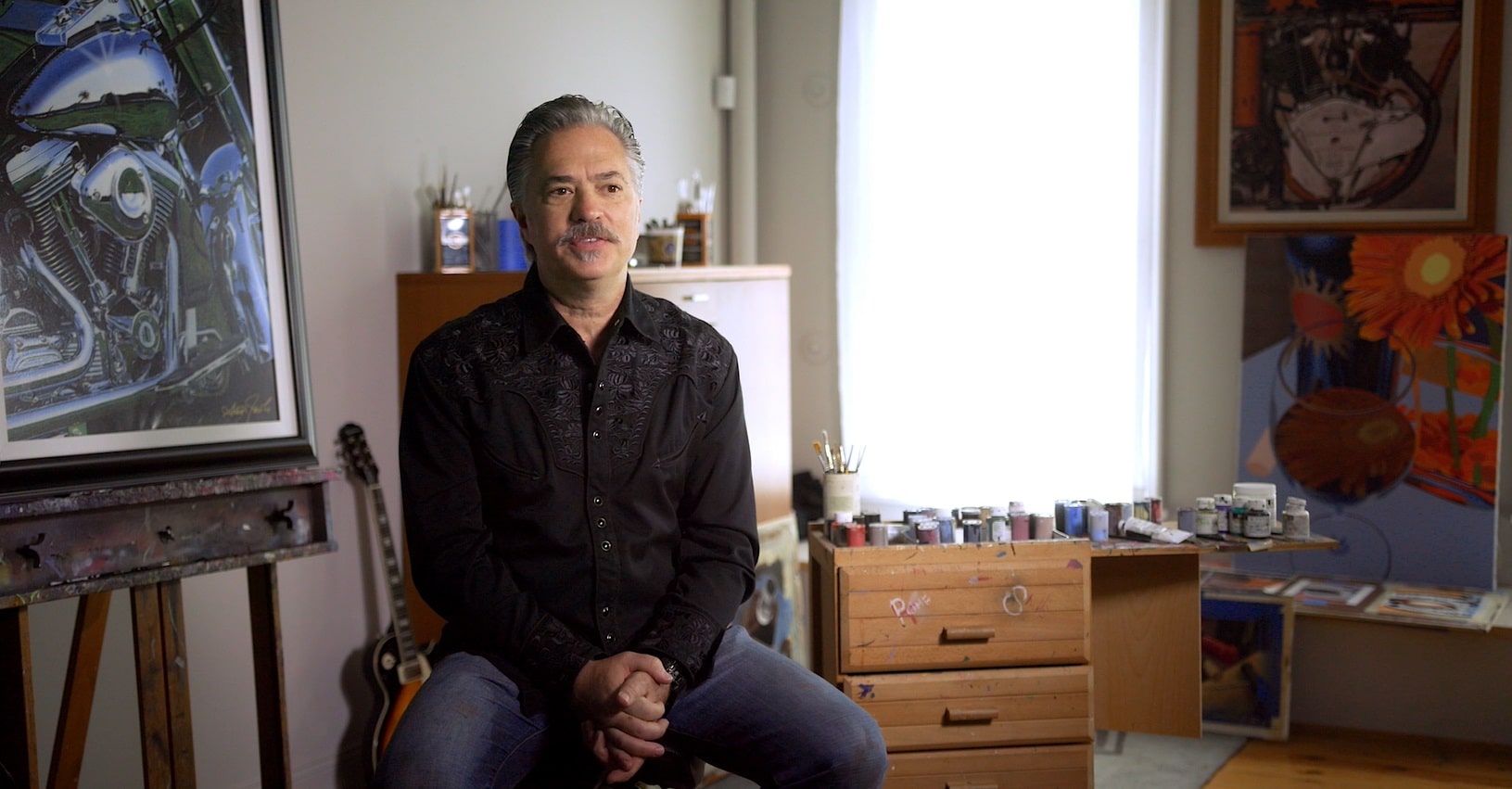 Scott Jacobs embraces freedom, individualism, and rebellion, much like the beloved Harley-Davidson motorcycles he enjoys riding and painting.

Similarly, a look back at Jacobs’ rise to fame demonstrates his clear passion for hard work and trailblazing.

Jacobs enjoyed drawing in his youth, but took his first steps into the art world by working for a framing store in his hometown in New Jersey. He eventually bought the store and made enough money to open his own art gallery named Reflections on Canvas in 1978. 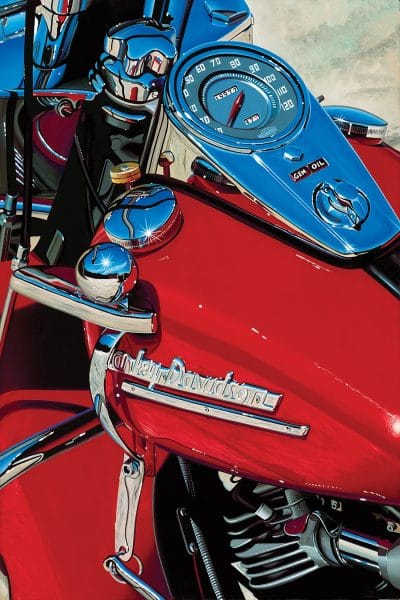 Over a decade later, Jacobs renewed his interest in painting and began exhibiting his own work—with a catch. Jacobs signed his art with the pseudonym “Escoteté” so he could receive unfiltered feedback from collectors. He quickly noticed that they gravitated to his photorealistic works, which sparked his decision to become a professional photorealist artist.

Jacobs soon became well-known for his portraiture, painting celebrities and famous entrepreneurs. Eventually, Jacobs expanded his portfolio and began painting cars and one of his favorite subjects—motorcycles.

In 1993, thanks to the popularity of his motorcycle paintings, Jacobs struck a deal with Harley-Davidson to become their first-ever officially licensed artist. Since then, millions of art lovers around the world have collected Jacobs’ artwork.

The Challenge of Photorealism

Jacobs paints with the goal of creating as detailed of a painting as possible. He will dedicate hundreds of hours on just one painting to make sure it’s accurate, often using brushes that are smaller than the width of a sharpened pencil tip.

The artist frequently uses photographs as the basis for his paintings, but he expands upon and enhances them. 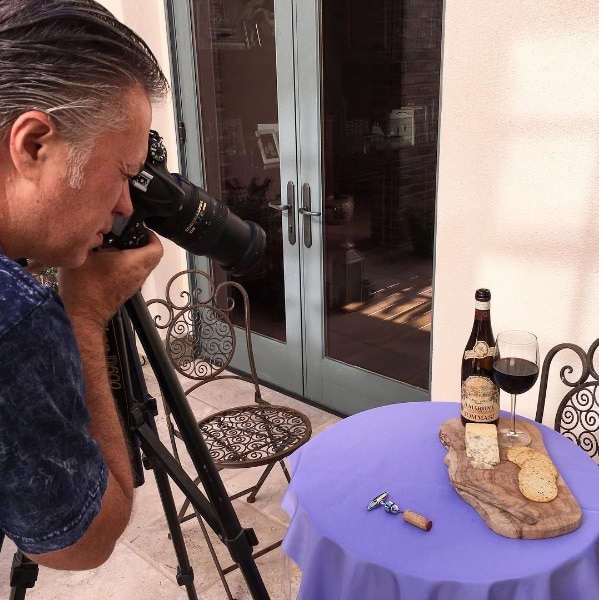 If photorealism wasn’t difficult enough already, Jacobs likes to take his craft even further if his subject seems too easy to depict. The artist welcomes the challenge of adding details like water droplets, intricate lacing, or polished chrome to his paintings, which is no easy task.

“If it comes across as being easy, that means I need to change it some. I need to change or add an element to it that’s crazy,” Jacobs says. “I’m all about the detail on paintings like that.” 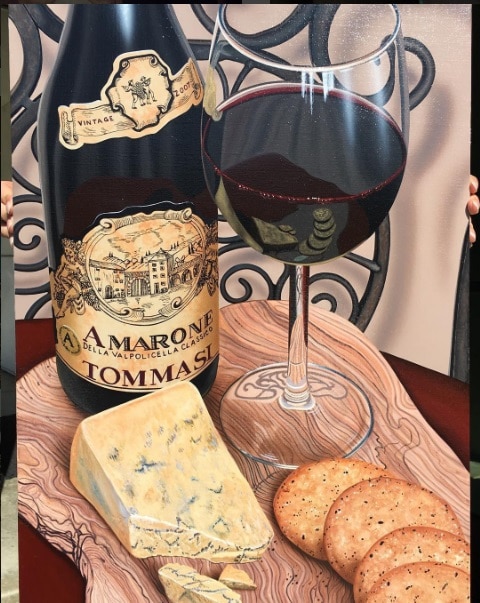 Ideas for his paintings come from his hobbies and everyday life. Many of his motorcycle paintings were inspired by family rides with his two daughters. His series of wine paintings began when Jacobs’ wife was trying to find a wine-themed painting for their kitchen and Jacobs decided to do it himself.

“I paint all the stuff that I love—thank God that a lot of other people like those same things because it’s that love of all these different things that bring us together,” Jacobs says.

A License to Paint

When Jacobs first began painting Harley-Davidson motorcycles, he caught the attention of the company, but not in the way he had hoped. The company initially told him to cease and desist, but he kept painting Harleys anyway. 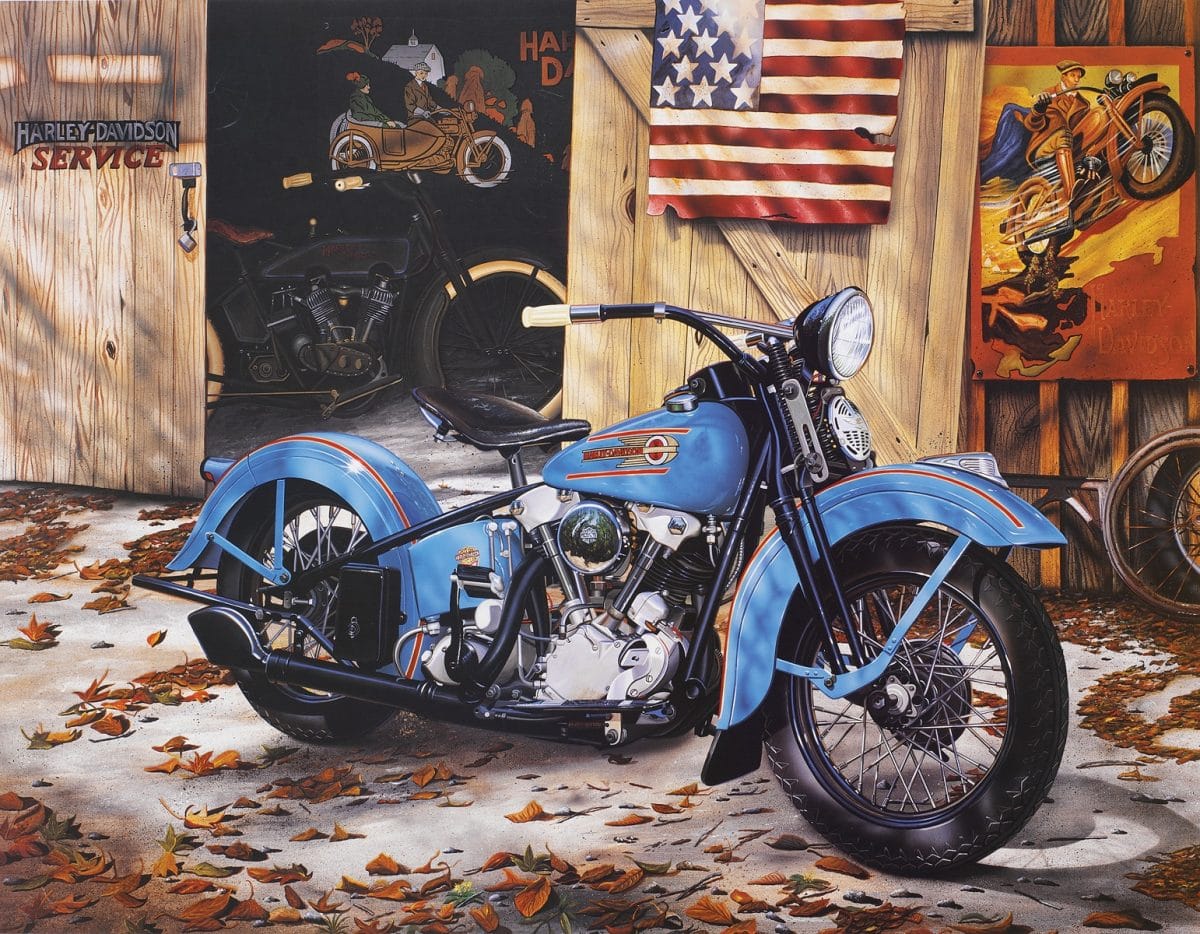 During an art expo in Los Angeles, the company approached Jacobs once again, this time with Harley-Davidson’s president in tow. Instead of shutting Jacobs down, the president decided they should work out a deal. As an official artist for Harley-Davidson, Jacobs has created covers for magazines, designs for thousands of products, and paintings for the annual Sturgis Motorcycle Rally in South Dakota. 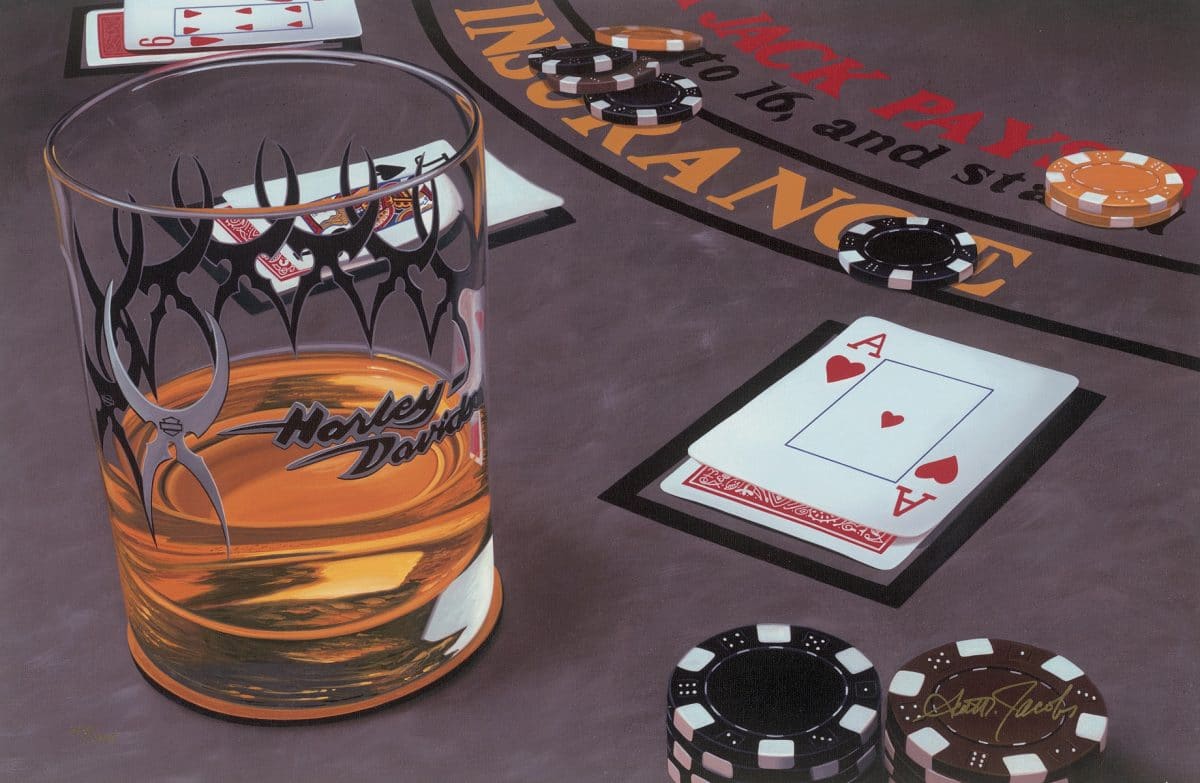 Jacobs has also painted for other major companies and brands, including Chevrolet’s Corvette division, Mattel, Gibson, Taylor Guitars, and the estates of Elvis Presley and Marilyn Monroe.

Jacobs has been so successful with his art that he appeared on an episode of “Jay Leno’s Garage” and starred in an episode of “Secret Millionaire” alongside his daughter, Alexa, where they went to Newark, New Jersey and donated to various local charities.

In 2016, Jacobs and his wife took part in the Motorcycle Cannonball Endurance Run, a race where motorcyclists ride vintage motorcycles across the country. Unfortunately, the race almost cost Jacobs his art career. 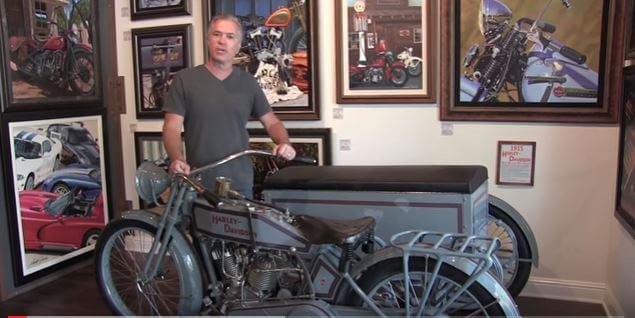 During a portion of the race in Maryland, Jacobs encountered a road full of gravel. His tires became stuck in what is known as “gravel lock” and he had to purposefully take his bike to the ground to stop from careening into an intersection. This resulted in him flying from his motorcycle and breaking his right shoulder. 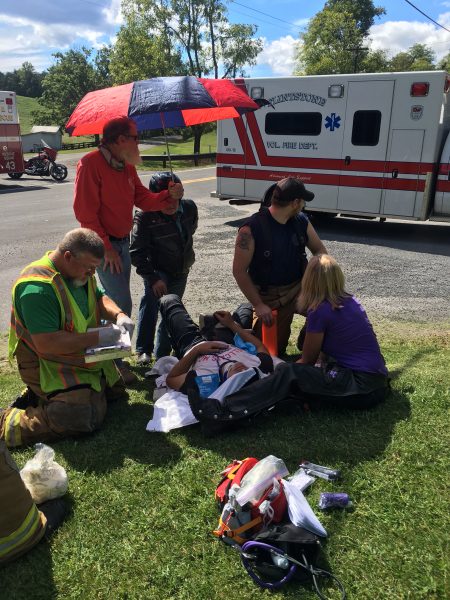 “At the time, I’m lying there, I knew I hurt my right side pretty bad, because I couldn’t move my arm at all,” Jacobs said. “I thought I was paralyzed, laying there on the ground, looking up at the sky, which is really hard to think that that could be my reality.”

Jacobs underwent surgery to insert a titanium rod with an artificial pivoting joint into his arm. After seven months of grueling recovery, Jacobs was finally able to start painting again. 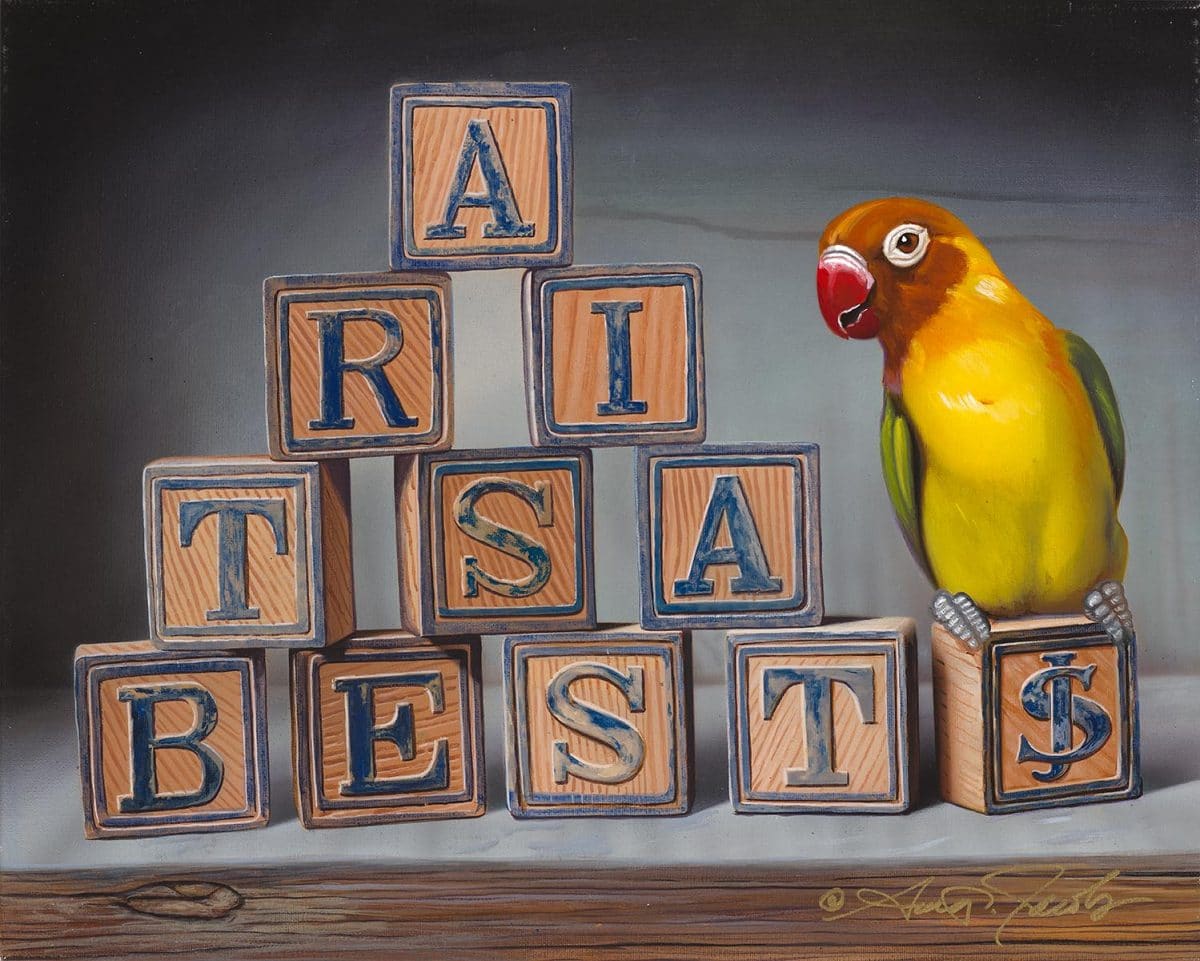 While he isn’t able to work for long periods of time anymore, he has retained his technical virtuosity and his style has become more contemplative. Like one of his artistic heroes, Norman Rockwell, Jacobs seeks to tell a story with his art.

“[Rockwell] didn’t need an explanation; the painting said everything you needed to know,” Jacobs says.

For information on collecting the art of Scott Jacobs, contact our gallery consultants at (800) 521-9654 ext. 4 or sales@parkwestgallery.com. 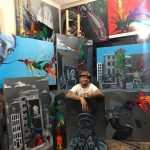 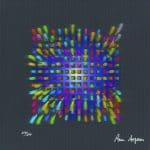