Jacobs does more than replicate photographs—he uses them as a basis to create a work of art that transcends reality. Jacobs’ super-photorealism captures figures in incredible detail by portraying transparent and reflective surfaces like glass and chrome.

With his many inspirations, Jacobs depicts motorcycles, wine bottles, flora, and beautiful women with impeccable accuracy that is admired around the world by critics and collectors alike.

Jacobs grew up in Westfield, New Jersey. He began his career working in an art gallery while he was in high school. Aside from creating illustrations for his high school newspaper, Jacobs did not receive any formal artistic training.

After high school, Jacobs operated an art gallery from the back of a van. He built, carved, and stained the frames for the works he sold from his traveling art gallery. When he was 19, Jacobs purchased an art gallery in New Jersey at below-market price. He successfully worked as an art dealer for the following 25 years.

In 1983, Jacobs met his wife, Sharon, and the two married two years later outside the ruins of a church in Belgium. Following their marriage, Jacobs shelved painting for a time and didn’t pick up a brush until his wife bought him a set of paints, a canvas, and an easel for Christmas in 1989.

Because Jacobs owned his own gallery, he frequently hung some of his own works under the pseudonym “Escoteté” to receive honest feedback from his clients and visitors. While Jacobs had dabbled in abstract and Cubist styles, his photorealistic paintings received the most positive feedback. This inspired him to hone his photorealistic technique.

Jacobs painted celebrities like Joan Lunden, Kathy Ireland, and Malcolm S. Forbes, Senior, but soon desired a new subject. Jacobs’ new subjects stemmed from his passion for automobiles. Jacobs entered a national contest called “My Town” with a detailed painting of a fire truck and won first place. When a friend of Jacobs saw the painting, he suggested Jacobs attempt to paint a Harley-Davidson motorcycle, another hobby. 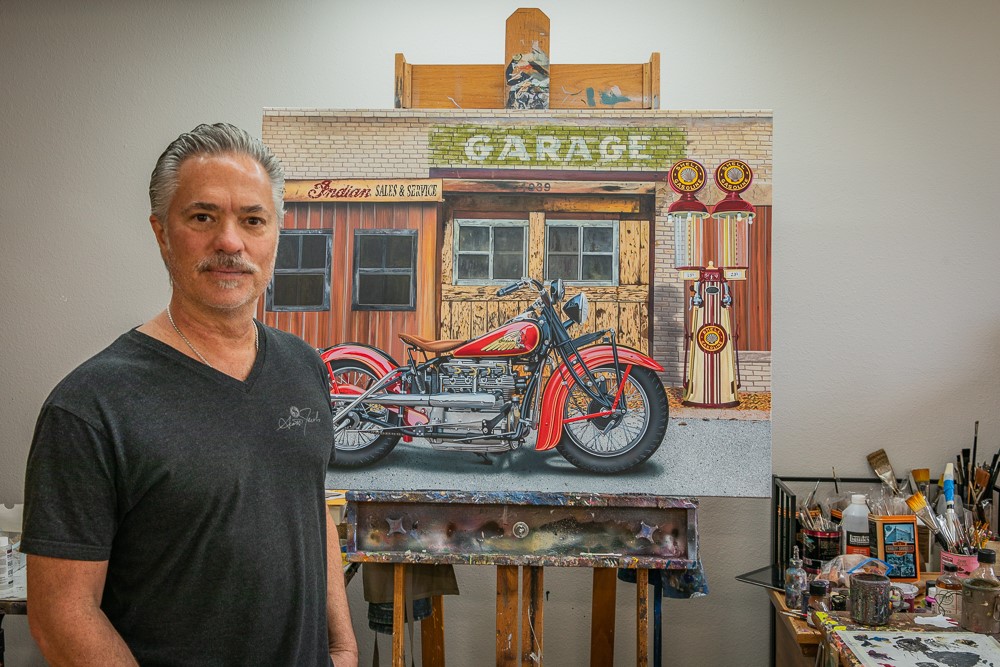 In 2005, Jacobs joined Park West Gallery’s family of artists, exposing his works to a brand new clientele aboard cruise ships around the world.

Jacobs’ family is as integral to his life as his painting. His daughters, Olivia and Alexa, assist with multiple facets of the business and occasionally model for him. His wife, Sharon, works in the business side of Jacobs’ art. Together, they all work as a team.

Motorcycles are more than a subject for Jacobs to paint—it’s a lifestyle. Jacobs’ entire family rides and their trips often serve as creative inspiration. Jacobs and his family often attend Sturgis and Daytona motorcycle events, setting up his work in booths and hotels to share with the riders. Viewers are often surprised that Jacobs paints his art by hand, as they are mistakenly perceived as photographs.

In 2016, Jacobs endured a traumatic injury while participating in the annual Motorcycle Cannonball after encountering unexpected gravel on the road. He landed on his right shoulder and head, resulting in a four-part humerus fracture, 75 percent bicep tear, and a shoulder replacement. Jacobs underwent physical therapy for months before picking up a brush again, refusing to let the accident stop him from enjoying his passion for painting.

In the same year, the Jacobs family moved their art operations from California to Deadwood, South Dakota.

Jacobs begins his paintings with photo references of his subject, focusing on angles and detail. He often works on multiples canvases at a time. He creates a basic line drawing on his canvas before painting, working in layers. He tapes and masks sections to maintain the fine edges and outlines of his subject.

Jacobs uses a small size (000) paint brush—a tip the size of a pencil point—to execute his works. Around 95 percent of the work is done by brush, but occasionally the detail requires some airbrushing. If a painting takes another day or two to perfect, Jacobs has no qualms about dedicating himself to its completion.

“For me, painting is exciting,” Jacobs says. “When you’re about 80 percent done with a painting and it’s really starting to come together, you just can’t wait to finish it.” 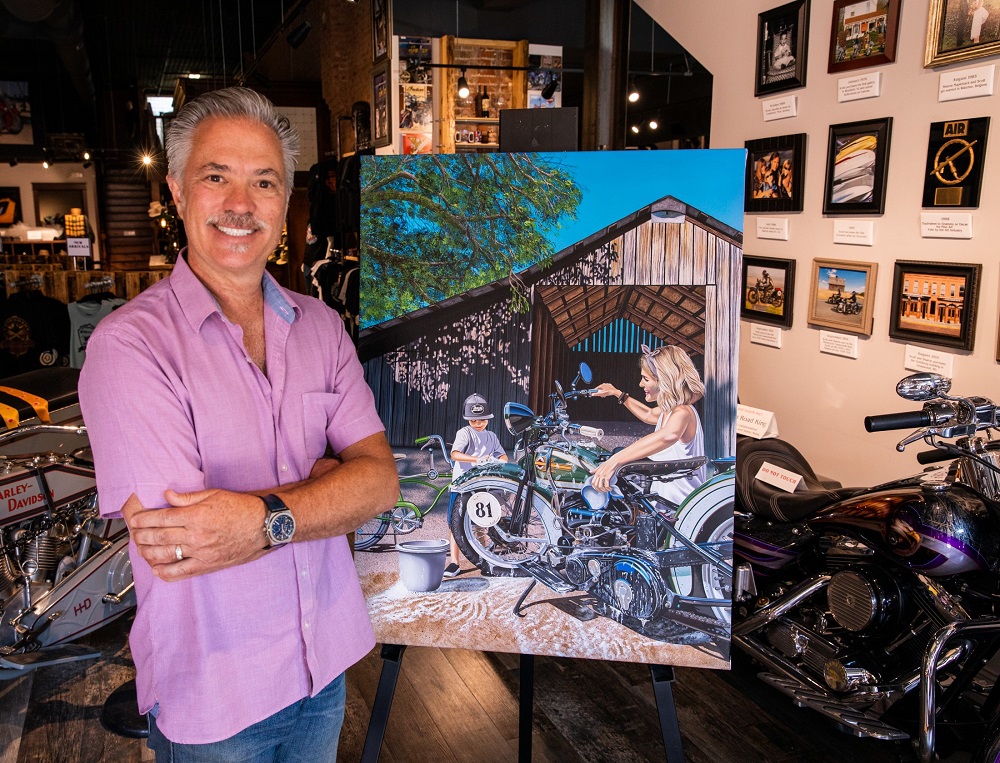 Depending on the canvas and subject, Jacobs spends anywhere from 150 to 700 hours to complete an individual painting. In the ‘80s, he would strive to finish a painting in two or three days. Nowadays, it takes Jacobs two to three months.

When painting motorcycles, the age of the bike will affect the time spent on the painting. Older vintage bikes with elaborate details and general wear-and-tear usually require more attention and extra work. Since Jacobs’ collectors love the subtlety of his paintings—from the particulars of the engines to reflections in the chrome—he uses different techniques to achieve the effect.

Along with motorcycles, Jacobs paints incredibly realistic still lifes of flora, wine bottles, and spirits. The wine bottles originated when Jacobs painted an artwork for his family’s dining room. He had been intrigued by still lifes featuring wine at an art show, so he gave it a try. The results were his first wine-themed works, “Taking a Breather” and “Delicious.” Wine and spirits have become a regular part of Jacobs’ repertoire.

Jacobs’ oeuvre also includes portraits of veiled or masked women. Jacobs says he was influenced by watching his family try on different masks while travelling in Venice, Italy.

“I’ve always tried to challenge myself, I think that is what makes me unique,” Jacobs says. “If I paint a flower, it’s not just a flower, it’s a flower with hundreds of water drops all over it.”

We love any opportunity to get our collectors and artists together in the same room. While this has become more challenging over the past two years, our exclusive VIP auction weekends are [...]

In 1993, thanks to his amazing hyper-real painting style, artist Scott Jacobs became the first licensed artist in Harley-Davidson history and, almost 30 years later, he continues to create [...]