Ian Hamlin, principal auctioneer, is originally from Johannesburg, South Africa. Currently, he resides in Kloof, just outside of Durban, with his wife and Auctioneer Assistant, Lydie. During their vacations in the summer, they visit Lydie’s hometown of Koberice, Czech Republic. Ian and Lydie have been working at sea since 2007. Not only are they swashbuckling art auctioneers, but Ian has climbed some of the highest mountains in the world. Ian and Lydie looking sharp after a day in the gallery. Photo credit: Ian Hamlin

What do you like most about being an auctioneer?
Ian: I enjoy being surrounded by some of the worlds’ greatest artists, being right on the edge of the newest and greatest artist discoveries and, most importantly, being able to make the art world accessible to everyone to enjoy and collect.

Who is your favorite Park West artist and why?
Ian: Peter Max has to be my number one, for many, many reasons. Besides the fact I love his work, I love it specifically for what he and the artwork stand for: making the world a better place for everyone. I admire his philanthropy and his creativity. Most of all, I love his use of color. It’s so simple, so unique and so Max!

What is your favorite guest memory?
Ian: What does spring to mind is a young boy by the name of Joel. He and his family cruised with us on the Celebrity Reflection. At the age of 11 he immediately hit it off with both Lydie and me, and subsequently attended every event we held that cruise. Eventually, he dragged his dad and mom into meet us and they fell in love with a couple of very special works. At the end of the cruise we “high fived” and he left with his family.

One year later, I was sitting in the gallery on the Celebrity Equinox and in comes a slightly older Joel. Needless to say, first auction, there was Joel in the front row, beaming with excitement and anticipation. This time he had even managed to drag his dad along, who I got to know better. We both have a passion for watches. By the end, his parents expanded their collection with two incredible works of art. Even if they had decided not to collect art that cruise, Joel would still be a highlight of our career.

I am still in contact with both Dad and Joel. His dad let me know that Joel actually chose an art history course in school due to the art world being opened up and made accessible to him via Park West Gallery. What has been your favorite port?
Ian: With a 104 countries the choices are almost endless. The highlights are rushing to see as much of New York as we can every time we are there, the Choo Choo bar in Warnemunde in Germany for the greatest bratwurst, San Juan for the best martini ever, and Aruba for ceviche.

Can you tell us about your climb up Mt. Everest?
Ian: We climbed to Everest base camp, via the Sumit of Kala Patthar, one of the peaks in the Himilayas. I got the bug after climbing the highest mountain in Africa: Kilimanjaro. Next, I decided I would climb to Everest Base Camp. To reach the summit costs a fortune and you run a 10 percent chance of dying even with preparing for a year. Coenrad Willemse, another art auctioneer, was my only friend who was brave enough to join me.

In September 2013, we started our epic adventure by flying into Lukla. We landed on the side of a mountain in one piece and started our trek up to base camp. We spent 15 days on the mountain in breathtaking beauty with minimal oxygen at over 4800 meters (15,700 feet). We summited a peak near base camp, Kala Patthar at 5545 meters (18,200 feet). Afterwards, I got the second flight out of Lukla to Kathmandu and was home for mine and Lydie’s wedding. Then it was a whirlwind honeymoon in the United Kingdom and back to the ships! 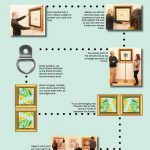 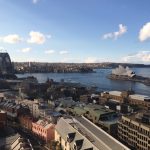