I was with Marcel Mouly in Paris last November 2007 at a favorite restaurant of Marcel’s a few blocks from Arts Litho, the atelier where Marcel worked creating his lithographs for so many years.

And although an air of optimism abounded as we all took in how great he looked and seemed, the inevitable understanding that this might be the last time any of us would see him again shrouded us all.

The photograph shown here is no doubt one of the last taken of him as he died just a few weeks later. As I look at it, it fills me with conflicting feelings and emotions. In it I see a smiling me, all optimism and posing for the camera and although I am aware that I have more yesterdays than tomorrows in my own life’s story, I am still looking forward to many more years of the richness that life has to offer.

In Marcel, I see the face of a man who has already confronted his inevitable destiny. He looks frail and wan, and although he was obviously not feeling well, he soldiered on that evening, laughing, telling stories, drinking his beloved scotch, and showing all of us so unfailingly, that no matter what lies ahead for us, we must grasp every moment of life fully and embrace the time we are given as an irreplaceable gift.

That night as we sat together at dinner I noticed the fresh paint on his hands and under his nails. I told him of how I had just returned from visiting Marseille and how we went to Cezanne’s studio in Aix en Provence. There in that little room, Cezanne had created some of the most influential paintings in the history of modern art. There, I touched the table where he laid out his still life props, the table that occupies so many of those paintings I have contemplated in museums and books. I touched the box of paints that lies next to his easel, the box of paints from which so much of modern art has sprung.

As I told Marcel of this and he sensed my excitement, I saw his eyes light up and I glimpsed a spark of that same passion in him as a younger man. He smiled and shook his fist and put it down on the table and said, “Ah Cezanne…he was ‘The Rock.'”

As we all got up to leave that night, we one by one hugged him and told him we’d be coming back for his 90th birthday party in February. But this was not to be.

Instead we all have our memories of that night together, and of course, his art.

Rest in peace, Marcel. You will always be ‘The Rock’ for me. 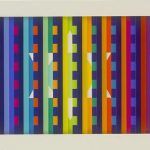