Today, September 30, those of the Jewish faith will celebrate the holiday of Rosh Hashanah – the Jewish New Year. It is a time of festivity but also a time of reflection and resolution for the upcoming year. Following are some words from Park West Gallery artist, Yaacov Agam, discussing his Jewish heritage which so influences and reflects in his artwork.

“My Father was a rabbi, a great spiritualist. He always used to say, ‘God is all-powered and does things as he wills.’ As I remember him, he was always either at the synagogue or writing one of his books. He wrote several on Jewish philosophy and religion. Most of his thinking and writing was associated with deep Jewish spirituality and cabalistic concerns, and on his working table there were always to be found many rare old books of Jewish wisdom; I could hardly understand a sentence of them when I tried to read them.

I cannot recall seeing him eating during daytime, and twice a week on Monday and Thursday he would not eat at all, following an old Jewish tradition. His fasting was well known, and I remember that doctors showed interest in his case; he had managed to reduce the influence of physical and material factors on his spirituality as much as possible. My father was after me all the time to say my prayers three times a day, morning, afternoon, and evening and after each meal as well. It became really annoying to me, but my father was very insistent. For my parents the most important thing was to be good Jews that is to say, to live according to the values and traditions of the Jewish people.

In Judaism time and reality are interconnected. My intention was to create a work of art which would transcend the visible, which cannot be perceived except in stages, with the understanding that it is a partial revelation and not the perpetuation of the existing. My aim is to show what can be seen within the limits of possibility which exists in the midst of coming into being.

Art is the mirror of reality. At times it tried to depict the form of divinity, and did not confine itself to the worship of beauty. Whether it was an idol, the likeness of a Pharaoh, or the figure of Jesus, it represented the image of divinity to the people. The special significance of Judaism is the unity of God and its conception that all the world is in Him. This form, then, must be special, for it must be identical with the Hebrew conception of reality.

Although I have struggled with universal plastic values in order to put my experiments within the framework of a common language, I must stress once again that the key to my work is the attempt to give plastic definition to the concept of Hebrew realism beyond the limits of religion and to open the gateway which leads to reality.” 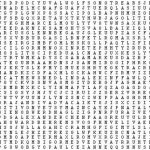