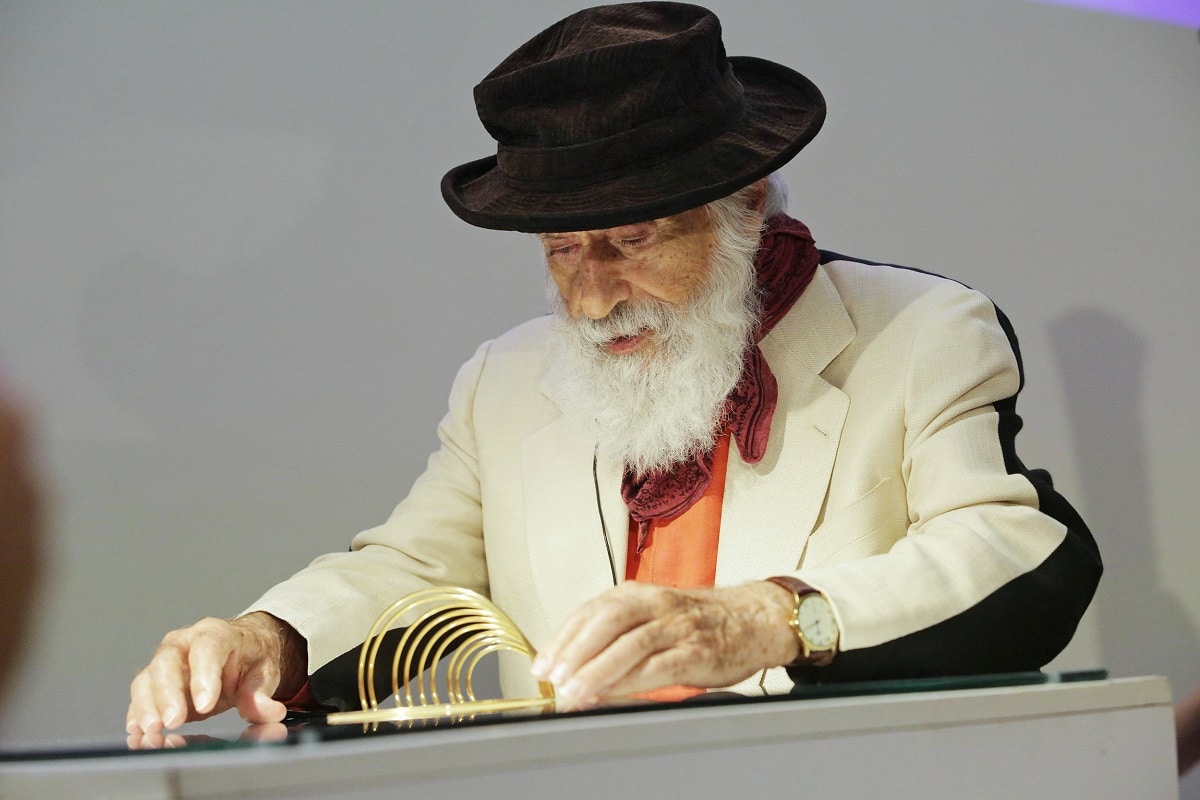 “For twenty years, I tried, and finally I understood,
the image must be something that becomes,
not something that is.
Where is truth, where is the true order?
The only truth is the truth of states of being,
and the passage of time which destroys itself.”
—YAACOV AGAM, 1971

“Genius” is a hard word to substantiate, as these days in our transient and disposable culture it is often thrown about in reference to all sorts of people from all walks of life. But too often, sadly, novelty is confused with quality.

In the case of 81-year-old artist Yaacov Agam, the word “genius” only touches the surface. The world is filled with his art. From giant installations found in places as far flung as Taipei, Jerusalem and New York City, to individual objects that grace the collections of his devotees from all over the world, Agam has made his mark, which will not be erased from history.

Born in 1921 as the son of an Orthodox rabbi, Agam’s consciousness was always shrouded in mysticism. Steeped in the Kabbala along with the spiritual writings of Wassily Kandinsky and the conceptual revolutions of form and color developed by Johannes Itten and Josef Albers, Agam emerged with an art form independent from all others. In Agam’s art there is a departure from traditional forms of visual expression. In conventional art, everything is visible. Agam’s art strives to capture the invisible; the possible but not yet experienced, and in this way the infinite. 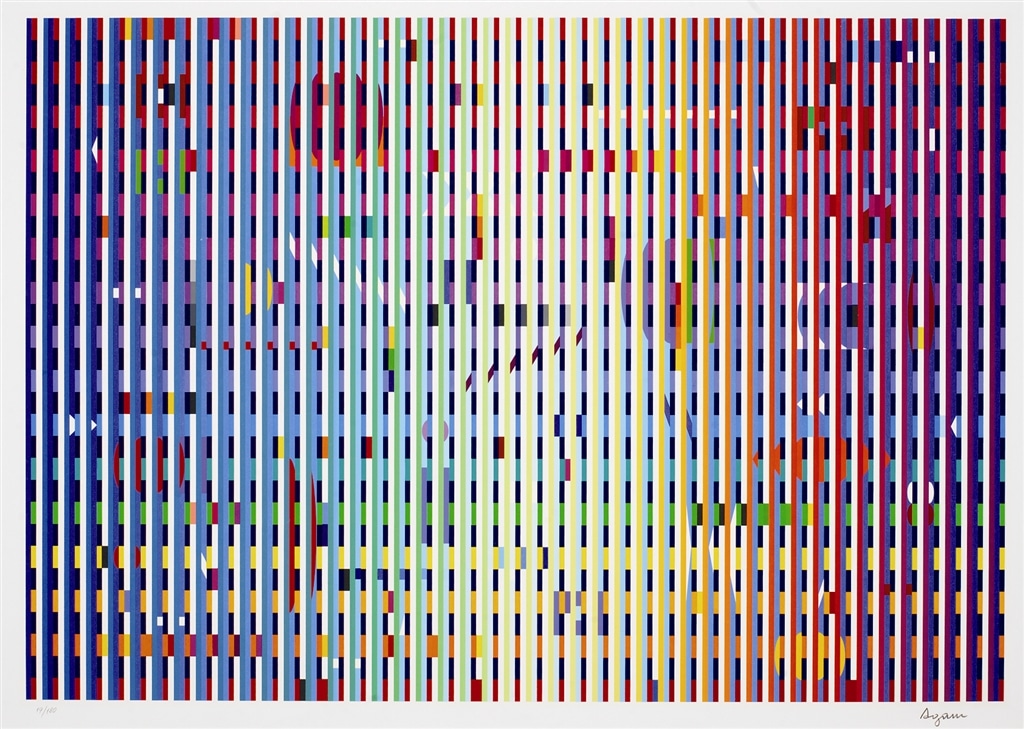 Agam says, “I am not an abstract artist… Abstract art shows a situation on a canvas. I show a state of being which does not exist, the imperceptible absence of an image… The infinity of possibilities, opposing the chance of a presence, a possibility.”

When one encounters an Agam work, an indefinable experience occurs. Rather than in the traditional artistic experience—where the viewer passively absorbs what the artist has created—in Agam’s art the viewer and the artwork merge. The artwork cannot appear, or come into being, without the participation of the viewer; the creative process and the aesthetic experienced are mingled, and inseparable from one another. The work of art does not exist unless the viewer is engaged and thereby involved in creating its existence.

Walk past a work of Agam’s and take in the intricate number of manifestations and visible expressions that appear as you move before it. Slide a moveable element from side to side and watch imagery appear from “nowhere,” suddenly and momentarily visible until another millimeter of movement is induced and it vanishes, only to be replaced by yet another visual surprise. Touch a sculpture by Agam and rearrange its elements into yet another of the infinite number of three-dimensional compositions which may be created. All of these experiences are what defines his art, and his genius. 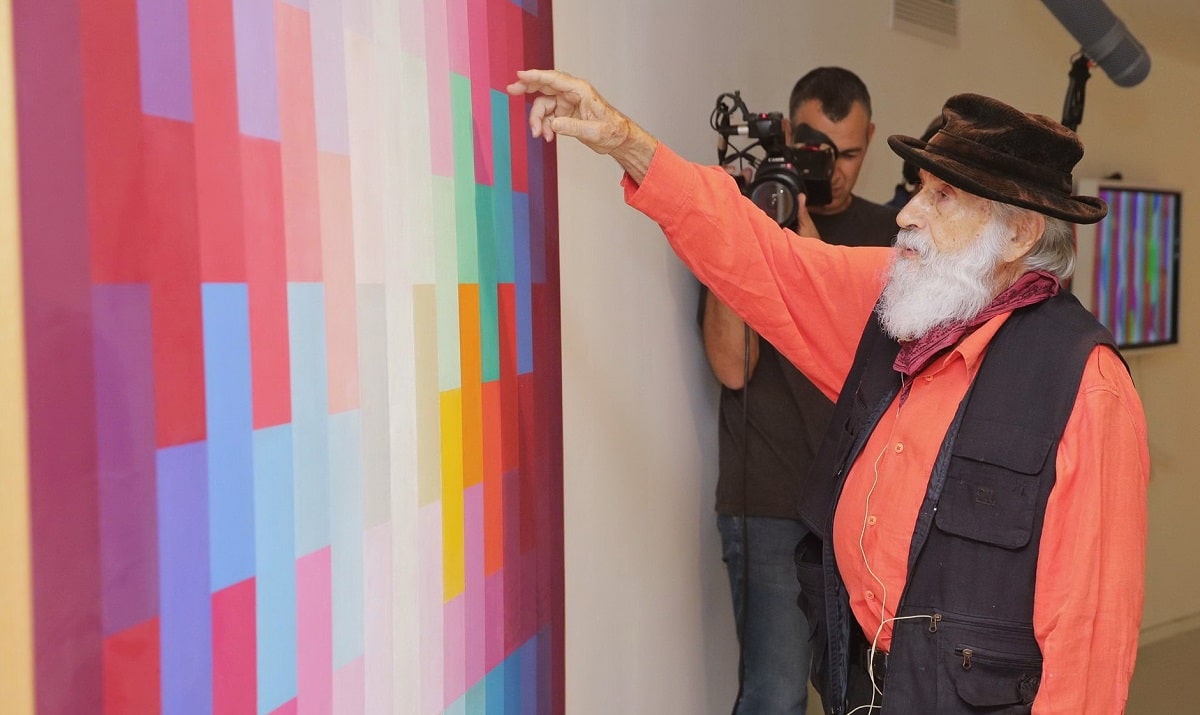 His colors are of the rainbow, God’s first work of art given to man in a pact with Noah (Agam describes the “phenomenon of light” as “inexplicable.”). His forms and structures are marvels of simplicity and simultaneous complexity. His “polymorphic” paintings and multiples are merely corrugations with color adhered to the sides, and yet their purity and simplicity point to profound and universal mysteries discovered in the appearance and disappearance of things.

In 1964, Agam wrote his artistic credo. Fully formed and unchanged since that time, it has provided the inexhaustible wellspring of his art and sustained him for nearly 50 years, without limitation. He says in it, “My intention was to create a work of art which would transcend the visible, which cannot be perceived except in stages, with the understanding that it is a partial revelation and not the perpetuation of the existing. My aim is to show what can be seen within the limits of possibility which exists in the midst of coming into being.”

It is through Agam that the aesthetic narrative was re-engaged after having been cast aside by the conceptualists. He has taken up the thread of aesthetic beauty, added the notion of time, space and the infinite, and forged his place in the pantheon of the geniuses of art history.

Park West Gallery is honored to have had a relationship with this contemporary master for over 30 years and to present his artworks to our clients, who continue to enthusiastically embrace his astonishing and unforgettable creations. 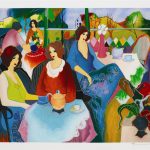