Andrew Bone continues to astonish. The African conservationist, painter and adventurer has achieved yet another benchmark in his career. He recently painted a “life-size” (54″ x 95″) African elephant on canvas. The painting, which he titled African Majesty creates an unmatched experience while standing before it.

Artist and conservationist, Andrew Bone (far right) at Park West Gallery with the collectors of his life-size painting of an African Elephant, “African Majesty.”

“One truly has the feeling of encountering this majestic animal in the flesh,” commented Park West Gallery Director, Morris Shapiro who assisted the collectors of the painting in July 2010 with their acquisition.

“Andrew was actually charged by this bull in the wild, and he captured the energy of that dramatic moment so powerfully,” said Shapiro.

“When I first encountered it, I was awed by the sheer size of the animal and as I moved before it, his liquid eyes appeared to follow me from side to side. I don’t know if an artist has ever painted a life-size elephant head before, but I doubt it. A special canvas had to be ordered for the painting and Andrew had some remarkable physical challenges in creating the work.”

The artist commented about his work:

“The creation of ‘African Majesty’ was challenging on numerous levels. The size was larger than ever attempted before, the proportions of the animal had to be perfect, and the piece needed character.

I had to make fundamental changes to my studio. Everything went on wheels to get from one end of the painting to another, the brushes got bigger and the canvas had to be hung on a bar in order to move it off the easel when I was not working on it. I mixed enough pigment to last for the 8 months it would take me to complete the piece and began the first rudimentary brush strokes.

Any artist will testify that the most satisfying part of creating a piece is seeing the art finally framed and hung. This was more so in the case of ‘African Majesty.’ The painting was enormous, bold and real – becoming of the most spectacular animal in the world.

In the fall of 2010 Bone will be embarking on one of the most arduous adventures of his life. He will be traversing the entire length of the Zambezi River (1,500 miles) by canoe. The journey, which will originate at the river source in the Congo and end at the Indian Ocean, will take months, but will allow Andrew an unprecedented access to subjects for his paintings. Bone will also be accompanied by a film crew who will capture the adventure for an upcoming National Geographic documentary.

For more information on Andrew Bone’s remarkable life and artwork, visit his website at http://andrewbone.com 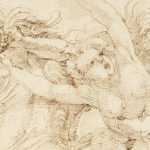