Valentine’s Day is Really May 3rd, and Other Strange Truths About the Holiday

Secret Marriages, Medieval Poetry, and Why Valentine’s Day is actually May 3rd

February 14, 2012 has arrived! Couples everywhere are planning their big night out while singles are prepping their Chinese take-out menus and Netflix queue. But no matter what, on this romance-tinged Tuesday evening, love will be in the air.

But was this always the case? Has this been such a loaded holiday throughout history? Or is this a day, as they say, “invented by the greeting card companies?”

We’ve consulted the Internet, the vast (and occasionally reliable) wealth of digital information and want to convey a bit of history this Valentine’s Day. We were happily surprised by what we found.

One. There are quite a lot of Saint Valentines and their stories aren’t always so romantic.

According to History.com, the most popular legend of Saint Valentine was about a 3rd century Roman priest that performed secret marriages for young lovers. Emperor Claudius II had outlawed marriage, stating that single men made better soldiers. Valentine was imprisoned and sentenced to death. Before he died, he is rumored to have written the very first “Valentine” to the jailor’s daughter, signing it “From your Valentine.”

Others’ stories recall tales of dissident priests that were burned at the stake, bishops that were able to cure blindness, a priest who cured the blind jailor’s daughter, a bishop that was beheaded after helping soldiers escape from prison… They’ve all begun to meld together, as cultural legends do.

This one’s our favorite. According to Henry Ansgar Kelly, Director of the UCLA Center for Medieval and Renaissance Studies, there’s a reason why lovebirds and flowers feel out of place in February. In his book, Chaucer and the Cult of Saint Valentine (Leiden: E. J. Brill, 1986) Kelly states that Valentine’s Day was first romanticized by Geoffrey Chaucer, the medieval poet famous for his Canterbury Tales.

In 1381, Chaucer was employed by the court of King Richard II of England. King Richard announced his engagement to Anne of Bohemia on May 3rd after a competitive courtship. One year later, Chaucer wrote The Parliament of Fowls (a poem about springtime love comparing the mating of birds and humans) to lovingly commemorate their first anniversary. Connecting the anniversary with a feast day (the customary thing to do), Chaucer mistook Saint Valentine of Genoa for the more widely celebrated Saint Valentine of Rome, commencing Genoa’s May 3rd feast day as a date for romantic celebration.

When we were in elementary school making googly-eyes at the one we’ve had a crush on since first grade… what did we write?

Roses are red,
Violets are blue,
Ice cream is sweet
And so are you!

…or something along these lines. Unless maybe you were the next Ezra Pound or Gertrude Stein as a kindergartner, a total literary genius. But for the rest of the world, our poems looked like this. Where did they come from, these red roses and blue violets?

According to The Oxford Dictionary of Nursery Rhymes (Oxford University Press, 1951), the first version of this children’s poem appears in Joseph Ritson’s Gammer Gurton’s Garland, or the Nursery Parnassus (London, 1784):

The rose is red, the violet’s blue
The honey’s sweet, and so are you
Thou are my love and I am thine
I drew thee to my Valentine
The lot was cast and then I drew
And Fortune said it shou’d be you.

She bath’d with roses red, and violets blew,
And all the sweetest flowres, that in the forrest grew.

And now you know. Sappy mothers and childhood crushes everywhere owe Edmund Spenser and Joseph Ritson a round of applause for providing them with literary fodder for centuries to come.

So if your search for true love comes up short this Valentine’s Day, just remember the immortal words of Shakespeare: “The course of true love never did run smooth.”

Fine artwork by Lucelle Raad, Scott Jacobs, Misha Lenn, and Rembrandt van Rijn is available for purchase through Park West Gallery and its cruise art auctions at sea. To learn more about these and other Park West Gallery artists, please visit our Discover the Artists page and begin your exploration. 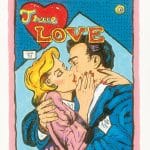 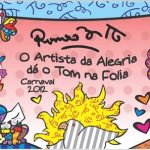