INDIANAPOLIS – Thomas Kinkade, renowned artist known as The Painter of LightTM, has been named the featured artist for the Indianapolis Motor Speedway Centennial Era, a three-year celebration that kicks off with the Centennial Era Gala this month.

To capture the excitement, color and thrill of the Speedway on canvas, the artist will create a new Studio Masterwork, Indianapolis Motor Speedway, 100th Anniversary (working title), that will become the cover for the collectible 2009 Indianapolis 500 Program. The new Studio Masterwork will be unveiled Feb. 27 at the Centennial Era Gala, for which Kinkade also has created the original artwork for the program cover.

“Imagine an image that details the running of the Indy 500 – but incorporates the cars from the past through today!” Kinkade said. “It will include the magnificence of the famous Pagoda, the historical significance of the Brickyard – and of course the city of Indianapolis in the distance. What the Hulman-George family envisioned when it purchased the Speedway in 1945 through all of the changes – right up to today – will be commemorated in this special piece of artwork. It is a historical encapsulation – celebrating the icons of America’s first and still its most prestigious raceway.”

In addition to the Masterwork, Kinkade has created a colorful and exuberant Impressionist work for the Centennial Era Gala program cover. Capturing all the excitement of Indy at a moment in time as cars flash by the stands, American flags flying on a perfect Memorial Day weekend of blue skies and fluffy clouds, it is the perfect expression of the thrill of racing that millions of fans will find easily identifiable.

Celebrating his 25th anniversary as a published artist in 2009, Kinkade is today’s most widely collected living artist. He is known around the world for his tranquil, light-infused paintings that affirm the basic values of family, faith and the beauty of nature.

Kinkade has received numerous accolades for his works on and off the canvas, including multiple National Association of Limited Edition Dealers (NALED) awards for Artist of the Year, Graphic Artist of the Year, and nine awards for Lithograph of the Year. He has commemorated a number of important milestones in American heritage, including the Salt Lake City 2002 Olympic Winter Games, Disneyland’s 50th Anniversary, the 85th Farewell Season of Yankee Stadium, Graceland’s 50th Anniversary and others. He is also involved in a number of nonprofit organizations focusing on children, humanitarian relief and the arts. Read the full press release 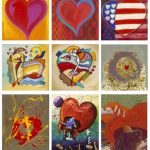 Love is in the AirArtists & Special Collections 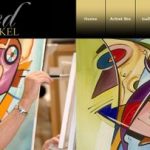